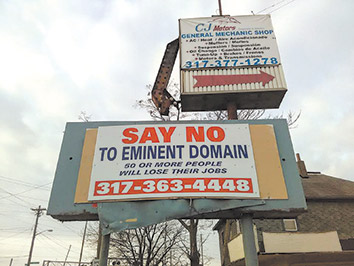 Thousands each day drive past a sign on Sherman Avenue near 25th Street in Indianapolis bearing an unequivocal statement of Sheena Schmidt’s sentiments and an irritant for some city officials — a billboard-like placard that reads, “Say no to eminent domain.”

The sign rises above some of the commercial and industrial properties that Schmidt parceled together after she immigrated from Scotland in the 1970s with her husband, who’s now deceased, and, she says, with $28 in her pocket. It’s some of the same land the Indianapolis Public Library now wants for a new library branch across the street from its current location in a shopping center next to a Safeway grocery store.

The library asked the Indianapolis City-County Council for authority to use eminent domain to condemn property for a new branch, but the council hasn’t approved. Last summer, the council gave the library more time to negotiate with Brightwood property owners, but the city hasn’t taken the threat of eminent domain off the table.

“I’m sitting in limbo and can’t do anything. … You try running a business at 74 years old with that threat over your head,” said Schmidt, who’s also battling serious health issues.

Indianapolis Public Library CEO Jackie Nytes said the Brightwood community wants a new branch that could be a catalyst for economic development in one of the city’s poorest neighborhoods. She disputed Schmidt’s assertion that the library hasn’t made reasonable offers to purchase property she owns.

“I would argue no one stands to lose money from this,” Nytes said, noting the library has obtained purchase options from some landowners in the neighborhood. “We have several willing sellers who have been extremely patient. … We’re hoping we can come to some sort of acceptable agreement with others.

“We’re more than open to what people have asked for their property,” she said. I think we’ve got a difference of opinion on those values.”

City-County Councilman Zach Adamson represents the Brightwood community and supports the library plan, even if taking land by eminent domain becomes necessary. He and Nytes said a new library would improve the community and expand educational opportunities. There’s no reason Brightwood residents shouldn’t have access to a library with amenities as nice as those in new branches elsewhere around the city, they said, particularly since the library has bond proceeds to build.

“It is clear this community has suffered through the last several decades because of a lack of investment (by) our city leadership,” said Adamson, a Democrat. He said the entire community would benefit from the new branch, and could lead to “several tens of millions” of dollars in future investments in the area.

The library says a 15,000-square foot branch planned for Brightwood would cost $5.9 million to build and would require about 4 acres of land. Nytes said the community wants the branch be located in the original platted sections of Brightwood, bounded roughly by Sherman Drive and Station Street south of 25th Street to the CSX Railroad tracks. The new branch would be bigger with new computer labs, meeting spaces and other amenities.

But Schmidt’s attorney, Andy Buroker of Faegre Baker Daniels LLP, said the library has ready access to acres of vacant, buildable land just on the other side of Sherman Street adjacent to Brightwood Plaza, where its current branch is located. He also wonders whether a library branch is the highest, best and safest use for frontage on a heavily traveled, high-density commercial corridor.

“It just doesn’t seem to fit there,” he said of the library’s preferred site.

Is the price right?

Buroker disagreed with the library’s assertion that Schmidt had been offered adequate compensation for property she owns that could be purchased or impaired by the library’s relocation. “It’s the age-old issue in eminent domain proceedings,” he said, “estimating what it would take to relocate” to a similar situation elsewhere.

In the case of one building, Buroker said those costs would be five to 10 times more than the library has offered. Schmidt said the library isn’t considering interior upgrades and investments that would have to be replicated in a new location.

Meantime, Schmidt said the ongoing dispute with the city has cost her about $60,000 in legal bills.

Properties Schmidt owns where the library is looking at potential sites are leased for auto body shops, day care facilities, a recording studio and other uses. Some might appear worn, Schmidt said, but they provide steady work and opportunity at low rents for dozens of lower-income people. Her own business is the manufacture of a water-based rubber-glue product that’s mixed in a facility in Brightwood and shipped to buyers around the world.

“We keep a low profile,” she said.

Adamson said there’s no danger of eminent domain being overused to deprive owners of the value of their property. He’d prefer the library come to terms with property owners, but if an agreement can’t be reached, the council shouldn’t be afraid to authorize a taking by eminent domain.

“In this particular instance, I think there’s definitely a danger of allowing some property owners who are really just holding out for what I would consider to be extortion from the city,” Adamson said. For at least one parcel, he said Schmidt had been offered four times the assessed value of the property. He also called the sign above Schmidt’s property “propaganda.”

Nytes also disputed the number of jobs the sign claims could be lost — 50 — if the businesses are forced out.

“I can’t get in a tit-for-tat argument with a property owner,” she said. “I have indicated publicly that I don’t share that particular property owner’s assessment of things.”

The library and Schmidt also disagree about the library’s potential to influence commercial development in the area.

Nytes said supporters of the library plan want development to spur from 25th and Sherman and spread to Station Street, the historical center of the Brightwood community. “They see us as an anchor in making that happen,” she said.

But Schmidt said the library’s plans were an anchor that sank potential commercial development. She said she had contacts from developers interested in buying property she owns, including from a developer looking into building an AutoZone store. But after learning of the library’s plans, she said, that interest ceased.

“It stops all investment,” Buroker said of the looming threat of eminent domain. “It’s very challenging to lease to somebody and have an investment-based expectation. … It just continues to drag on.”

Nytes said eminent domain was never mentioned to people she spoke with who were looking into commercial development on the site.

“I never mentioned eminent domain to any of those folks because at the time, I was against using it and still assumed we could negotiate this,” she said. “The Library Board only asked me to proceed with requesting eminent domain much later, after two years of negotiations were still not producing a final deal.”•