Texas Roadhouse has a prime beef with Texas Corral restaurants, claiming in a federal lawsuit that from their look and feel to their logos and building designs, the smaller Indiana-based chain is all hat, no cattle.

So far, the judge and magistrate presiding over the case in the Northern District of Indiana have leaned in Texas Roadhouse’s direction. In recent weeks, rulings in the three-year-old case before Judge Joseph S. Van Bokkelen denied Texas Corral’s motion to dismiss and granted Texas Roadhouse’s motions to compel discovery, and partially granted its motion for expenses including legal fees associated with discovery disputes.

“Texas Corral’s use of trade dress that is substantially similar or identical to Texas Roadhouse’s trade dress has caused or is likely to cause confusion or mistake, or to deceive customers as to the affiliation, connection, or association of its products or as to the origin, sponsorship, or approval by Texas Roadhouse of Texas Corral’s products, services, or commercial activities,” the suit claims. It seeks monetary damages and an order Texas Corral cease infringing on trade dress or trademarks.

“We take a lot of pride in the food and the service we provide,” Texas Roadhouse in-house counsel Mike Henry said of defending the company’s trademarks and trade dress through litigation. 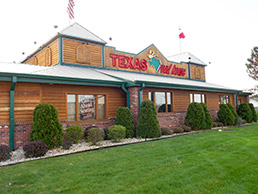 “What we were seeing is consumers being confused between the two brands,” said St. Louis attorney Scott Eidson, who’s lead counsel for Texas Roadhouse in this litigation.

Company officials said the chain continues to field complaints from Texas Corral customers, and even vendors have occasionally confused the chains while making deliveries.

He said the much larger Texas Roadhouse chain is trying to drive his clients out of business through litigation.

“We’re a small Indiana-based group of restaurants that are family-owned, and they’re a publicly traded company with a mix of franchise and corporate-owned stores,” Fardy said. Texas Corral operates 10 restaurants — six in Indiana and two each in Illinois and Michigan — while Texas Roadhouse claims 520 in 49 states, about 85 percent corporate-owned. 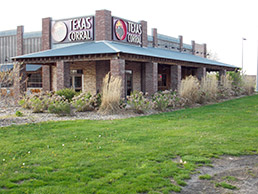 Texas Roadhouse also claims Texas Corral’s restaurants’ design and features are too similar to its own and confusing to customers. (IL Photo/Dave Stafford)

“Really the crux of the case is these are two competing businesses that have been competing for quite some time, and they use similar elements that have been around for a long time in terms of the style of the restaurant,” he said. “A lot of the concepts pre-dated both our restaurants. … There’s frankly no protection in the word ‘Texas.’”

But in its suit, Texas Roadhouse alleges the similarities are more than coincidental and infringe on its incontestable registered intellectual property, as well as the more esoteric area of trade dress. Its logo, for instance, incorporates an outline of the state of Texas crowned with a stylized cowboy hat. A remarkably similar design appears on Texas Corral signs.

Texas Roadhouse also claims, among other things, that Texas Corral impermissibly copied its building design and its trade dress. Doster said Texas Roadhouse, which dates to 1993, is the only restaurant in its category that doesn’t advertise nationally, making its distinctive building design and trade dress critical to how consumers identify the brand.

Fardy called Magistrate Judge Paul R. Cherry’s rulings on discovery issues unfortunate and said they didn’t reflect the current status of discovery in the case. Cherry ordered a deposition of Switzer and discovery responses from him, but denied for now Texas Roadhouse’s demand for production of financial documents from all Texas Corral defendants.

Cherry also ordered Texas Corral to pay two-thirds of the costs and fees associated with Texas Roadhouse bringing the motion to compel. The calculation in part, Cherry wrote, was based on Texas Roadhouse’s relative degree of success in the litigation.

“We think our case is a strong one,” Eidson said. “Texas Roadhouse wants to protect its brand, and we’d like to have consumers not be confused anymore.”

Valparaiso University Law School professor Curt Cichowski presented the Texas Roadhouse case to an intellectual property class and said the response of students was telling. “Most of them were familiar with the restaurants, and most expressed confusion about the relationship between the two,” he said. Students asked if the restaurants are owned and operated by the same company.

Cichowski said that’s probably a problem for Texas Corral. “All Texas Roadhouse has to do is convince the court that Texas Coral is, because of their chosen trademarks and trade dress, causing consumers to ‘likely’ be confused as to which restaurant is which. Actual confusion is not necessary, just the likelihood of such confusion.”

But Cichowski said Texas Corral may have a case if it can prove it was in business before Texas Roadhouse’s marks were registered and had no prior knowledge of the chain. In such a case, he said a court could allow Texas Corral to continue operating as it has, but not expand.

A likelier outcome, he said, is a court could order Texas Corral locations to change the look and feel of their restaurants and potentially rebrand to avoid confusion.

“The commonality of look and feel is extensive, and the respective locations … are in high-traffic areas that will continue to cause consumers to come into likely confusing contact with each restaurant,” he said.

Fardy, though, said Texas Corral has some pending discovery motions before the court that he believes could turn the tide of the case. Among them, Texas Corral has moved to bifurcate a coming trial into a first phase for liability and a second phase for potential damages.

“We hope to win the case, and our client feels very strongly about this,” he said, noting Switzer and his family put more than 20 years of work into building the chain. “We’re just trying to get the best outcome for our client.”•