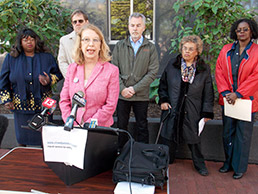 The suit takes aim at the system in which one of the three unelected members of the Marion County Election Board, most recently Republican Party member Maura Hoff, has vetoed multiple early voting locations in the state’s most populous county. The result has been sometimes-long lines at the sole location for early voting, the Marion County Clerk’s office in the Indianapolis City-County Building.

“Since 2010, partisan politics has meant less access to early voting in Marion County than in other counties across the state,” Common Cause policy director Julia Vaughn said. Vaughn and other plaintiffs spoke at a news conference outside the City-County Building in downtown Indianapolis Tuesday announcing the suit.

“The Indiana NAACP is proud to stand here today to announce this challenge because this statute is harming all voters in Marion County but having a particularly pernicious effect on voters of color,” said Indiana NAACP President Barbara Bolling-Williams. “It’s shameful that the largest county in our state only has one early voting site.” She noted her home county of Lake, the state’s second-most populous, had eight satellite voting locations in 2016, and 22.5 percent of voters there cast early in-person ballots.

“What we’re dealing with here is both a fundamental constitutional right to vote as well as a statutory right to participate in the early voting exercise on the same terms that are available to voters in counties other than Marion County, where we’ve consistently been restricted to one location, even though we’re by far the largest in population,” said lead plaintiff’s attorney Bill Groth.

Groth filed the complaint that’s before Senior Judge Sarah Evans Barker in the U.S. District Court for the Southern District of Indiana. The suit alleges 14th Amendment equal protection and due process violations, violations of the Voting Rights Act, and a violation of the Indiana Constitution’s provision under Article 2, Section 1 that “elections shall be free and equal.”

“We can see reflected in the number of people who turn out for early voting that since the satellite locations were eliminated, the raw number and the percentage have both gone down, whereas in other counites that have accessible voting, the percentage of people who vote early has gone way up,” Groth said.

Plaintiffs at the news conference Tuesday highlighted the lack of parking and unequal access to the City-County Building, particularly for Indianapolis residents who live far from downtown.

Indianapolis-Marion County NAACP President Chrystal Ratcliffe said the statistics bear out greater numbers of people vote when more early voting sites are made available. “We need to become stronger in the community to make sure that happens,” Ratcliffe said. “We can no longer disenfranchise anyone to vote.”

Plaintiffs Doris McDougal and John Windle shared their concerns about the lack of equal access to early voting. McDougal said it’s important to her to vote in person, and Marion County’s lack of early voting sites causes long lines not just during early voting, but on Election Day as well. “Marion County voters have been negatively impacted by this situation for too long and it is time to end it,” she said.

Windle credited reading a Matthew Tully column in the Indianapolis Star about the lack of satellite voting and feeling something needed to be done. He contacted Common Cause via social media and agreed to participate in the legal challenge. He said when he learned “an unelected, unaccountable member of an election board is given a veto over the establishment of early voting sites against the wishes of the majority of the board, I was pretty upset.”

The suit anticipates the Marion County election board “will next consider a resolution to establish satellite sites for early, in-person absentee voting in early 2018, prior to the 2018 federal off-year elections, and based on recent history that such resolution will be defeated by the opposition of Defendant Hoff or her Republican-appointed successor, despite such resolution being supported by the MCEB’s other two members.”

“We think our argument absolutely makes the case that voters in this county have a bigger burden in terms of accessing early voting. Those are the facts, and we believe this law needed to be challenged, and we’ll see what the court says,” Vaughn said.