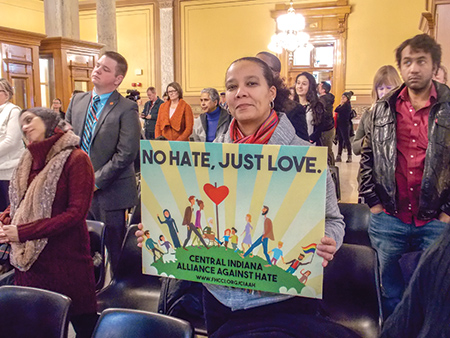 Fourteen days after rallying on the third floor of the Indiana Statehouse to cheer, applaud and push the Legislature into passing a hate crime bill this session, advocates were stunned the measure failed last week to even get a committee vote.

Senate Bill 418, authored by LaGrange Republican Susan Glick, would have allowed judges to consider bias motivation as an aggravating factor when sentencing an offender. Individuals who targeted victims because of their race, religion, gender or other characteristics could have faced longer terms in prison.

Since the 2016 session of the Indiana General Assembly when she co-authored a bias motivated crimes bill with now-retired Sen. Earline Rogers, D-Gary, Glick introduced much the same legislation in 2017 and in 2018. But each year it has struggled to advance and, in fact, has stalled earlier in the legislative process each subsequent session.

The 2016 proposal was approved by the full Senate on a 34-16 vote, but the 2017 measure was pulled from the upper chamber after an amendment split the Republican caucus. Reaching consensus was difficult again this year, so despite giving the hate crimes bill a hearing, the Senate Committee on Corrections and Criminal Law did not vote on it.

Senate President Pro Tempore David Long attributed the bill’s backward momentum to the issue becoming more political and more groups speaking out. At a Jan. 30 press conference immediately after the adjournment of the Corrections and Criminal Law Committee, he noted different groups are “agitating for different things and different recognitions and protections” which hindered the Republican caucus from finding common ground on the legislation.

“I think the public awareness of it, the acceptance of it from the public is coming and I think that tends to drive the Legislature in that direction and I think that’s what’s going to happen with this issue,” said Long, R-Fort Wayne. “But we still have differences of opinion, so that’s where we are right now.”

Reaction to the bill’s failure ranged from shock to disappointment and anger. Marion County Prosecutor Terry Curry warned hate crimes will continue in Indiana, and Rep. Cherrish Pryor, chair of the Indiana Black Legislative Caucus, wondered how many more people would be harmed.

“The Senate has made it clear that it does not matter if a person is harmed because their attackers were upset that they had a different race, color, creed, disability, national origin, religion, sexual orientation, gender or gender identity,” Pryor, D-Indianapolis, said in a statement. “They will not get the justice they deserve because some in the Senate cannot face their responsibility to protect all Hoosiers.”

However, opponents of Glick’s bill said it provided extra protections only for certain individuals and excluded everyone else. Indiana Attorney General Curtis Hill joined the opposition.

Parvonay Stover, legislative affairs director for the Attorney General’s office, told the Corrections and Criminal Law Committee the legislation was unnecessary and would not deter crime. Rather, she said, crimes perpetrated because of the victim’s traits can already be prosecuted, and judges have the tools they need to sentence offenders.

“We believe at the Attorney General’s Office that the appropriate action is to punish the act itself and not attempt to police thoughts or perceived motives,” Stover said.

Hill submitted new language for SB 418. Glick described the proposal as stripping the bill and inserting enhancement provisions, and Sen. Michael Young, chair of the Corrections and Criminal Law Committee, said the Republican caucus did not want to go “down the road of enhancements.” Neither Long nor the Attorney General’s office provided a copy of that proposal.

Long and Young, R-Indianapolis, emphasized during the press conference that Indiana judges have the power to consider the motivation of the defendant when imposing a sentence. They pointed to Witmer v. State, 800 N.E.2d 571 (Ind. 2003) where the Indiana Supreme Court held the characteristics of the victim can support an enhanced sentence. Also, subsection (c) of Indiana’s sentencing law, I.C. 35-28-1-7.1, provides that the courts are not limited on what they may consider at sentencing.

The Indiana Public Defender Council has no official position on the hate crime bill, but executive director Larry Landis agreed judges do have the authority, now, to consider bias motivations. But whether the judges are using hate as an aggravator is difficult to determine because typically they do not have to list their reasons when imposing a sentence.

Landis maintained the impact of such legislation on the criminal justice system would be minimal and probably not deter acts of hate. This bill, he said, is a policy statement that some people want to show Indiana does not tolerate hate and bigotry.

Sen. Lonnie Randolph, D-East Chicago, advocated for stronger provisions. Namely, he said the bill should enable judges to incarcerate for a hate crime above and beyond the sentencing cap contained in the criminal code.

“My suggestion, if, in fact, the committee wants to seriously consider a hate crime, they should enhance the maximum penalty for that respective case above and beyond what the statute requires,” Randolph said at the committee hearing.

A continued hurdle for reaching consensus is the list of characteristics included in the bill. The courts would be able to hand down a stiffer sentence if the victim was chosen because of a trait such as gender identity or sexual orientation. Apparently, the list split the Senate Republican caucus with some wanting to keep it as is, others wanting to expand it, and still others wanting to toss it altogether.

David Sklar, director of government affairs for the Indianapolis Jewish Community Relations Council, said the supporters worked with Glick to write an amendment that would have added generic language about beliefs and affiliations to the list of characteristics. Glick declined to make the amendment available.

The Central Indiana Alliance Against Hate, a coalition of community groups supporting the bill, saw this as a compromise, but when it was rejected, Sklar came to believe the opposition had a deeper issue with the legislation. To him, the problem some had with the bill was not that it covered too few, but that it covered the LGBT community.

Sklar said the supporters are drawing a red line that any hate crime law must include a list of characteristics to be effective. To bolster his point, he nodded to the Georgia hate crime statute that was declared “unconstitutionally vague” in 2004 by the Georgia Supreme Court because the language was too broad. The decision was rendered in two consolidated cases, Botts v. The State and Pisciotta v. The State.

Long said he expects the General Assembly will revisit the issue. However, Sen. Greg Taylor, D-Indianapolis who has authored his own hate crime bills for the past four years, was skeptical, indicating Republicans made a similar promise to him in 2017.

“I was told on the Senate floor last year that a bipartisan effort would be made to ensure a bias crimes law would be passed this legislative session,” Taylor said. “Those conversations ended when the session began.”•