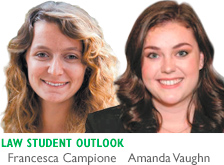 As 1Ls at IU Maurer School of Law, we are surrounded by individuals with different income levels, political beliefs, religions and educational interests, but we all unite with the hopes of better understanding the law. However, our diverse backgrounds lead to exhaustive, sometimes tense, conversations about what is going on in the world. With this column, we hope to provide a peek into law students today and how their opinions now could shape the profession in the future.

Since October, when the news broke of sexual misconduct allegations against film producer Harvey Weinstein, more than 40 prominent men have joined him in infamy. Some of the most shocking accusations stunned the public as trusted household names such as Matt Lauer, Aziz Ansari and Ben Affleck were added to the seemingly never-ending list of men whose characters and actions were suddenly questioned, dissected and analyzed. As the Time’s Up movement rolled its way onto the red carpet at the Golden Globes earlier this year, the push against sexual misconduct gained unstoppable momentum. We want to take a moment to analyze this cultural crusade and its implications for the future of classrooms, offices and personal interactions, as law students with budding hopes for our futures as ethical and powerful attorneys.

Sexual misconduct is an issue that expands beyond a bad date and can impact a person’s livelihood when it comes into the workplace. It is not an issue that exclusively harms women; it does not discriminate based on race, gender, sexual orientation, religion, relationship status, income level or job position.

As two young women preparing to enter an industry that is only 36 percent female, and with more than 80 percent of leadership positions held by men, according to the American Bar Association, gender inequality, which can lead to sexual misconduct, is rampant. Our hopes, which we believe to be echoed by many in our generation, is that in our careers, we can make a change in work culture, making it a safer and happier place for everyone.

As journalism students in our respective undergraduate programs, we tuned into NBC faithfully each morning to watch Matt Lauer deliver the news beside Savannah Guthrie, a journalist and lawyer and personal hero of ours. They seemed like an unstoppable pinnacle of integrity and quality journalism. And then one day he was gone. Guthrie delivered the solemn words from the teleprompter informing the world of yet another instance of sexual misconduct in the workplace, and just like that another name was added to the list.

One of the most common responses we have seen from current law students is a zero-tolerance policy for instances of sexual misconduct. As the culture has changed in the last few months nationwide about the topic, it has invaded the law school, so far as being part of a few exam fact patterns.

After taking criminal law last semester, many students have discussed how the current attitude of “guilty until proven innocent” is at odds with what we have spent all semester learning is so important in the legal system, “innocent until proven guilty.” With only one semester under our belts, we do not feel qualified to propose policy, because we’re unsure how to reconcile this cultural trend with the justice system to provide closure to victims, but also a fair trial to the accused.

While it might not be the popular view on the subject, as legal professionals, even those of us who are still in law school, we have a special understanding of rights of the accused. There are certainly valid claims that require immediate action to ensure a safe workplace, but trial by fire in the public eye is not always the proper accompaniment to such. We have learned from countless professors that valid claims deserve their day in court, but we’ve also learned that fairness is essential to the American legal system, and the accused also deserve to be heard.

As future professionals, we appreciate the conversation that developed over the last few months. The intolerance of what used to be considered acceptable behavior is a positive change, and we believe our generation will embrace the ideals of a safe workplace. We realize that change will not happen overnight as it is something that takes the time and efforts of many people with strong beliefs, good intentions and innovative ideas. This passage of time is not necessarily a detriment. Our legal system prides itself on slowly exploring all sides of the story to allow the truth to be heard and justice to be served. A fast solution to this behavior would be a disservice to the future, as it will fail to allow legislators to set forth a quality response.•

• Francesca Campione and Amanda Vaughn are first-year law students at Indiana University Maurer School of Law. The opinions expressed are those of the authors.