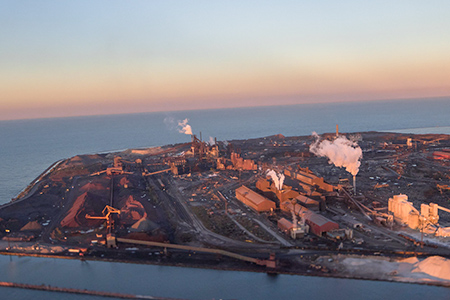 The consent decree reached between the state of Indiana, the federal government and the metallurgical coke manufacturers in East Chicago is 69 pages of terms and conditions detailed in dense legal and scientific language.

It was announced in January and spotlights another environmental headache in the northwest Indiana city. For years, according to a complaint filed in federal court, Cokenergy, LLC, and Indiana Harbor Coke Co., a subsidiary of SunCoke Energy, Inc., violated the Clean Air Act by exceeding the limits on emissions of lead, sulfur dioxide, particulate matter and other pollutants.

The consent decree lists the actions the companies must take to comply and maintain compliance with air quality standards. It also requires the companies to submit progress reports and outlines the penalties for not meeting the terms of the agreement. The court still must approve the settlement and consent decree.

For years the parties negotiated, and when the settlement was reached, Indiana Attorney General Curtis Hill’s Office called it “fair, reasonable, and in the public interest.”

East Chicago resident Thomas Frank is more plainspoken about what the companies should be required to do.

The artist and activist knows well the contamination and pollution that plagues his community. He can talk at length about hazardous spills and messes that happened in the past, and he acknowledges the steel mills and factories created jobs that gave residents economic stability.

From that background comes Frank’s requirement for the coke facilities — “fix it or shut it down.”

The East Chicago coke-making facilities manufacture their product through a process that includes ovens heated to about 2,000 degrees and waste gases routed to heat recovery steam generators that cools the emissions enough to go through the pollution control equipment. Since 2005, the complaint noted, the facilities illegally spewed toxins.

Frank and his East Chicago neighbors were long exposed to pollutants that can cause cancer, respiratory illness, cardiovascular conditions as well as behavioral and learning problems. And when the consent decree was unveiled, they had 30 days to comment. They could share their ideas, concerns and recommendations for changes, but how much impact their demands had is uncertain.

Samuel Henderson, staff attorney for the Hoosier Environmental Council, said the consent decree can be beneficial. The regulators and the private companies craft an agreement that can clean up a hazardous mess, but he says the people living in harm’s way are left out of the discussion.

Even the public comment period does not give the residents a meaningful voice, he said. They do have the option of going to court and trying to convince a judge to set aside the decree, but community members have limited opportunity to shape the process.

Notre Dame Law School professor John Nagle believes the public can foster changes to a consent decree. The comments, he wrote in an email, indicate how well the agreement represents the concerns of “those who are really affected.” There have been “numerous instances,” where the public response has caused judges to reject the decree or the government to scrap it.

The U.S. Environmental Protection Agency discovered the companies’ violations in 2008 after reviewing information it had requested from the coke facilities. According to the complaint, on thousands of occasions going back as far as 2005, high levels of toxic fumes escaped from the oven doors or poured from the smokestacks in violation of the emissions standards.

Even so, the Indiana Department of Environmental Management issued Title V Operating Permits to one or both companies in 2006, 2011, 2014 and 2016. The agency defended the permit renewals, saying it was limited in how it could respond.

“Title V operating permits cannot be denied on the basis of Notices of Violations alone because the violations are considered ‘alleged’ until proven,” IDEM said in a statement.

However, in written comments asking that IHCC’s renewal application be turned down, the Southeast Environmental Task Force pointed to the company’s own compliance reports filed with IDEM. SETF’s attorney Keith Harley submitted the comments and gave testimony during a public hearing on the air permits in November 2017. Harley is a staff attorney with the Chicago Legal Clinic, Inc.

He highlighted hundreds of days in 2017 where the toxins released from the facility exceeded the limits. These deviations, he wrote, were “frequent and significant.”

For example, IHCC is required to keep the oven uptake dampers in a minimum position to maximize draft. Yet, over a six-month period last year, the company noted there were 667 individual incidents where the dampers were improperly positioned and only 14 days during which deviations did not occur.

In addition, Harley noted, IHCC repeatedly said it was in the process of completing maintenance, repair and remediation. But it did not disclose the extent of the cleanup or provide any timetable for compliance.

Concerns about the decree

Harley said IDEM had asserted the consent decree, which was still being negotiated, would address the compliance issues and those requirements would be included in IHCC’s permit.

In November, Harley was skeptical an agreement would be reached. Again, he referenced public documents that IHCC’s parent, SunCoke, had filed with the U.S. Securities and Exchange Commission. As late as September and October of 2017, the corporation told investors the negotiations might not reach a settlement and that instead of rebuilding 57 ovens, it was taking a “wait-and-see” approach.

The parties did agree on a resolution and IDEM Commissioner Bruno Pigott said it would improve the “quality of life for Hoosiers living in East Chicago.” Included were compliance provisions for rebuilding or idling ovens, minimizing leaks from non-rebuilt ovens, limiting emissions from the bypass vent stacks, and submitting for review preventive maintenance and operation plans.

Moreover, the defendants are being fined $5 million. Cokenergy will be required to spend another $250,000 to reduce the lead hazards in schools, daycare centers and other places with young children and pregnant women.

Attorney General Hill said the civil penalty is not the only monetary outlay the companies will have to make. The manufacturers have already spent about $35 million, he said, and will have to spend millions more bringing the plants into compliance.

With consent decrees, Nagle said, the government and the company have typically concluded their chances of either winning or getting a better result in court are too uncertain, so they are better off settling.

But the decree is judicially enforceable, he continued. If the company violates the agreement, the government can go to court to seek relief.

Henderson, though, questioned whether IDEM would enforce the settlement. He noted the length of violations seem to indicate there is “almost no limit to what the state government is willing to turn a blind eye to.”

He has concerns the decree’s compliance schedule is not aggressive enough and its enforcement mechanisms are inadequate. As for the fine, it does not do enough to deter future bad acts. The money the company is spending on rebuilding the ovens would been spent anyway to meet the requirements of the permit.

In the end, Henderson said the best solution was to meet the demands of the community — “fix it or shut it down.”•