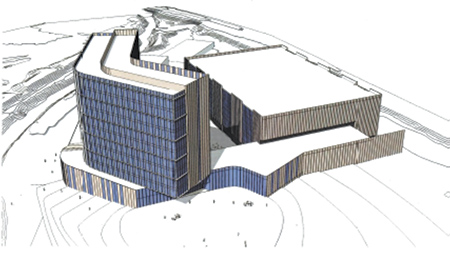 Efficiency and flexibility: those two concepts underlie the blueprint of what eventually will become the new Marion County Criminal Justice Center.

Right now, the former Citizens Gas and Coke Utility plant in the Twin Aire neighborhood is little more than piles of dirt. But when construction on the multi-functional campus is completed – likely sometime in 2022 — the complex will be designed to serve the judicial needs of Indianapolis residents in the most effective way possible.

For Marion County courts, that means a new operational model that ends the tradition of court specialization. For the Sheriff’s Office, it means utilizing modern technologies to improve inmate services and keep costs down. And for the city as a whole, it means taking a collaborative approach to cutting down on crime. 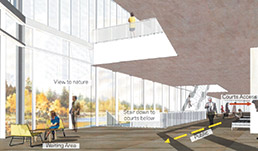 The interior of the Marion County Courthouse will include 11 floors of courtrooms and chambers.

“Criminal justice reform ideas are driving the design work the courts have done and the jail and sheriff are doing,” Indianapolis corporation counsel Andy Mallon said.

In the name of criminal justice reform and court efficiency, the judges of the Marion County courts recently voted to end their longstanding practice of operating in “silos,” or highly specialized courts. Right now, there are 14 silos, ranging from major felonies to paternity actions to initial hearings and beyond, but a recent vote by the courts’ general term will whittle that number down to three: family court, civil court and criminal court.

The exterior will include space for public art and engagement.

The creation of the new family court division will encapsulate cases such as guardianships, termination of parental rights, children in need of services and the like. That means cases that might normally be sent to the civil division, such as a divorce involving children, will be pulled into the family court docket.

The shift to a three-division court structure will be a dramatic change for the Marion County judiciary, which has a long tradition of operating under the silo model. Superior court judges acknowledged as much during last month’s judicial retention interviews, when the topic of the new criminal justice campus frequently came up.

Most of the judges seeking retention conceded that though the shift away from court specialization would pose a steep learning curve, it was a necessary change to ensure that litigants receive just outcomes and judges are well-versed in all areas of the law. Similarly, Judge Tim Oakes, chair of the Marion Superior Court Executive Committee, said the three-division operational model received a strong show of support.

“It was approved nearly unanimously at general term, and at executive committee the vote was unanimous,” Oakes said.

In an email to the Indiana Lawyer, Indianapolis Bar Association president James Bell wrote that in the past, external factors such as the opioid and financial crises unexpectedly caused some judges to see sharp increases in their dockets. But under the new operational model, he said it appears the court system will be better equipped to adapt to unforeseen circumstances.

“The IndyBar supports any effort to support the administration of justice,” Bell wrote in a statement on behalf of the bar. “… It is our understanding that the new system will allow the courts more flexibility to absorb any future change and better serve the public.”

Another issue frequently addressed during the judicial retention interviews was difficulty in finding available space to hold hearings in the current courthouse, the City-County Building. Multiple judges complained of struggling to find an available courtroom to hold jury trials, and some even told of having to postpone trials until a courtroom became available.

But the current design scheme for the new courthouse calls for a “co-located” layout intended to free up courtrooms and increase court collaboration. Unlike the currently isolated judicial chambers, all chambers will be located on the top floors of the new courthouse, with immediate court staff members located near the judges’ offices.

“What it would do is create a much more collegial environment so that they can share thoughts and ideas on the issues that they all run into every day,” Mallon said. “By being geographically located next to each other, they can spend time with their comrades.”

The lower floors of the 11-story building would be designated for hearings and courtrooms, but the model of one judge commanding one courtroom will no longer exist. Instead, Mallon said the disassociation of judicial chambers from a specific courtroom will allow for more flexibility.

While some judges may currently preside in courtrooms that are equipped with jury boxes, they may not hear a jury trial every day, which means they may have to share their courtroom with a judge who is hearing a trial. But with the new design, judges will only utilize the courtrooms that fit the specific cases they are hearing that day, eliminating such logistical concerns, Mallon said.

Across the street from the City-County Building in the Marion County Sheriff’s Office, jail staffers often find themselves facing similar scheduling conflicts. The main jail has only a handful of programming rooms, which means it can be a challenge to find an available room where program providers can work with inmates, Lt. Colonel James Martin said.

But design plans for the new jail include 40,000 to 50,000 square feet of space for inmate educational, job training, counseling and other similar programs. Further, each housing unit will have an attached program room that will be equipped to host technology-based programming, Martin said. That means inmates from multiple housing units will be able to tune into “webinars” without going through the process of being transported from their unit.

Similarly, judicial video conferencing will be a key feature of the new jail, Sheriff John Layton said. The current system requires transporting inmates from the jail to the City-County Building for even minor hearings, Layton said, which requires enough manpower to lead inmates from one building to the next. But with jail-to-court video conferencing, an offender’s case can be adjudicated more easily and efficiently with transportation and scheduling issues removed.

“It’s the technology that’s going to run this new detention center,” Layton said. “To be able to keep the numbers down — the numbers of inmates — and while they are in there, have some kind of quality time as far as programs and things to help them when they do eventually get out of jail … it’s going to be the technology.”

The Indianapolis City-County Council approved $55 million in construction funding for the new criminal justice center in January, and since then the city has been working on facilities procurement through the design-build model.

The first step in that model — requests for qualifications, or RFQs — is already complete, and the next step, requests for proposals, will likely begin in May, Mallon said.

From there, Mallon said the city hopes to have made its selections among the RFPs by the summer, then finalize contracts in the fall. The city may decide to award one contract for the courthouse and another for the sheriff’s office and jail, he said.

The third component of the campus, an assessment and intervention center, will be procured through the traditional bidding process also expected to wrap up by the fall.

Meanwhile, plans are in place to break ground and begin earthwork in late April or early May, with a goal of beginning work in June.•