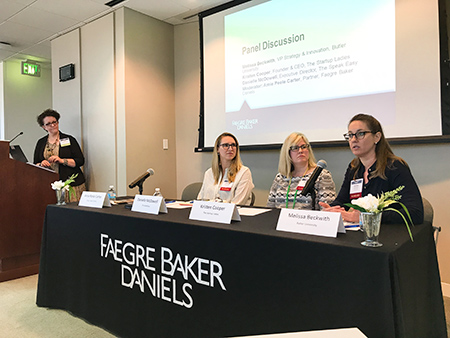 As a law clerk for Judge Richard Linn of the U.S. Federal Circuit Court of Appeals, Phil Poirier got to attend meetings of the Giles S. Rich American Inn of Court, where he could mingle with intellectual property attorneys and members of the judiciary.

It was an experience that not only stayed with him but also planted an idea. Last fall, Poirier, a patent attorney at Dow AgroSciences in Indianapolis, decided the time was right so he reached out to Linn, telling his former boss he wanted to start an IP Inn of Court in Indiana.

“I knew the moment I spoke about it (to Judge Linn), it was going to happen,” Poirier said.

The organization committee is sending a limited number of invitations to potential members and it is finishing the application for a charter from the American Inns of Court.

An inaugural meeting is being planned for September.

The Inns of Court are select organizations that are focused on building collegiality and improving the practice of law. Linn is a strong advocate for the Inns, saying the groups foster civility, ethical behavior and underscore the ideal of practicing law in a professional and courteous manner.

“I have yet to find a single downside,” Linn, now a senior judge, said of the Inns of Court. “I do see many upsides, so many positives to it in terms of learning.”

After doing a little research on the local IP bar and talking to his colleagues who had transitioned to some of the Indianapolis law firms, Poirier concluded the “critical mass” was available in the city to start an IP-focused inn. He sees Indianapolis as having a broad base of legal expertise in patents, trademarks and copyrights as opposed to members of the Rich Inn, who were primarily patent attorneys.

The new Inn, Poirier said, will give the members of the IP community a chance to interact. Senior practitioners, young attorneys and judges will have the opportunity to build relationships and learn together.

Mark Janis, director of the Center for Intellectual Property Research at Indiana University Maurer School of Law, is a part of the Indianapolis Inn organizing committee. He said the mission of the Inn, especially its focus on mentoring, aligns well with the goals of the Center.

“The Inn, like the Center, seeks to host high-quality substantive discussion on IP Issues of national and international significance,” Janis said. “Also, the Inn focuses on individualized mentoring of junior lawyers, which has historically been crucial in the legal profession.”

Amie Peele Carter, IP and sports law attorney at Faegre Baker Daniels LLP, echoed others when she said Indianapolis has a strong collection of intellectual property attorneys and many resources to serve the innovation community. But the pressure of practicing law coupled with the demands of a family often prevent attorneys from developing friendships or even just getting to know their colleagues in the IP bar.

Recently, a luncheon hosted by Faegre as part of the 2018 World IP Day highlighted the vibrancy of the inventors and startup companies operating in the Indianapolis area. About 40 participants gathered to hear a panel discussion about tapping into the entrepreneurship ecosystem.

Peele Carter, who has been invited to join the Indianapolis IP Inn, said the Inn will strength the IP bar which will, in turn, benefit local innovators. She said she is looking forward to sharing ideas with attorneys working for law firms and corporations as well as judges and academics.

The Indianapolis IP Inn is part the Linn Inn Alliance, which is working to start 30 new IP-focused Inns of Court by 2020. Like Poirier’s request, a former mentee of Linn’s asked the judge to help her start an IP Inn in Chicago in 2006. The enthusiasm that greeted what is the Richard Linn American Inn of Court helped launch the Alliance.

Learning is a key to the Inns, Linn said. Attorneys of varying levels of experience are mixed together in pupilage groups, and each group is responsible for making a presentation on a particular legal topic at one of the meetings held each month during the fall, winter and spring. Through meeting and working on the project, the younger attorneys will learn a great deal from the more experienced lawyers, Linn said.

After each presentation, Linn said the members will have dinner together. While they are breaking bread, the conversation will continue which will foster more learning and strengthen relationships.

The activities of the Inns, Linn maintained, is different from a traditional bar association. In his view, a bar association event can involve hundreds of attorneys who have little chance to interact other than to exchange niceties. And the continuing legal education programming, he continued, usually resembles a dry law school lecture that leaves many bored and uninterested.

At the Inns of Court, the chance for young lawyers in the Inn to be mentored by senior attorneys is a “magical thing,” Linn said.

Don Knebel, of counsel (retired) at Barnes & Thornburg LLP, said he wants the Indianapolis IP Inn to collaborate with the bar associations and other legal organizations. As the newly elected president of the local IP Inn, he does not want the organization to be in competition with other groups.

Still, Knebel said there is room in the local legal community for an IP Inn of Court. He concurred Indianapolis has become an important center for IP lawyers, and he said the new Inn will provide a “wonderful opportunity” for lawyers and judges to get together.

Certainly, Poirier wants that to happen. Much work has yet to be done, but he hopes by June of 2019, the Indianapolis IP Inn members will say the result was worth the effort.•