Home » Amid uncertain future, Valpo Class of 2018 told to be ‘be noble in your pursuits’ 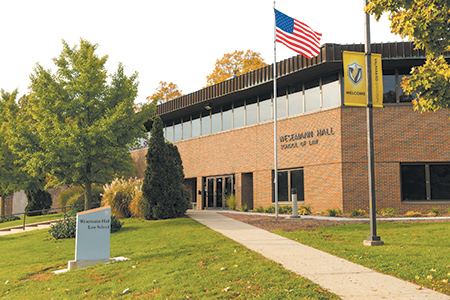 With Valparaiso University Law School facing an uncertain future, law professor Jeremy Telman used his remarks during the May 20 graduation ceremony to underscore the institution’s 138-year impact on the legal profession, as well as to hint at the void that would be created if the law school ceases to exist.

“This place has a proud history,” Telman said. “You, graduates, will help advance that history with your own careers. You should do so with the time, the dedication, the intelligence, the wit, the creativity and the resourcefulness that my colleagues past and present have shared with you.”

The May graduation came about six months after the law school announced it was suspending admissions for the fall of 2018 and looking for a way to remain open. It also marked the last ceremony for law school dean Andrea Lyon, who will resign as dean on June 1.

As members of the Valpo Law Class of 2018 gathered for graduation at the university’s Chapel of the Resurrection, no one wanted to speak about what might come next. University officials emphasized to the media that the conferring of degrees was a celebratory event and asked that students not be interviewed.

Afterward, Lyon said she was not going to answer any questions about the law school’s future because graduation was a joyous occasion. She did confirm she will be remaining with the university when she leaves the dean’s office.

At the close of the graduation ceremony, Valparaiso University president Mark Heckler publicly thanked Lyon for her service as dean. He told her she had modeled for the students what it means to pursue the law as a calling.

The Class of 2018 was the smallest to graduate from Valparaiso Law School in recent years. Eighty-three received juris doctor degrees and one earned a master of laws degree.

Indiana Court of Appeals Chief Judge Nancy Vaidik, a 1977 graduate of Valparaiso University and a 1980 graduate of Valparaiso Law School, was recognized for her accomplishments with an honorary doctor of laws degree during the ceremony. Also, professor Rebecca Huss was presented with the Jack A. Hiller Award, which recognizes excellence in teaching and scholarship.

The graduation opened with graduates and faculty proceeding down the center aisle of the chapel, amid the applause of family and friends. Much of the morning’s weather was overcast and drizzling, but shortly before commencement began, the sun peeked out and illuminated the interior of the church.

Heckler congratulated the 2018 law graduates, saying their achievements came through their diligence, perseverance and hard work. Later in the ceremony, as each class member was called to the platform at the front of the chapel to receive their degrees, Heckler shook their hands and Lyon wrapped each one in a hug.

Preluding Telman’s remarks, Matchinski noted the history of the law school and that Valparaiso-educated lawyers have been successful in government, education, politics, private practice, the judiciary, corporate executive offices and nonprofits.

“You will be standing on the shoulders of giants,” Matchinski told the graduates. “Be noble in your pursuits.”

She also thanked Lyon for her “tenacious and passionate leadership” during her time as dean.

“It has been a difficult time for Valpo Law School and legal education across the country,” Matchinski said. “I have watched dean Lyon work tirelessly on behalf of the law school’s students, faculty, staff and alumni.”

Telman, who received his J.D. from New York University School of Law, has taught at Valparaiso Law School since 2004, focusing his classroom work on contracts and international law.

He opened his remarks by recalling the many law professors who had come before him, including those who retired in 2016 in what he described as a “selfless act” to help the law school’s finances. He also noted some of those who retired still return to teach, for little or no money, because they are committed to scholarship and the community.

In February 2016, the law school announced it was going to have to reduce its faculty because of declining enrollment. Ultimately, 13 faculty and seven staff members left.

Telman highlighted the U.S. Supreme Court justices who have visited and taught at the law school, and he pointed to the Valparaiso University Law Review, which has published articles from some of the best legal scholars. But he focused most on the law school’s experiential education program.

Valparaiso Law School was requiring its students to do pro bono work before the American Bar Association instituted a similar mandate for all law students, Telman said. Also, the institution was among the first in the country to open clinics in the 1970s to help the indigent in the local community. These clinics have provided tax assistance and mediation services, as well as representation to domestic violence victims, juveniles, immigrants and individuals involved in civil disputes or charged with criminal acts.

Telman noted that at times, the law school has struggled to explain how it, as a secular institution, fits with the university’s overall religious mission. Then he pointed to the students’ work to provide assistance to the underprivileged.

“Without the law clinics and the students trained to lead and serve in them, who’s going to handle all the additional problems that will arise when there is no one representing the indigent?” Telman said.

He said northwest Indiana could feel the loss if the clinics close. And he told the graduates to fill the gap by continuing to represent the underrepresented.

“It should now be clear the university has effectively promoted its Lutheran mission by supporting this secular law school,” Telman said to the Class of 2018. “You are all a part of the fulfillment of that mission whether you view the calling as a religious calling, as a social calling, as a professional calling, or as a way to do well by doing good.”•