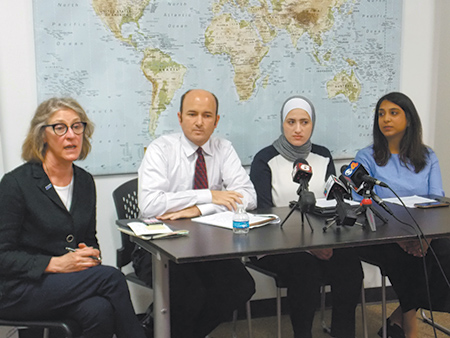 With the U.S. Supreme Court upholding President Donald Trump’s travel ban, the ACLU of Indiana said the fight to overturn the executive order that prohibits certain immigrants from entering the United States must now move from the courtroom to the grassroots.

Jane Henegar, executive director of the American Civil Liberties Union of Indiana, encouraged members of the public to tell their congressional delegation and other elected officials that they do not agree with the Supreme Court’s decision. She pointed out the travel ban upheld by the Supreme Court was the third iteration of an order which was previously broader and “more blatantly discriminatory.” But through the public outcry and the courts, the administration retrenched.

“It’s only by pushing back, by letting people know … that if (the President) acts either rhetorically or in an action contrary to our Constitution, then we’ll act,” Henegar said. “All we have in the war of words is higher, better words and those thankfully are the words that govern our country in the Constitution.”

Henegar spoke June 27 at a press conference in Indianapolis a day after the Supreme Court issued its 5-4 decision in Trump v. Hawaii. She was joined by Gavin Rose, senior staff attorney at the ACLU of Indiana, Sara Hindi, community engagement coordinator at Exodus Refugee Immigration Inc., and Aliya Amin, executive director of The Muslim Alliance of Indiana.

Although the ruling overturned a preliminary injunction that prevented the government from enforcing the ban while the litigation continued, Rose sees little hope for a challengers’ victory in court. The majority ruled presidents have discretion over immigration and foreign affairs and was convinced by the Trump administration’s assertion that there was a nondiscriminatory reason for the ban.

Lower courts that ruled against the travel bans and Justice Sonia Sotomayor, in her dissent, pointed to Trump tweets and statements as evidence that his true intent was not to keep the country safe and secure but to specifically prohibit Muslims from settling in America. The other courts’ action of looking to the president’s campaign speeches and social media postings when making their rulings raised some eyebrows, but Rose does not believe the majority opinion bars such examination in future disputes.

“I don’t think it stands for the proposition that the President can never be held to account for what he says,” Rose said. “There are any number of other issues where he takes to (Twitter) first and I don’t think anything in the Court’s decision says that’s going to be ignored on other issues.”

Hindi and Amin said refugees who have been resettled in Indianapolis have been welcomed into the community and are becoming self-sufficient. However, Amin said reports about acts of hate have been increasing, which correlate to the anti-immigrant rhetoric coming from the White House.

In addition to its words, the Trump administration also has been closing America’s borders. Hindi said the number of refugees allowed into the United States has been capped at 45,000 for fiscal year 2018 which ends Sept. 30, 2018. Not only is that the lowest cap in history, but the actual number of refugees accepted will probably be considerably lower, since only 20,000 are expected to be welcomed.

“People do not choose to become refugees, but the United States can choose to welcome them,” Hindi said. “Instead during the largest refugee crisis in global history with over 68.5 million displaced people, the United States has chosen to shut its doors on the most vulnerable population.”

The administration’s actions have split families and created uncertainty among refugees in Indiana, Hindi said. Some had their flights to the United States cancelled when the first travel ban was put in place and now many are wondering whether their spouses, parents or siblings will be able to get here.

Rose found a bright spot in the Supreme Court’s decision. Specifically, the majority included a “long overdue repudiation” of Korematsu v. U.S., 323 U.S. 214 (1944) which upheld the detention of Japanese-Americans during World War II.

“While certainly disappointing and not altogether surprising, I think it is important to note that (the Trump v. Hawaii) decision condones neither religious discrimination nor the president’s rhetoric concerning this particular issue,” Rose said.•