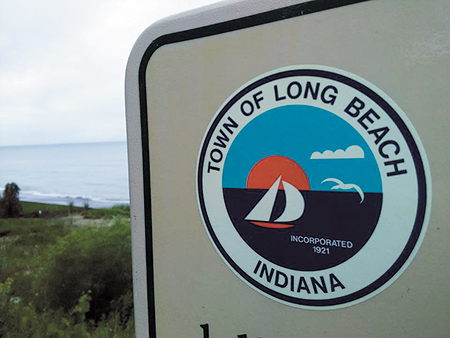 After a years-long fight, the Indiana Supreme Court in February issued a ruling that affirmed what’s come naturally to generations of Hoosiers: Indiana’s beach on Lake Michigan belongs to the public.

But the parties who sued to privatize the beach, Don and Bobbie Gunderson of Long Beach, are seeking to appeal that ruling to the United States Supreme Court. Yet the Gundersons, whose names are the only plaintiffs listed on filings to the U.S. Supreme Court, don’t own the property. They haven’t for years.

The Gundersons transferred the property at issue in this case in late summer of 2015. That was before all the attorney appearances had even been entered as the case made its way from the trial court to the Indiana Court of Appeals.

Nevertheless, the Gundersons’ names alone live on in the suit, while attorneys who argue that the shore is not public have roughly one more month to file a petition asking the U.S. Supreme Court to take the case after two state appeals were lost.

But if the Gundersons aren’t suing to privatize the Lake Michigan shoreline, who is? If the U.S. justices take the case, that question may not even come before them.

Lakeshore Drive in Long Beach is among the most desirable addresses in Indiana — the pinnacle of an elite enclave of a few more than 1,000 people, just south of the Michigan state line. It’s also the current epicenter of the Great Lakes public vs. private beach fight.

An address on the north side of Lakeshore Drive entitles the owner to an unobstructed and expansive panorama of Lake Michigan from atop sandy-soil dunes that slope to the beach of its southernmost shore.

United States Chief Justice John Roberts lived and roamed here as a boy, and when he was nominated to the high court in 2005, the Chicago Tribune described the town this way:

“Long Beach is a community that has physically changed little since Roberts and his classmates spent their summers on the Lake Michigan shoreline and rode their bikes on the twisting, tree-shaded roads. Stretched between the South Shore railroad tracks and Lake Michigan, it is an attractively crammed warren of comfy lake houses and expensive rehab projects. Homes that sold for $35,000 when Roberts was born now cost $1 million, but the community’s fabric … has not changed substantially.”

But gleaming, sprawling, multi-million-dollar homes are a fairly recent development in Long Beach — including two such developments on the Gundersons’ former property.

LaPorte County property records reviewed by Indiana Lawyer show that in September 2015, the Gundersons’ two parcels of land on Lakeshore Drive were transferred to Oakley Home Builders, Inc., a suburban Chicago company that constructs and markets luxury lakefront estate homes. Two Oakley builds on the Gundersons’ former property sold for $2.25 million apiece in May 2017 and July 2018.

It’s unclear whether Oakley or the home purchasers are involved in the suit. Attorneys who are pursuing an appeal to the U.S. Supreme Court — Aaron D. Van Oort and Nicholas J. Nelson of Faegre Baker Daniels LLP in Minneapolis — did not reply to questions about who is pushing the suit to the high court, if not the Gundersons. An Oakley co-owner did not reply to a message seeking comment.

An attorney familiar with the case who spoke on condition of anonymity suggested inflating property values is a likely motivator for property-rights groups who joined the case as friends of the court.

“It would increase the value of the property tremendously if you have a private beach where you can exclude the public,” the attorney said.

Along with property-rights groups, the case has likewise attracted numerous groups who intervened to advocate for the public trust.

Justice Mark Massa wrote for an Indiana Supreme Court that held “the boundary separating public trust land from privately-owned riparian land along the shores of Lake Michigan is the common-law ordinary high-water mark and that, absent an authorized legislative conveyance, the State retains exclusive title up to that boundary.”

The ruling affirmed a public right to walk along that part of the beach between the lake and the high-water mark and left any expansion of rights on that public trust land up to the Legislature.

But in asking for more time to file a cert petition to the U.S. Supreme Court challenging the ruling, Van Oort and Nelson wrote, “… Indiana has joined a recent trend of Great Lakes states asserting, for the first time in our Nation’s history, that they have property rights in every square foot of beach along the Great Lakes. Doing so has required those States to adopt the most aggressive interpretation possible of how the federal ‘equal footing doctrine’ applies to non-tidal waterbodies — an important question of federal law that has not been, but should be, decided by this Court.”

Despite the public interest at stake, there appears to be little or no requirement that successor parties to the Gundersons be identified in the suit, though a federal court could so order.

Indiana University Maurer School of Law professor Charles Geyh called the federal rule governing a transfer of interest in a case “among the most obscure rules in all of civil procedure.” Rule 25(c) provides, “If an interest is transferred, the action may be continued by or against the original party unless the court, on motion, orders the transferee to be substituted in the action or joined with the original party.”

Geyh cited Wright & Miller’s voluminous treatise Federal Practice and Procedure, which he noted only briefly discusses the rule, observing, “(T)he most significant feature of Rule 25(c) is that it does not require that anything be done after an interest has been transferred. The action may be continued by or against the original party, and the judgment will be binding on his successor in interest even though he is not named.”

The court has discretion to allow substitute parties and may order that a transferee be made an additional party, according to Wright & Miller. In any case, the court’s personal jurisdiction is extended over the successors in interest in the lawsuit.

Attorney Patricia Sharkey represents the Long Beach Community Alliance, which supports the public trust and is a party in the case. She said in an email the alliance is concerned the Indiana Department of Natural Resources is failing to enforce the Indiana Supreme Court ruling, creating a “‘no man’s land’ problem that shouldn’t exist and which lakefront owners have used to excuse hiring a private security guard to kick people off the beach and to scurry to try to build revetments down into the water and recklessly level dunes and plow sand from public trust property into the lake.”

Sharkey said the alliance doesn’t expect the high court to take the case, saying the Indiana decision follows well-established law and is well-reasoned. “We view the filing for cert to be a delaying tactic playing to the Indiana DNR’s wrongful decision that they will not exercise jurisdiction to the (ordinary high-water mark) until the period for cert has run,” she said.

Spokespeople for the DNR and the Indiana Attorney General’s Office did not respond to messages seeking comment.

Sharkey said the Town of Long Beach understands the Indiana Supreme Court ruling and the local police department is enforcing it. “But,” she said, “I am being contacted about a new beach ‘crisis’ almost every day.”•