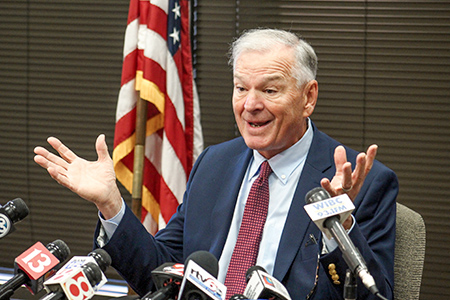 Special prosecutor Daniel Sigler said he believes the four women who accused Attorney General Curtis Hill of groping them, but he chose not to file criminal charges against Hill because believing the women would not be enough in a court of law.

The Oct. 23 announcement came after separate investigations into the attorney general’s behavior at a legislative party celebrating the adjournment of the 2018 Indiana General Assembly. One state representative and three legislative staffers accused Hill of improperly touching them and making unwanted sexual advances during the celebration at AJ’s Lounge in Indianapolis.

Sigler concluded Hill’s “consumption of alcohol was significant” that night and he was “overly friendly and touchy with everyone one in the establishment.” In addition, Sigler found the women to be truthful and credible in their belief the attorney general touched them inappropriately. However, he could not prove intent.

“He does not deny touching,” Sigler said of Hill. “There’s no denial that there was touching; there’s disagreement as to the extent of it … .”

The case, Sigler said, offered two potential charges — sexual battery, a felony, and simple battery, a misdemeanor. Because an element of the felony charge is force, the special prosecutor said that option was “quickly discredited.” The second charge was pursued, but there was no proof Hill intended to touch the women in a “rude, insolent or angry” manner.

Sigler said the place where the incident happened made the investigation difficult. The party lasted through the early morning hours, alcohol was flowing and the witnesses were not questioned for many weeks afterward. Also, video inside the bar had been recorded over by the time the investigators from the Indiana Inspector General’s Office and the Indianapolis Metropolitan Police Department asked for it.

On top of that, Sigler said he did not see much public benefit in filing misdemeanor charges against the state’s top attorney. The case, he said, would be long and complicated, the victims would have to tell their stories multiple times and the Marion County taxpayers would get handed the bill for the prosecution.

“I couldn’t find a benefit to going forward with a Class B misdemeanor prosecution,” Sigler said.

“We never doubted that Mr. Hill would be cleared of any alleged crimes,” Voyles and Lukemeyer said in a joint statement. “… Mr. Hill will continue to serve the people of Indiana in the capacity for which he was elected as the Indiana Attorney General.”

The Legislature initially investigated the allegations, and when the allegations became public, Hill complained that no one had interviewed him. He did cooperate with Sigler but did not answer questions face-to-face. Instead, the attorney general was allowed submit a video statement and responded to a request for additional information.

Sigler defended his handling of Hill.

“If you’re asking the question, ‘Was he afforded any special treatment?’ the answer is no,” the special prosecutor said. “My job was to get the facts as best I could, the unvarnished facts. You don’t go out and put the attorney general under klieg lights and have a cross examination.”

Also, in his report, Sigler noted the limitations of using the courts to get Hill to leave office. Since the allegations became public, Gov. Eric Holcomb and legislative leaders have all called on the attorney general to resign, but the special prosecutor said a conviction of misdemeanor battery would not require Hill to step down.

The governor is not backing down from his call for Hill to resign. Holcomb released a statement on Oct. 23 reiterating that he and the special prosecutor believe the victims.

“The findings show a disregard of the executive branch zero tolerance harassment policy,” Holcomb said. “My position has not changed.”•