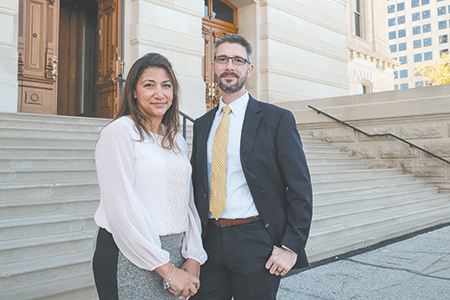 For the first time in their lives, Joe Delamater and his wife Kiamesha Colom are grieving the loss of someone who is still alive.

The Indianapolis attorneys – Delamater, a criminal defense lawyer at Razumich & Delamater PC, and Colom, a partner practicing real estate law at Taft Stettinius & Hollister LLP – encountered confusion, frustration and ultimately heartbreak during the course of a few months when they became foster parents to a baby boy. Now they are talking to Indiana lawmakers and pushing for specific changes to state statutes they say will balance the system so the right results will happen for kids.

“We’re all supposed to be team members, but many foster parents feel like they are not considered a valuable part of the team even though we have all the responsibilities and obligations of taking care of the children,” Colom said.

Their message is being planted in fertile ground at the Statehouse.

Foster parents have had a contentious relationship with the Indiana Department of Child Services. Lawsuits have been filed over reimbursement rates and subsidies, and foster families say they have been threatened with retaliation if they speak out.

In her December 2017 resignation letter, former DCS director Mary Beth Bonaventura called foster parents part of the backbone of the child welfare system. She asserted she had worked to build a collaborative relationship with them, but those efforts were being undermined and bringing about a return of the “adversarial, litigious relationship.”

Another cascade of legislation is expected in the 2019 General Assembly session, fueled by stories from foster parents such as Delamater and Colom. Ford said many legislators across the state have been hearing of problems with the foster system and treatment by DCS. In general, he said, foster parents complain they have no voice when the courts and DCS begin determining what is in the best interests of the child.

Delamater and Colom, too, did not feel their insights and observations mattered.

The couple picked up their foster son from the hospital when he was just 3 days old. He had been born to a methamphetamine-addicted mother and began experiencing his own withdrawal symptoms about a week later. According to Colom’s testimony to the Interim Study Committee on Courts and the Judiciary, he was inconsolable, colicky and his whole body would shake.

As first-time foster parents, Delamater and Colom nursed the baby boy through the “terrifying” withdrawal episode and settled in to giving him a constant supply of love, comfort and care. Initially, they said, DCS told them their foster son was pre-adoptive, and they began preparing to give him a permanent home. But then a month later, without warning, they were informed the plan had changed to reunification with the birth mother.

That began an odyssey of struggle and worry, trying to keep their foster son safe and healthy while he was allowed visits with his biological mother who was still trying to overcome her own addictions and was living in a rehabilitation facility.

Once, just as the birth mother was about to be given custody, Delamater raised his hand and told the court she had two felonies pending, eight probationary violations and two warrants out for her arrest. That, he and his wife said, was information the judge did not know about because DCS had not said anything. At another hearing, they tried to pass along a doctor’s report outlining concerns about the impact that living in a drug treatment center would have on the baby’s fragile immune system. But instead of bringing that to the court’s attention, the DCS attorney just laid the paper aside.

“He was born into a situation that he could not help,” Colom told the study committee. “The person that was supposed to help him could not for whatever her reasons. He was then given to a family who could very much help him thrive and succeed in life. And while trying to do that, we were told by DCS, ‘You’re getting too attached. If you keep going this way, we could just move him.’ That felt like intimidation.”

Their foster son came into their care in the spring, but by the fall, he had been taken away. Delamater and Colom, who with their two daughters barely had time to say goodbye, still get emotional when they talk about their boy.

“We don’t know how our foster son is doing, but I think about him daily and it terrifies me to know what could ultimately be at stake for him,” Colom said.

A mother to four daughters, adoptive mother of eight special needs children and foster mother to many more, Kristi Cundiff knows well the emotional storm that can engulf foster parents. These families take children into their homes knowing the placement is temporary and the youngsters may be there a day or several years. Still, they attach and bond with the children, which can make parting difficult.

Cundiff is the administrator and CEO of Indiana Foster and Adoptive Parents Resource and Advocacy Group, which has more than 8,000 members across the state. She marshals that resource in emergencies to find families who can take children that have just been removed from a home. She also reaches out to other agencies and helping hands in the community to help struggling parents take care of their kids.

The members of her group, Cundiff said, are saying enough is enough, and they are preparing for a “huge year for DCS legislation” in the Statehouse. Primarily, she wants to ensure the best interest of the child is always the first concern.

The need for foster care has been dramatically increasing in Indiana. In its evaluation of DCS, the Child Welfare Policy and Practice Group found 20,394 children were in out-of-home care in 2017, an 89.4 percent jump from 2005. Comparatively during that same 12-year period, three of Indiana’s neighboring states had all recorded declines in children in foster care.

Sen. Erin Houchin, R-Salem, who was a DCS family case manager for about three years, said children do better if they can remain with their own families. However, the epidemic of drug addiction has crippled many parents’ ability to provide proper care. Although quality foster families can give these youths the stable environments they are not getting in their own homes, Houchin does not believe foster parents and biological parents have to be adversaries.

“It is my hope that we can create a system by which foster parents are valued as true partners with DCS and biological families as we all work toward outcomes that are in the best interest of these very vulnerable children,” Houchin said.

Delamater and Colom said through their experience, they were shocked at how children-in-need-of-services proceedings can go.

They presented the interim study committee with detailed suggestions to amend key Indiana statutes. Overall, they are calling for four changes: foster parents to be given standing; foster parents to be given the right of first choice so that if a child previously in their care re-enters the system, the child can be returned to them; the best interest of the child trumps reunification, and; if a child is placed out of the home for 15 out of 22 months, DCS must file a petition for termination of parental rights.

Bloomington solo practitioner Tammy Minger has represented foster parents in adoption cases and has served as a volunteer attorney for the CASA program. Minger likes the idea of first choice, believing that allowing children to return to their foster parents would lessen the trauma of being removed from their home again.

But she is hesitant about strictly adhering to a 15-out-of-22-months mandate. These situations, she said, are not always black-and-white, and requiring a petition to be filed after a set period of time might be too much of a straitjacket.

In determining what is best for the foster child, Ford sees the courts as taking the lead.

“I think going into this, the goal is always getting the kid back with the biological parents,” the senator said, adding that the judicial system can help make sure parents, particularly those battling substance abuse, have the tools they need to improve. “The real role of judges and magistrates is to strike the balance to help parents get the opportunities they need to get their child back.”

Delamater and Colom acknowledge the amendments they are advocating will not change their situation. Yet they would gladly open their home again to their foster son.

“We love him and would welcome him back anytime,” Colom said.•