Soon after Marcus Golike’s body was found on the Kentucky side of the Ohio River, his relatives in Evansville raised the possibility of suicide. Golike had a history of mental illness, his family said, and he had threatened to jump into the river before.

But the Kentucky medical examiner determined Golike had died by "asphyxiation consistent with strangulation," and Kentucky and Evansville police believed the man had been murdered. Law enforcement soon focused their investigative efforts on three teenage suspects who called Golike "Uncle Mark": William, Deadra and Andrea Hurt.

At the time of Golike’s death in June 2012, William was 18, Deadra was 19 and Andrea was 16. The teens were interrogated and charged in their uncle’s death but were later cleared. Charges against the girls were either dropped or not pursued and a jury acquitted William.

But the not guilty verdict in William’s murder trial was not the end of the road for the Hurt siblings, who are related biologically and through the foster/adoption system. The three former suspects, together with their mother, Debbie, sued Evansville, several of its police detectives, the Kentucky medical examiner and two Kentucky State Police officers, alleging various violations of federal and state law, including constitutional violations.

Though the Kentucky medical examiner, Amy Burrows-Beckham, was successful on summary judgment, the remaining defendants each have at least two civil claims pending against them. Both the Indiana Southern District Court and the 7th Circuit Court of Appeals declined to fully award summary judgment to any of the remaining defendants, and the United States Supreme Court denied cert last month, which means the Evansville family is now preparing to bring their claims before a jury. 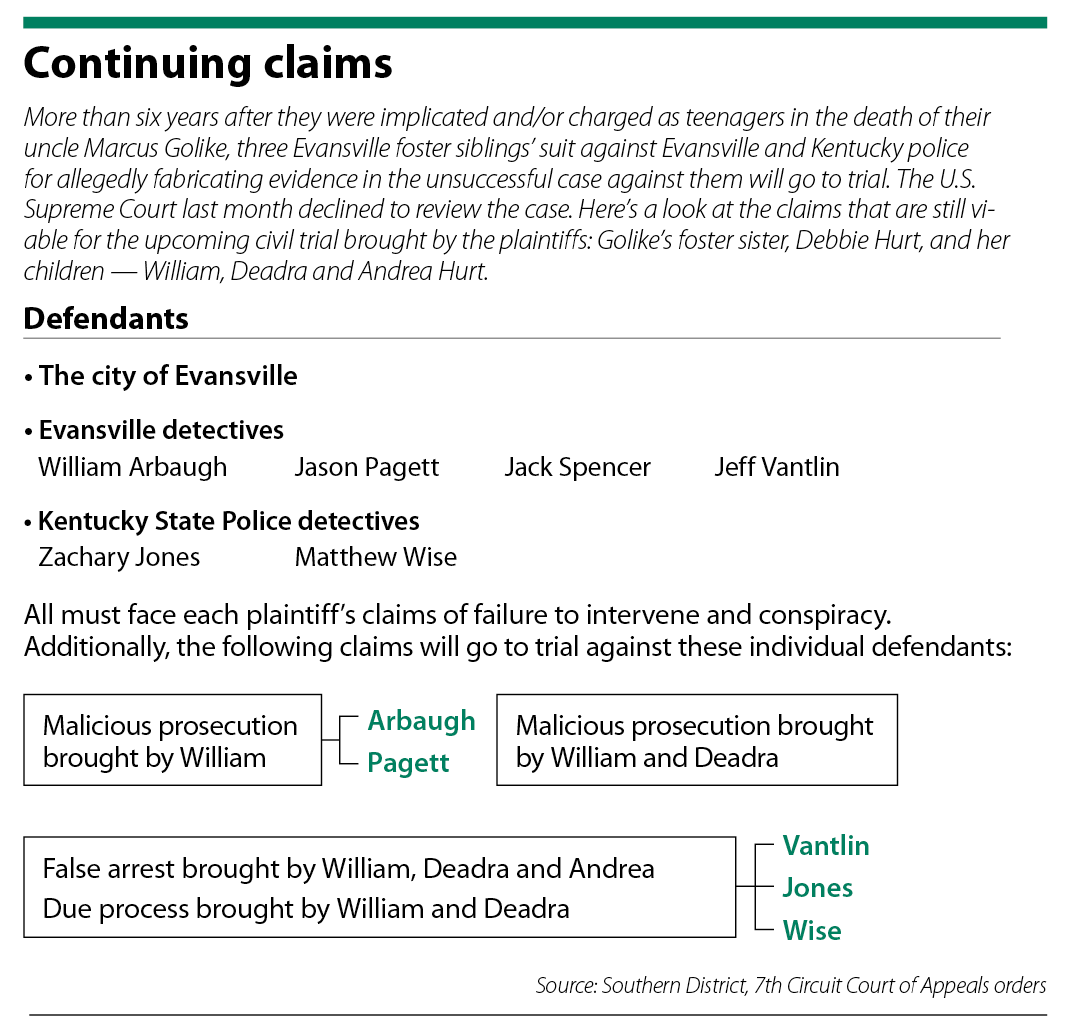 The crux of the Hurts’ civil case is that William and Deadra’s confessions to police were false and that additional evidence, including police reports, was fabricated. The defendants have maintained in court filings that the Hurts lack the evidence to prove those allegations, though attorneys for Evansville, its detectives and Burrows-Beckham declined to comment. The attorneys for Zachary Jones and Matthew Wise, the two Kentucky police defendants, did not respond to a request for comment.

According to the siblings, William was interrogated first and was fed facts that aligned with detectives’ desired narrative — that the three siblings had killed Golike, dumped his body in the river, stolen his debit card and used it to buy candy from a local convenience store. Court filings claim that after his confession, William asked detectives, “Was I close to it?” a statement his legal team says indicates he was telling investigators what they wanted to hear.

William also implicated Deadra and Andrea in his confession, and during her interrogation, Deadra was informed of William’s statements and was told that she would “hang” if she did not tell the truth. Deadra eventually confessed, but Andrea did not. Andrea was released seven days after her arrest, when prosecutors decided not to pursue charges against her, and Deadra was allowed to go free when a judge threw out her confession as involuntary.

The tactics used during the teens’ interrogations play arguably the largest role in the siblings’ malicious prosecution, false arrest, failure to intervene and other similar claims, though the allegedly fabricated police reports also feature prominently in court filings. Though many may find it difficult to believe that innocent people would confess, counsel for the teens say false confessions are not uncommon, and the Hurt family wants to shed light on that fact.

“People like these clients really feel that they were damaged, and they want to prevent it from happening to anyone else, particularly false confessions and wrongful interrogation of youth,” said Tess Kleinhaus, an attorney with Chicago firm Loevy & Loevy, who is representing the Hurts.

The techniques used to draw a confession out of William and Deadra are common in the police world, said Fran Watson, a professor at Indiana University Robert H. McKinney School of Law and founder of the school’s Wrongful Conviction Clinic. Watson said it’s not uncommon for investigators to try to “wear down” suspects by warning them of what could happen if they don’t suspect, using tactics like telling them they could “hang.”

Courts have upheld such law enforcement tactics, Watson said, but they raise eyebrows when youth are involved. According to Karen Newirth, a senior staff attorney with the New York-based Innocence Project, research has shown that people’s brains are not fully developed until their mid-20s, making youth suspects more susceptible to false confessions.

Specifically, Newirth said youth suspects are unable to fully understand the long-term consequences of providing a false confession. Juveniles may think that if they confess, they will be allowed to go home and end the difficult interrogation process, Newirth said, and they may even be led to believe that through interrogation tactics, such as when law enforcement promise to help suspects if they confess.

The law recognizes this cognitive discrepancy between adult and youth suspects in the context of life without parole or the death penalty, said Jody Madeira, an expert in children and the law and a professor at the Indiana University Maurer School of Law. But in the interrogation setting, there are no safeguards that ensure young suspects are assessed for maturity or cognitive status before an interrogation, Madeira said.

In this case, Kleinhaus said William’s question about whether he got his confession right indicated he didn’t fully understand the consequences of his confession. She also doesn’t think the fact that William and Deadra were both legal adults will undermine their case, because the standard for a false confession claim is whether police officers overbore a suspect’s will in the totality of the circumstances.

In the civil rights world, false arrest and malicious prosecution claims are less common than other types of claims because those claims have a more difficult standard, said Indianapolis civil rights attorney Scott Barnhart. He said plaintiffs have to prove law enforcement went beyond the bounds of acceptable police tactics.

“There’s a public policy interest in protecting law enforcement, and when you have a he-said-she-said situation, you have to make a credibility determination,” Barnhart said. “From that standpoint, courts give law enforcement a lot of leeway with respect to where they take investigations.”

The matter becomes even more complicated in the juvenile context, Barnhart said, because there are other stakeholders to consider, specifically parents. To that end, Newirth said in juvenile interrogations, it’s important for juveniles to have an attorney representing them to control for those other factors.

Overcoming that barrier, Barnhart said, is a matter of presenting "cut-and-dry" evidence that law enforcement could not ignore. He pointed to the examples of DNA evidence exonerating a suspect or a witness’ negative identification of a suspect in a photo array.

While DNA evidence does not play a major role in this case, the Hurts allege in court filings that law enforcement fabricated a police report in which investigators claim a convenience store clerk recognized photos of the Hurts, who allegedly came into the store to purchase candy with Golike’s debit card. But the Hurts have put forth an affidavit from the clerk who says she did recognize the photos, but told police she wasn’t sure if she had seen the teens on the night of Golike’s death or on TV during coverage of the case.

If the Hurts proceed to trial, as they are scheduled to do in September, Barnhart said their success will largely depend on whether the jury views the siblings or law enforcement more sympathetically. Their youth could work in their favor, he said, but jury verdicts in civil rights cases tend to be dependent on the facts.•