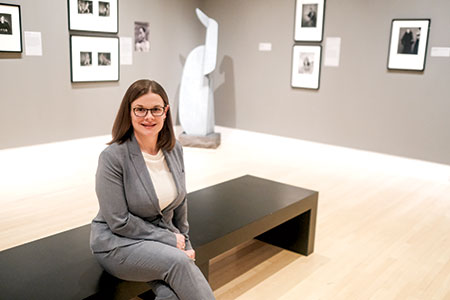 On the second floor of the Indianapolis Museum of Art at Newfields is a photography exhibition with a unique feature. Among the black and white photos taken by George Platt Lynes — many of which feature nude men — and the recreations of Lynes’ letters is a didactic on the legal issues that could have plagued the photographer as he created a controversial legacy.

Though he earned a living as a commercial and fashion photographer, Lynes’ personal photo collection prominently featured nude men. Many of the photos portrayed the men in highly suggestive manners, exposing the artist to a litany of potential legal pitfalls. What right to privacy did the models have? Would his work, created in the mid-20th century, violate obscenity laws of the time?

Art museums don’t always elaborate on the legal aspects of the works they feature, but the IMA was uniquely qualified to opine on the legalities of Lynes’ work because of one of the exhibition’s three curators: Anne Young, the museum’s manager of rights and reproductions. In addition to being a photographer and museum professional, Young also recently completed the master’s of jurisprudence program at Indiana University Robert H. McKinney School of Law, focusing on intellectual property law.

Even before she began her legal education, Young forayed into the world of IP law by spearheading the creation of a first-of-its-kind book on IP considerations for museums and libraries, “Rights & Reproductions: The Handbook for Cultural Institutions.” And now, with a formal legal education and years of experience working with cultural institutions, Young is taking on a new role at the IMA that will allow her to combine her two areas of expertise into one job description.

“I really wanted to have a deeper knowledge and … really be conversant with other lawyers in the work of museums, intellectual property law, nonprofits and how those intersect,” Young said.

An artist with degrees in art history and photography, Young began her career as a photo archivist with the Kinsey Institute at IU Bloomington. From there she moved to the Indianapolis Museum of Art, taking on the role of rights and reproductions coordinator before becoming manager.

IMA Chief Operating Officer Katie Haigh said rights and reproductions issues can be difficult, because much of the work requires people like Young to make close judgment calls. Rights and reproductions professionals must answer the question of when fair use is applicable versus when a license or other permission is necessary, Haigh said — questions with answers that sometimes can go either way.

As she settled into her role at the IMA, Young likewise realized there was no centralized resource for her to consult when making those judgment calls. So, the museum decided to write the book, literally, on rights and reproductions guidance, with Young leading the charge.

“There’s all this stuff on intellectual property and copyright and licensing from a lawyer’s perspective that really delves into things,” Young said, “but there wasn’t anything for the general practitioner in museums, libraries, archives, special collections that are often the ones having to utilize this and interpret these laws.”

Though she was experienced in making decisions about fair use and other similar IP issues for the IMA, Young realized she did not have all the requisite knowledge to create the handbook on her own. Thus, she organized a team of professionals like herself — coming from well-known institutions including The Getty in Los Angeles and the Guggenheim Museums, and organizations including Creative Commons — and tapped a group of lawyers to review the book’s legal discussions.

The initial drafting of the handbook took about three years of research, writing and editing, with the project financed through grants. The museum professionals wrote about issues ranging from fair use to publicity and privacy rights and more, while the first chapter, written by lawyers, sets up the applicable legal framework. The book also examines existing IP caselaw and applies it to museum and library settings.

In the short time between the two editions, Young said IP law had changed enough that her team had to review and update the caselaw discussed in the book. Today, the handbook is now widely referenced in museums and libraries nationwide, Haigh said, and it is also required reading in many cultural institution courses.

The nature of Young’s career had given her a general interest in IP law, but her work on the first edition of the handbook sparked an interest in pursuing a formal legal education. However, the museum professional didn’t want to be a lawyer — she just wanted to know more about the areas of law that intersect with her work.

That sort of interest in the law made Young a perfect candidate for McKinney’s master’s of jurisprudence program, said Lea Shaver, the IP law professor who served as Young’s adviser and a reviewer of the 2018 edition of the book. Unlike a traditional J.D. degree, the M.J. program allows students to focus their studies on areas of law that are relevant to their nonlegal careers. With her real-world experience, Shaver said Young excelled in her coursework and was able to bring a practical perspective to class that benefitted other law students and Shaver herself.

Seeing the value in the M.J. program to the IMA, the museum supported Young’s legal education with both money and time. Rather than working 40 hours a week and going to school in the evenings, Young was allowed to attend school during the workday, with the understanding that what she learned from her IP, copyright and museum law classes would benefit her professional work.

That vision came to fruition when Young finished her M.J. degree last year. Though she is not a lawyer, she uses her legal knowledge to examine the IP-related questions that come before the museum and opine on the legalities of those questions.

For example, while Young can’t offer legal advice, she frequently shares her thoughts on whether the IMA’s IP questions might require the assistance of counsel. She also serves as a liaison between the museum and the lawyers it works with. Plus, the rights and reproductions manager was able to user her trademark law knowledge to help the museum with its recent rebranding and her contract law knowledge to modernize the IMA’s contract templates.

But the true marriage of Young’s museum and legal expertise is shown in the Lynes exhibition, where she combined her love of photography with her knowledge of the law. Though Lynes did not face any known lawsuits for his controversial photos, Young said her legal training allowed her to explain the potential legal threats he faced in a way that was easily understandable. That, she says, is how she hopes to put her M.J. degree to wider use.

“Breaking down the laws into everyday English that people can understand, I think that’s been one of my big goals …,” Young said. “I can go through and I can read the caselaw and read the decisions and interpret all of the legalese, and then to be able to break it down and explain it to other people without the legalese.”

The exhibition, “Sensual/Sexual/Social: The Photography of George Platt Lynes,” is open at the IMA through Feb. 24.•