It’s been almost three years since the Indiana Supreme Court launched the Commercial Courts Pilot Project, and in that time more than 350 cases have been heard in the specialized courts in six participating counties.

Those cases generally deal with complex areas of commercial and business law, which can be foreign to judges who oversee more general dockets. But with overbooked caseloads slowing down Indiana courts, businesses needed a venue for quick resolution of time-sensitive disputes.

The commercial courts pilot project has been successful enough to prompt a working group to recommend that the courts become a permanent fixture of Indiana’s judiciary. A Supreme Court spokeswoman said it’s highly likely justices will back the working group’s recommendation, which would allow the commercial courts to become permanent Hoosier courts when the pilot ends June 1. 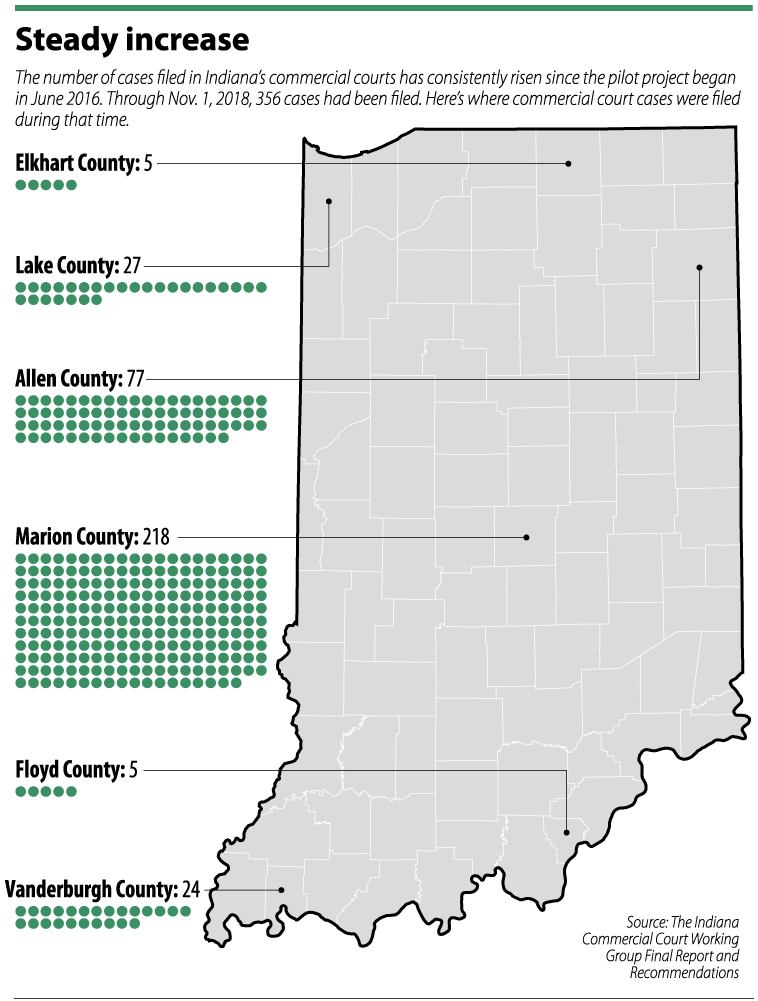 Participating judges and attorneys, as well as business leaders, say the commercial courts have made Hoosier business litigation faster and fairer. Statistics show most motions are resolved in less than a month, and anecdotal evidence says the decisions that come from commercial judges are specific and well-reasoned.

Even so, commercial court participants say there are a few tweaks they would make to the new court system if it becomes permanent, particularly as it relates to discovery and case management. But like other specialized Hoosier dockets, such as the Indiana Tax Court and problem-solving courts, proponents say commercial courts have made it easier for litigants to resolve their unique questions of law.

Before the creation of the commercial courts, a national survey from the United States Chamber of Commerce frequently gave Indiana low marks on the efficiency of resolving business litigation, said Kevin Brinegar, president and CEO of the Indiana Chamber of Commerce. Brinegar said businesses would often express their frustration about the Hoosier legal system, complaining that their cases would languish before judges who rarely, if ever, considered the specialized legal issues the businesses needed resolved.

Likewise, Marion Superior Judge Heather Welch, who oversees Marion County’s commercial court docket, said businesses that have to wait years for a ruling might be negatively impacted in terms of operations or even dollars. It was against this backdrop that the commercial courts were formed in June 2016, with operations in Allen, Elkhart, Floyd, Lake, Marion and Vanderburgh counties.

“The utilization has been not insignificant,” Brinegar said.

In Welch’s experience, those filings tend to fall into three broad categories: cases seeking equitable relief, contract disputes and commercial lease defaults. Those disputes often require quick access to the courts, Welch said, requiring her and her five colleagues to be nimble when handling their commercial dockets.

With a docket of 2,300 to 2,500 total pending cases, giving quick attention to one particular piece of litigation can be difficult for a judge such as Welch. But there are some unique features of the commercial court system that allow her and the other commercial court judges to be flexible.

One of the most beneficial features is the use of lawyer law clerks, Welch said. Unlike law student externs, the commercial court law clerks are experienced attorneys who have real-world experience in legal research.

That’s helpful because the law clerks can assist the busy commercial court judges in learning about the specialized legal issues that come up in business litigation, said Kevin Toner, a Faegre Baker Daniels partner who has litigated cases in the Allen and Marion County commercial courts. That enables the judges to get to the heart of commercial litigation in a more expedient manner while also ensuring they have a full understanding of the legal issues being presented, Toner said.

Additionally, Fort Wayne attorney Jeremy Grogg said commercial court attorneys are required to present the judges with a proposed trial order at the outset of a case. Likening the order to federal court disclosures, Grogg, of Burt Blee Dixon Sutton Bloom, said the proposed orders allow both parties to lay all their cards on the table and propose a timeline that will ensure the case is resolved relatively quickly.

In the business community, Brinegar said he has only heard positive feedback about the efficiency of the pilot commercial courts. A report from the Commercial Court Working Group showed that as of Nov. 1, motions to dismiss were resolved in an average of 26 days, motions for preliminary injunctions/temporary restraining orders in 15 days, and motions for summary judgment in 24 days.

When the Commercial Court Pilot Project began, litigants were promised judges who could offer accurate opinions in highly specialized areas of the law. To meet that ideal, Welch said she and her colleagues attended several training sessions to ensure they were well-versed in business and commercial law.

That training included seminars on reading financial documents, meetings with judges from existing commercial courts and participation in the American College for Business Court Judges’ conference. The law clerks have also been helpful in this regard, Welch said, because they can do background research and discuss the legal issues with the judges behind the scenes.

“The lawyers are not spending time educating a judge on basic Indiana law or complex business law,” Welch said. “We’re getting to the meat of the issue.”

Having a solid understanding of business law leads to more consistent legal rulings, which Brinegar said is important to Indiana businesses. Entrepreneurs want to know what they can expect from litigation, and the commercial courts are helping Indiana develop a consistent body of business law that provides a clear picture of where Indiana law stands on various commercial issues.

So far, Brinegar said he has not heard any negative feedback about the commercial court system from businesses, and Toner and Grogg likewise said they have had generally positive experiences. The working group’s report also contains several letters of recommendation in support of making the courts permanent, though it also offers suggestions for improvements should the Supreme Court agree.

For example, the working group has recommended that all commercial court interim rules be made permanent rules, and that some of those rules be adjusted. One such rule is Interim Rule 5, which currently allows a judge to appoint a special master only if all parties agree.

But the working group recommends judges be given discretion over whether to appoint a master, a change Welch said she agrees with. The use of special masters can take some of the load off of judges, she said, giving the example of a financial expert who could serve as a third party to oversee a financial dispute.

Welch also said she would like to see changes in how discovery disputes are resolved, especially considering the often huge amounts of discovery that can accompany commercial litigation. The working group addresses that issue by recommending that existing Commercial Court Discovery Guidelines be made into court rules. Those guidelines call for discovery to be “proportional to the needs of the case.”

Among other recommendations in the November report is one to explore the expansion of commercial courts into other counties. Welch said she would support such an expansion, with her and Brinegar both noting the specialized courts will likely improve Indiana’s business climate.

“I think it will be a positive over time for how we’re viewed and how our legal system is viewed,” Brinegar said.•