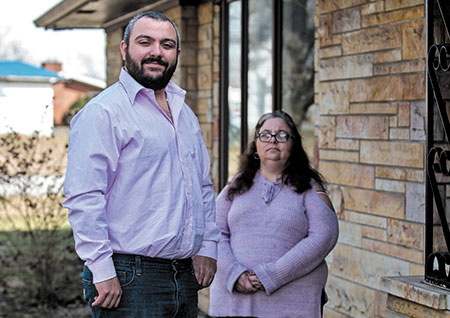 Aaron Fairbanks estimated he lived in more than a dozen houses during his childhood as his family chased the dream of owning a home.

In the meantime, Fairbanks’ family was responsible for all improvements and refurbishments. The houses needed major repairs — new plumbing, electrical systems, furnaces, air conditioners, insulation and, in one instance, they added a new master bedroom. Fairbanks remembers wiggling into crawlspaces to install insulation and chopping wood to feed the fireplace because the central heating system did not work.

Always, the family lost the homes.

Sometimes the bills piled up, finances dwindled, and they could not keep up the payments. Other times, the local sheriff knocked on the door with an eviction notice because the seller, who still had the title to the house, had not maintained the mortgage payments and the home had fallen into foreclosure.

As a result, the family would pack their belongings and move without getting any compensation for the money and sweat equity they had spent making the dwellings habitable.

“We’re trying to find a home,” said Fairbanks’ mother, Lisa. “We had four kids, we wanted to raise our four kids in a home. We just wanted to have homeownership. I think that’s what everybody wants.”

A bill that passed through the Indiana House 82-14 and is headed to the Senate would protect families such as the Fairbankses from predatory “principal dwelling land contracts.” House Bill 1495 contains provisions that require the buyers be told the value of the property and how much they will ultimately pay for it if they complete the terms of the agreement. Also, after they pay 5 percent or more of the purchase price, buyers will be subject to foreclosure if they fall behind in payments, rather than being evicted.

“It’s an important issue. It’s something that’s received very little attention, and there is almost no consumer protection in current law for land contracts,” said Rep. Ed Clere, R-New Albany, who co-authored the bill with Democratic Rep Rita Fleming of Jeffersonville and bill author Rep. Vanessa Summers, D-Indianapolis. “I’m glad we’ve been able to come together across the aisle and work on a solution.”

Since the foreclosure crisis, Indiana has seen a dramatic increase in rent-to-own and land contracts that put buyers at a disadvantage. Large swaths of vacant and abandoned houses were bought at cheap prices, put back on the market and offered to low-income buyers who cannot qualify for traditional 30-year mortgages.

Housing advocates, legal aid attorneys and service providers say while these arrangements are not inherently bad, many sellers of rent-to-own and land contract properties operate under a business model where they make a profit when the buyer fails. Typically, interest rates are high and the conditions of the homes are such that the buyers must invest in major repairs to make the residence livable.

Like the Fairbanks family, the monthly payments, high interest rates and cost of repairs can drain many buyers’ wallets. They are usually then evicted and left with nothing for all the work they put into the home. But the seller gets the home back without paying for improvements and looks for the next buyer.

Lisa Fairbanks pointed out that anyone can fall victim to a predatory land contract, not just the unsophisticated. Her husband has attended college and served in the military, while she has an associate degree from Indiana University Southeast.

“So a lot of times, we would take our income tax return, we got the Earned Income Tax Credit, and used that money, usually give (the seller) $5,000 or $6,000 down payment to move into the house,” she said. “And then, as soon as we got into the house, things started going wrong.”

The authors say HB 1495, which applies only to sellers who enter into four or more contracts a year, is not overly proscriptive and is designed to protect buyers as well as sellers in these kinds of transactions. For example, both parties can cancel the contract within three days after it is signed, and the real estate will be forfeited to the seller if the buyer has abandoned the property and paid less than 5 percent of the purchase price.

Protections for the buyers include the requirement that a property receive a Federal Housing Administration appraisal, a list of health code citations in the previous five years and a statement of how those violations were corrected. While the bill does not cap the interest rate, it does require the disclosure of the annual percentage rate and a clear statement as to which party is responsible for property taxes, insurance and maintenance. Also, any liens against the real estate must be disclosed and all pre-existing liens must be satisfied by the end of the contract.

At the bill’s hearing before the House Committee on Financial Institutions, Reps. Jeff Ellington, R-Bloomington, and Heath VanNatter, R-Frankfort, raised concerns about the appraisal provision. They speculated the cost could make the homes even more expensive for low-income buyers.

Chase Haller, housing attorney at the Neighborhood Christian Legal Clinic, responded that the benefit of the appraisal outweighed the cost. The expense is relatively minimal compared to the down payment, Haller said, and buyers will know the condition of the residence they are purchasing.

Speaking after the House voted 82-14 in favor of HB 1495, Haller said the measure provides transparency for buyers and puts some guardrails on land contracts. If it becomes law, Haller said he will no longer have to warn clients about the “Wild West” nature of these transactions because they will be better protected from predatory practices.

“The bill strikes a careful balance between buyers and sellers without overreaching into the wishes of the parties,” Haller said. “The broad support the bill received in committee and in passage from the House reflects that the bill honors the broad freedom to contract while maintaining some common-sense guideposts that require fundamental fairness and transparency.”

When Illinois had a resurgence of predatory rent-to-own contracts in the wake of the foreclosure crisis, the Illinois General Assembly passed legislation in May 2017 targeting those kinds of transactions. The measure, said Bob Palmer, policy director for Housing Action Illinois, tweaked some old statutory protections that unscrupulous sellers were circumventing and required more disclosures so buyers now understand what they will be getting for their money.

The Installment Sales Contract Act took effect January 2018, so no hard data is available as to its impact. But phone calls to HAI have been slowing, Palmer said, and some stories suggest the law is bringing positive change.

One of those stories comes from Embarras River Basin Agency, Inc., a nonprofit in Greenup, Illinois, that serves low-income residents.

A single mother contacted the agency in late 2018 after receiving notice that she and her children were going to be evicted from a mobile home she was buying on a rent-to-own basis, according to Sandy Deters, home counseling coordinator for ERBA. Only after the family had moved in did they discover broken electrical outlets, a water leak and black mold.

The contract said the management would make any needed repairs in the first 30 days but the company, Deters said, did not abide by those terms. Unable to cover the repair costs herself and worried about her children’s health, the mother was facing the possibility of becoming homeless.

ERBA enlisted the help of a pro bono attorney who wrote a letter and cited to the new law. The mother got her deposit back before she moved out and was able to use that money to secure a new place to live.

“I think they do prey on the disadvantaged,” Deters said of some rent-to-own sellers. “They don’t think the buyers have the resources to be able to fight.”•