A bill that proponents say would just add three words to Indiana’s juvenile waiver statute is being met with strong opposition from local and national groups who counter that the addition would be a step backward for juvenile justice and move Indiana in a direction counter to other states.

Senate Bill 279 would allow children as young as 12 to be waived into adult court after being charged with attempted murder. The measure, authored by Sen. Erin Houchin, R-Salem, has been described as a response to the May 2018 shooting at Noblesville West Middle School, which left a student and teacher gravely injured. At the time, the Hamilton County Prosecutor’s Office decried the state law that would not allow the offender to be charged as an adult because he was under 14 years of age.

The Children’s Policy and Law Initiative of Indiana opposed SB 279 from the start. Although supporters argued the bill just closed a loophole, CPLI said the legislation was a major policy shift that would neither deter crime nor rehabilitate the offender. Instead, according to the nonprofit, SB 279 would inflict lifelong physiological and psychological trauma that would put the youth at risk of committing additional crimes as an adult.

“Supporters of the bill often reference the Noblesville West Middle School Shooting,” said JauNae Hanger, president of CPLI. “This incident was, unquestionably, very tragic for everyone involved, but state public policy should not be based on retribution arising out of a specific incident; rather, law should be grounded in the best interests of public safety and the humane treatment of children.”

But the Indiana Prosecuting Attorneys Council maintains that amending the statute to include a waiver for attempted murder would give judges discretion but would not require youthful offenders to be sent to adult court.

“SB 279 would simply change that statute to include attempted murder, for instances like the Noblesville shooting where a 13-year-old was clearly ready to kill a lot of people and probably would have succeeded if not for the teacher and medical professionals saving the female victim,” said Dave Powell, IPAC executive director. “We think prosecutors should at least have the option to ask for a waiver in these especially heinous acts.”

Although the bill stalled in the House, an attempt by the author to include the waiver language in an amendment to another bill is keeping SB 279 — and the controversy — alive in the Statehouse.

Indiana’s move to lower the age at which juveniles can go into the adult system runs counter to the national trend. Many states are opting to keep young offenders, even those charged with serious crimes, in juvenile court by raising the waiver age, according to the Campaign for Youth Justice. For example, California and Kansas increased the age at which a child is eligible for transfer to 16, while Connecticut and New Jersey raised the mandatory transfer age to 15 and Rhode Island eliminated all mandatory waivers.

Campaign for Youth Justice CEO Marcy Mistrett and state campaigns director Brian Evans called SB 279 a “misguided response” to violent behavior by juveniles. Pointing to research that shows young offenders can be rehabilitated, Mistrett and Evans said holding juveniles in adult prisons while they are awaiting trial will not provide them with the programming they need to treat the underlying issues that caused them to act out.

Mistrett and Evans also pushed back on the notion that children and teenagers sentenced to a juvenile facility until the age of 18 are not being held accountable for their crimes. Juvenile jails are secure facilities where youngsters are locked in and are under the watch of guards for years, sometimes being held until they turn 21.

A total of 217 juveniles representing 238 cases were under the jurisdiction of Indiana adult courts in fiscal year 2018, according to a report from the Indiana Criminal Justice Institute. Most of the cases, 66 percent, were directly filed to adult court, while 34 percent were waived. Juveniles charged with robbery were most likely to result in a direct file, while youngsters charged with burglary were most commonly waived.

Also, the report found, 103 charges resulted in a guilty disposition in state fiscal year 2018. The most common sentence received was suspended, followed by a prison sentence and jail credit.

Liz Ryan, president and CEO of the Youth First Initiative, is surprised by SB 279. Ryan noted Indiana has been doing positive things with its juvenile justice system, but now the state appears poised to redesign its penal system because of “one exceptional case.” She, too, pointed to voluminous research showing intervention efforts ranging from providing mentors and mental health counseling to helping with anger management and grief can transform a young offender’s behavior.

However, putting them in adult prisons will cut them off from rehabilitative programs in juvenile facilities, making them likelier to commit another crime when they are released, Ryan said. In addition, going to an adult facility will put the juvenile at greater risk of being assaulted or placed in solitary confinement.

“If you put a kid in the adult criminal system,” Ryan said, “there’ll be a dramatic increase in the likelihood they’re going to be engaging in delinquent and criminal behavior while you’re putting them at serious risk for harm and abuse.” 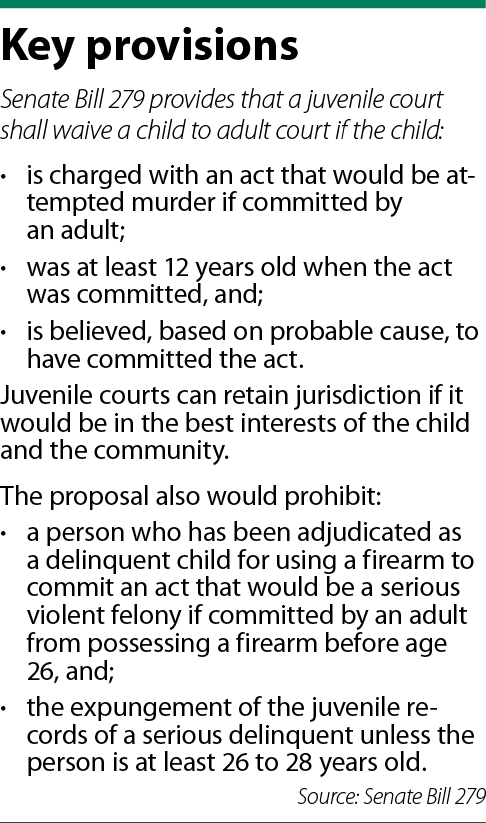 One group that has not given any input on SB 279 is the Commission on Improving the Status of Children in Indiana. Although the 2013 statute creating the commission mandated that the body make recommendations about pending legislation, Julie Whitman, executive director of CISC, said doing that is difficult.

In particular, Whitman noted the commission is constrained by the competing agendas brought by the members who represent three branches of state government and who are Republican and Democratic legislators. Also, to take a stance on a bill, a majority of the commission must agree. With SB 279, reaching a consensus could have been difficult because Houchin, who authored bill, is on the commission’s executive committee. Meanwhile, Rep. Wendy McNamara, chair of the House Courts and Criminal Code Committee — who is not giving the bill a hearing — leads the commission’s Child Services Oversight Committee.

The commission has not even discussed SB 279, but Whitman said it is among the 200 child-related bills she is tracking through the Legislature.

After SB 279 sailed through the Senate on a 45-3 vote, McNamara put the bill on the back-burner. The Evansville Republican said the measure created a “very broad policy shift,” and she wanted more protections included in the legislation so that youngsters would not be automatically swept into the adult justice system.

“I don’t think (SB 279) was done in haste,” McNamara said, “but I think it wants to try to solve a problem that we need to spend a little bit more time on figuring out so that we don’t catch people in the loop that don’t really need to be there.”

Houchin has since introduced an amendment into House Bill 1114 that would add the waiver language to the Indiana Code. As of IL deadline, the Senate had not voted on either the amendment or HB 1114.

CPLI views the move as circumventing fair consideration and intentionally disregarding the rules.

“Advancing such an important public policy shift for children without a thorough vetting of the issues in both legislative houses, especially given the high level of opposition to the passage of this legislation,” Hanger said, “is irresponsible and will not serve children or this state well.”•