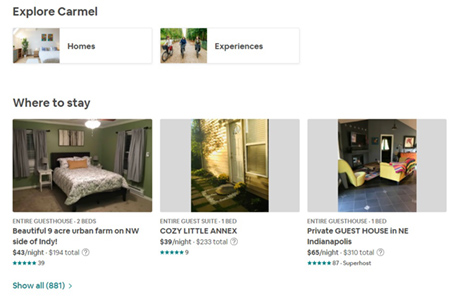 The online short-term rental economy is booming nationwide, with homeowners across the country opening their houses to travelers looking for a temporary place to stay. Airbnb is arguably the most popular vacation rental platform, though other companies such as VRBO and HomeAway are also major players in the market.

As the popularity of Airbnb and similar platforms has grown, local governments have implemented regulations to control the rapid growth of home-shares, though Indiana law leaves such regulation largely to the state. But platforms such as Airbnb have not responded favorably to such regulation and in some cases have taken the issue to court.

In one such case out of the 9th Circuit Court of Appeals, HomeAway.com, Inc.; Airbnb Inc. v. City of Santa Monica, 18-55367, 18-55805 and 18-55806, Airbnb and HomeAway argued a local ordinance in Santa Monica, California, violated the 1996 Communications Decency Act’s prohibition on certain internet regulations. But with the help of an amicus brief submitted by several professors — including two professors from the Indiana University Kelley School of Business — Santa Monica successfully urged the 9th Circuit to uphold its local regulation because its terms are not implicated under the CDA.

That ruling, experts say, is a victory for local government regulation and could open the door to additional home-share regulations across the country.

Following on the heels of a similar San Francisco lawsuit that was settled, the Santa Monica litigation involved Local Ordinance 2535. The ordinance imposes four duties on platforms such as Airbnb and HomeAway operating in Santa Monica:

• Collect and remit transient occupancy taxes;
• Regularly disclose listing and booking information to the city;
• Refrain from booking transactions for nonlicensed properties, and;
• Refrain from collecting a fee for ancillary services.

According to the 9th Circuit’s opinion, “Santa Monica’s council reported that the proliferation of short-term rentals had negatively impacted the quality and character of its neighborhoods by ‘bringing commercial activity and removing residential housing stock from the market’ at a time when California is already suffering severe housing shortages.” Thus, the legislation was designed to regain local control over the housing market by allowing only licensed home-shares — whereby the residents would stay on-site with the guests — to continue in the city.

Airbnb and HomeAway took specific aim at the third duty imposed by the regulation, which prohibits them from booking transactions for nonlicensed properties not included on the city’s registry. Their argument was that the ordinance is unlawful given that section 230 of the Communications Decency Act extends immunity to online companies who publish third-party content.

Kellen Zale, a property, land-use and local government professor at the University of Houston Law Center, likened that CDA provision to a situation involving a negative Yelp review. The person who wrote the review could potentially be sued for defamation, Zale said, but Yelp could not be sued for publishing the defamatory comments because it is protected by section 230.

An attorney for Airbnb and HomeAway did not respond to a request for comment about the litigation.

According to the plaintiffs’ court filings, the ordinance violated the CDA by requiring the platforms to monitor third-party content on their websites and remove content that is not in compliance. But in their briefs, including the professors’ amicus brief, Santa Monica and its amici argued the platforms’ reading of section 230 was overly broad.

Specifically, Kelley professors Abbey Stemler and Matthew Turk — both of whom are lawyers and assistant professors of business law and ethics — said the platforms’ argument misconstrues the “publishing” provision of section 230. Previous 9th Circuit precedent has defined “publishing” as “reviewing, editing, and deciding whether to publish or to withdraw from publication third-party content.”

Section 230 pre-empts regulation that would impose liability for a website’s “publishing” function, but the amici argued, and the court agreed, that Ordinance 2535 doesn’t implicate publishing. In the context of the plaintiffs’ argument, the court disagreed with the argument that the ordinance would require the platforms to monitor third-party content — here, the vacation rental listings posted to their websites — and remove noncompliant listings.

“Rather, the only monitoring that appears necessary in order to comply with the Ordinance relates to incoming requests to complete a booking transaction — content that, while resulting from the third-party listings, is distinct, internal, and nonpublic,” the circuit court wrote.

Speaking with Indiana Lawyer after the 9th Circuit’s March 13 decision, Stemler and Turk said the only “monitoring” Airbnb and HomeAway are being asked to do is offline and, thus, outside the purview of the CDA. Turk said the platforms’ main function is to serve as a financial transaction intermediary between the hosts and potential guests.

“All they need to do is monitor behind-the-scenes activity,” Turk said. “… Essentially if you look at the regulation, it doesn’t ask them to edit or remove unlicensed properties to comply. You can leave your website intact — just don’t complete the transactions offline that are illegal.”

From a business perspective, Stemler said the platforms’ interpretation of section 230 was essentially an argument that they can’t be regulated because they do business online. But while the CDA was drafted in an effort to promote the growth of the internet, Congress’ intent was not to give full immunity to online companies, she said.

“We know that online businesses can and should be regulated,” she said. “Just because an ordinance places a burden on the company does not mean the company can avoid it using this old tech law.”

Looking nationwide, Stemler said the 9th Circuit’s Santa Monica decision could be a green light for other local governments considering imposing similar regulations on their vacation rental markets. The Indiana Legislature passed a law in 2018 giving most of the control over short-term rentals to the state, but some communities have still attempted to implement local controls, as well.

The most prominent example is Carmel, which has enacted an ordinance requiring homeowners to obtain a special zoning exception before operating a short-term rental. Homeowners can obtain the exception by appearing before a single hearing officer and paying a $50 permit fee.

Appearing before a single hearing officer, as opposed to the full Board of Zoning Appeals, expedites the process for residents interested in opening their homes to short-term guests, Carmel Mayor Jim Brainard said. But local residents are still allowed to attend the hearing and voice any opposition to the zoning exception, a provision Brainard said is designed to ensure residents have a say in matters that affect their neighborhoods.

“Government closest to the people, we believe, is the best government,” Brainard said.

According to Zale, cities such as Boston and Miami have sought to implement regulations similar to Santa Monica’s, and the 9th Circuit’s ruling could serve as a guide to the federal courts hearing the challenges to the ordinances in those East Coast cities. Other cities may soon follow suit, though Turk noted jurisdictions such as Indiana and Texas are less regulation-friendly than places like Santa Monica, so those local governments might not take the same policy stance.

“But for any other city or town or state trying to regulate these platform-based business models like Airbnb and Uber,” Stemler said, “you can see a clear path to how they can do that.”•