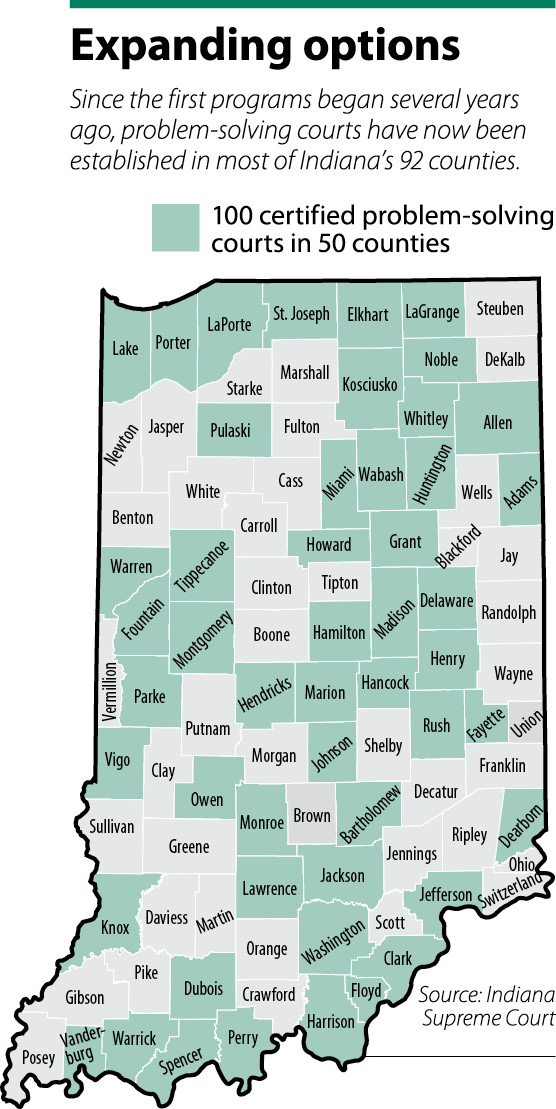 Across 50 Indiana counties, 100 courts are operating under a nontraditional judicial model.

The proceedings in these courts aren’t adversarial, they’re collaborative, allowing judges, litigants and lawyers to collectively work toward a desired outcome. And the parties aren’t limited to judges, attorneys and clients – community stakeholders are also integral.

As Indiana’s 100th problem-solving court begins operations in Pulaski County, jurists presiding over the 99 established courts praise the problem-solving initiative as an innovative approach to addressing personal and societal woes. The programs address issues such as addiction, mental illness, domestic violence and veterans’ problems, placing an emphasis on treatment, incentives and sanctions to get to the heart of the problems that land Hoosiers in legal hot water.

As the Indiana judiciary celebrates its milestone 100th problem-solving court, the plan is to keep that number rising. Though some judges admit they were initially skeptical about the effectiveness of this alternative court model, their minds have been changed as they have watched lives transform in “miraculous” ways.

“If you weren’t a believer before the first day, you left court a believer,” said Magistrate Judge Sherry Hartzler, the judicial officer who presides over Allen County’s family recovery court.

“To go from 15 to 100 is almost unprecedented,” Cleary said. “I think the great tragedy of the drug epidemic has been devastating … and counties have realized, ‘We’ve got to do something different.’”

That “something different” is the idea of a nonadversarial proceeding in which defendants facing criminal and/or civil charges can work with the court to address the underlying issues that led to their legal troubles. In Pulaski County’s new court, for example, Judge Crystal Brucker Kocher said many veterans who find themselves in court are suffering from post-traumatic stress disorder.

Rather than immediately sentencing those veterans to jail time for substance abuse or domestic violence, Brucker Kocher said her court will connect veterans with treatment providers to help ensure they don’t reoffend. Additionally, veterans in the court will be paired with local veterans who serve as mentors.

It’s a similar model in Marion County’s mental health court, where Judge Amy Jones presides over two dockets, one for pretrial diversions and another for post-conviction cases. Participants in Jones’ mental health court all have a diagnosed mental illness — and many also have substance abuse disorders — so she works collaboratively with prosecutors, defenders, probation officers and case managers to determine and administer appropriate treatment.

Sometimes that means pulling from a designated emergency fund to help a participant meet a co-pay requirement. Sometimes it means helping them keep track of their appointment schedules. And for the post-conviction cases, it means pairing the litigants with certified recovery coaches.

“The big thing is to spot issues and barriers and help them address them,” the Marion County judge said.

Cleary’s mind was changed by what he saw in problem-solving court — lives being dramatically changed. He’s witnessed 10-year drug abusers become completely clean, and he’s seen families reunited despite what he thought were impossible circumstances.

“I was seeing miracles happen,” he said.

But the road to miracles isn’t easy. In Jones’ mental health court, litigants are given an opt-in period where they can decide if the demands of a problem-solving court — which include regular court appearances and specific progress benchmarks — are right for their situation. Sometimes, when faced with the opportunity to take a time-served plea, Jones said litigants will choose to leave the mental health court in favor of pleading and quickly putting the matter behind them.

For litigants who choose to enter problem-solving courts, the judges guide them through multi-phase programs. In Pulaski County’s new veterans court, for example, litigants must succeed at every step of a four-phase process before they can graduate from the program.

Similarly in Allen County’s family recovery court — which is designed to address families affected by drug addiction and child removal — Hartzler guides the participants through a three-phase process. Phase I addresses addiction, Phase II addresses education, employment and coping issues, and Phase III addresses barriers to family reunification. At the conclusion of the program, successful participants can find themselves reunited with their children.

“It’s the hardest part of my week,” Hartzler said, “but it’s my favorite part.” 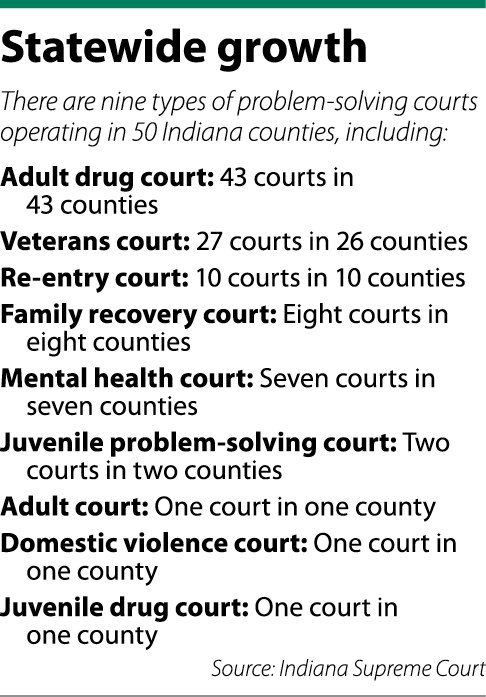 Those relationships are built by sharing in the participants’ successes and failures, Hartzler said. For example, when a litigant achieves an important milestone, such as 30 days of sobriety, the judges celebrate that achievement in front of the entire group and hand out incentives, such as gift cards or other tokens.

The reverse is also true: when a problem-solving court participant fails, everyone will know, but the response is not to chastise. While the judge will impose a sanction, the nature of problem-solving courts is such that litigants support one another in their failures. Judges also take a different view of these failures, with Hartzler saying she often feels more like a mom than a judge.

“You tell them, ‘You did this thing, but you’re not a bad person. What you did was a bad thing, and you’re going to get a consequence, but that doesn’t mean we don’t like you,’” the magistrate said.

As Pulaski County begins to build its first problem-solving court, Brucker Kocher said her goal as judge is to likewise build a support network for struggling vets. Her court will soon receive training from the national organization Justice for Vets, and she hopes that training will shed light on the most effective ways to support struggling veterans on the road to recovery.

Brucker Kocher is being initially cautious about her hopes for the court, noting that right now, she’ll be happy if just 50 percent of participants can succeed. Likewise, Jones’ court has about a 45 percent success rate.

Like Pulaski County, Allen County’s family recovery court is still feeling its way through the problem-solving court process. Hartzler said as the program progresses, she’ll measure success by looking not only at graduation rates, but also at the rates of recidivism among her participants.

Looking statewide, Cleary said the plan is to use the success stories to encourage more counties to launch problem-solving courts. He noted some counties accept litigants from other counties to ensure the highest number of people possible can be reached.