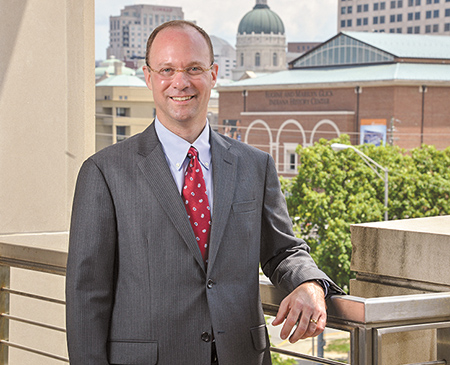 Andrew Klein did not want to talk about his legacy. He deflected the question about his successes and repeatedly pointed out he has another 14 months in the dean’s chair.

Yet, his decision to step down as the leader of the Indiana University Robert H. McKinney School of Law in June 2020 prompts a look back at his tenure and his place in history. At a time when the median tenure of a law school dean is 3.6 years, Klein will have served nearly double that at seven years when he leaves the dean’s office. He will also have been the second longest-serving dean in the past 60 years at IU McKinney.

Moreover, his term as the law school’s leader coincided with what he understated as a “rough patch in legal education.”

schools across the country were nosediving. Law firms were hiring fewer J.D. graduates, technology was taking over the jobs normally handled by associates, and freshly minted lawyers were struggling under heavy student loan debt.

The situation at IU McKinney corresponded to the national trend. Applications dropped, class sizes shrank and operating revenue declined. But Klein is credited with navigating the Indianapolis school to calmer waters and buoying its reputation.

Under Klein’s leadership, IU McKinney has been nationally recognized as among the best value law schools and one of the top five law schools in the Midwest for black law students, while its programs in legal writing and health care law are regularly ranked among the best in the country by U.S. News & World Report.

Also, the law school is close to meeting its $14 million fundraising goal as part of the Indiana University Bicentennial Campaign. The university-wide initiative, which is working to raise $3 billion, will conclude in June 2020, coinciding with IU’s 200th anniversary. Klein purposefully timed his departure from the dean’s office to coincide with the end of the campaign. 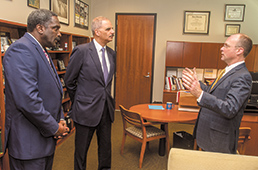 Klein is credited with instilling confidence and bringing optimism to the dean’s office. (Photos courtesy of IU McKinney School of Law) 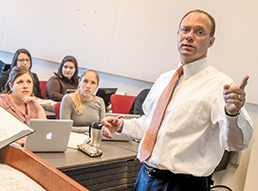 Once he retires, Klein plans to return to teaching full time at the Indianapolis law school.

“I love this law school,” Klein said. “I love this job and really I do think the campaign is great to see with the whole university working toward one goal.”

Asked about his accomplishments, Klein did not see any successes he was responsible for and instead credited the faculty and staff. They are doing the great things at the law school, he said, and all he did was try to get out of their way.

However, within the Indiana legal community, Klein and his leadership at IU McKinney drew high praise from Indiana Chief Justice Loretta Rush.

“The Indiana legal community is fortunate the IU McKinney School of Law has such a dedicated leader. Dean Andrew Klein is generous with his talents,” Rush said, noting the dean has supported and partnered with the Supreme Court on many initiatives, including the Study Commission on the Future of the Bar Exam and the Indiana Conference for Legal Education Opportunity (ICLEO).

“Dean Klein encourages his faculty and students to provide pro bono services, and he sends the Supreme Court their best and brightest to serve as law clerks,” Rush continued. “Students who are fortunate enough to have Professor Klein when he returns to the classroom will be well prepared for their future.”

A graduate of Emory University School of Law, Klein arrived at IU McKinney in 2000 from Samford University’s Cumberland School of Law in Alabama. He quickly moved into administrative positions, serving as the law school’s associate dean for academic affairs before taking on the campus-wide role as chief of staff to the Office of the Chancellor and associate vice chancellor for academic affairs at IUPUI.

When he returned to the law school in 2013 to become dean, legal education was already experiencing trouble.

The number of people nationwide applying to law school had plummeted to 59,426 by the fall of 2013, a 68 percent drop from the fall of 2010, according to data from the Law School Admissions Council. Graduates in the Class of 2013 had borrowed an average of $115,935 during law school and while 85 percent found employment, only 51 percent were working in private practice, as shown in research from Law School Transparency and the National Association for Law Placement.

As applications dropped at IU McKinney, the law school reduced the number of new 1L students it accepted. The school had a total enrollment across the day and evening programs of 930 students and 43 full-time faculty in the fall of 2013. Three years later, the school began the 2016-2017 academic year with 816 students and 38 full-time faculty.

At least 10 full-time tenure-track or clinical faculty have left, all through retirements and relocations, Klein said. Most recently, professor Carlton Waterhouse exited to start the Environmental Justice Center at Howard University School of Law.

Waterhouse, who joined the IU McKinney faculty in 2010, recalled the difficulty the law school faced in 2013.

The institution decided to accept fewer students because both nationally and locally the drop in applications came with a decline in LSAT scores and undergraduate grade point averages. IU McKinney tried to maintain its standards by not dipping too low into the applicant pool.

But the cut in matriculating students meant fewer tuition dollars, which placed a squeeze on the law school’s budget. While many were uncertain about the law school’s future, Klein, Waterhouse said, brought clarity, stability and hopefulness. The dean was very transparent, keeping the faculty informed about IU McKinney’s finances, and being consistent about sticking to his plan.

“He was a person, I think, people felt confidence in,” Waterhouse said. “He was very good for the school.”

‘Worked all the time’

The challenges are not over. IU McKinney has been contending with disappointing bar exam results as its graduates’ overall pass rate for the Indiana bar has fallen from 82.8 percent in 2013 to 69.3 percent in 2017, according to the American Bar Association.

Klein said the faculty takes the drop very seriously and the law school has “leaned in” to better prepare its graduates for the test. In particular, the school has started a bar preparation program and altered its core curriculum to align with the subjects tested on the bar. Also, it is offering financial counseling to help the students budget so they will be able to focus completely on studying for the bar between graduation and the July exam instead of having to work.

Serving as a leader in several student organizations at McKinney, 3L Eden Strange witnessed how Klein addressed problems and eased concerns. He described the dean as genuine, always open to hearing what students have to say, and caring greatly about the students and the law school.

Strange caught his first glimpse of the personal touch Klein brought to the dean’s office when during the 2016 orientation at IU McKinney, he introduced himself to the dean. Now looking forward to graduation and becoming a lawyer, Strange still sounded surprised and impressed recalling that Klein immediately knew his name, where he had earned his bachelor’s degree and the individual who had recommended him.

Outside the law school, the Indiana legal profession is taking a collective breath of relief to see IU McKinney weather the storm and continue to produce “great lawyers,” said Paul Kruse, president of the IU McKinney Alumni Association board of directors. Kruse credited Klein with instilling renewed optimism and raising awareness around Indiana of all that IU McKinney graduates have done in law firms, state and local governments, and in the business world.

More importantly, Klein engaged the alumni of the law school. Kruse noted the dean interacted regularly with the alums by making them feel remembered, wanted and needed, sought their input, and listened to their concerns. The alumni have responded, according to Kruse, by making larger financial contributions.

“His legacy will be he couldn’t have put any more time and effort into the position of being dean,” Kruse said of Klein. “He just worked all the time.”•