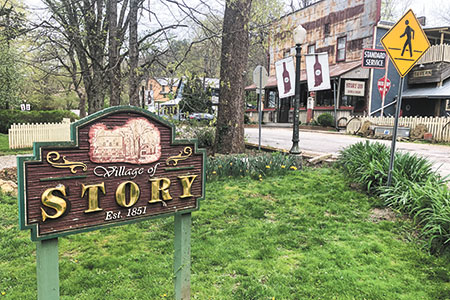 The smell of freshly cut grass fills the air as a lawn mower hums in the distance. Beneath a covered footbridge, a babbling brook flows. And back near the woods, leaves rustle as squirrels scamper up and down trees.

These are the sounds of springtime in Story, a 17.4-acre hamlet nestled in the hills of southern Brown County, Indiana. It’s a soundscape a world away from the ringing phones, typing fingers and carrying voices of a law office.

Rick Hofstetter has lived both lives. He’s been an attorney, handling business clients and working on the team that took Conseco public. But he’s also devoted the last 20 years of his life to Story, buying the town at a sheriff’s sale in 1999 and dedicating the two decades since to restoring and preserving the historic community. 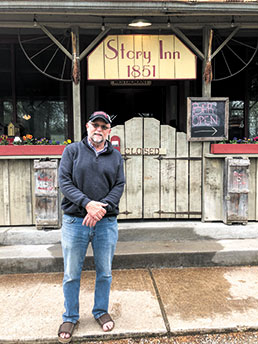 Attorney Rick Hofstetter is selling the town of Story, Indiana for $3.8 million. Hofstetter bought the Brown County town in 1999 and has spent the last two decades running an inn and restaurant on the property.

Hofstetter knows just about everything about his adopted hometown. As he walks down the gravel paths and through the grassy fields, he shares the story of each cottage that’s open to overnight guests, each garden that feeds restaurant patrons at the Story Inn, and each barn that serves a different function.

But after 20 years, it’s time to let another author put their name on Story. Hofstetter has listed the town for sale, asking $3.8 million for the community that was recently added to the National Register of Historic Places.

Hofstetter isn’t going anywhere, as he plans to continue running the Story Inn as a lessee-tenant. But after 20 years, the attorney-turned-businessman is cognizant of the fact that even if he’s not around 100 years from now, Story very well could be.

A time gone by

Story’s catchphrase gets to the heart of the community: “One inconvenient location since 1851.” Indeed, the town sits about 15 minutes back from State Road 46, the main highway that leads visitors into the heart of the tourist destination of Nashville, Indiana.

Once you wind your way through the backroads, you’re greeted by a sign welcoming you to the Village of Story and the sight of cottages that look as though they belong on a Hollywood set. The largest feature of the town is the Story Inn, a repurposed general store that now houses a restaurant, a full-service kitchen, a tavern and guest rooms.

Shelves of the main dining room are filled with 19th century medicines, including an arsenic-based concotion intended to kill the worms living inside a person, but not the person themselves. The historic remedies were found in the attic of the general store, Hofstetter said, and now he displays them to remind his visitors of a time gone by.

Walk out the back door of the restaurant and you’ll enter one of Story’s gardens, where plants raised for food and for beauty grow side-by-side. Cross the field and you’ll come upon an 19th century barn, repurposed to now host weddings, receptions and similar events.

Of course, Story is surrounded on nearly all sides by trees and runs adjacent to the property line of the Brown County State Park. Photos from a century ago show nothing but open land behind the general store, but those lands are now overgrown with towering trunks. As Hofstetter recalls this, he marvels at nature’s ability to recreate itself.

And then there are the guestrooms, comprised of small cottages once occupied by residents of Story. Altogether, there are 14 rooms available in Story, each decorated with either original and/or historically accurate bedding, wallpaper and furniture. But you won’t find a television in any guestroom — the only TV in the whole place is found in the basement tavern.

Of course, the rooms come equipped with running water and electricity — features that seem basic now but were marvels in Story not that long ago. To Hofstetter, 21st century amenities are all part of drawing visitors to the 19th century inn.

“Would you want to stay somewhere without running water, or without the internet? No.”

A businessman and a lawyer

Hofstetter’s awareness of the 21st century features his guests want while temporarily living a 19th century life is indicative of his business acumen. As he walks the property, the attorney discusses the various events the town hosts and how those events fit into the town’s overall business plan.

One of the largest events Story hosts is the Indiana Wine Fair, scheduled this year for May 11. Already the town’s lamp posts display banners advertising the festival, which brings in thousands each year.

Weddings are another big money-maker for Story, as is the restaurant and tavern. The wine list is award-winning, and the restaurant recently hired a New York chef who has worked in a Michelin-star restaurant.

Hofstetter’s legal experience is also evident as he discusses his business model. He easily explains the complexities of Indiana’s liquor laws, which underscore most of Story’s attractions, and points out how the town is designed around them.

Different parts of the property require different alcohol licenses, and some the licensing areas are cleverly delineated by rustic picket fences. Certain alcohol can be served on one side of the fence, while a different kind is served on the other — cross the line and Story could find itself liable for a fine.

As he’s navigated these and other regulatory laws over the last two decades, Hofstetter concedes that his legal expertise has come in handy.

Preparing for the future

Ever the businessman, Hofstetter knows he can’t be in charge of Story forever. The town has existed for about 150 years so far, and it may have another 150 left.

That’s why he’s decided to sell the property, though he noted the actual town of Story and the business operating on it are two different things. He’s keeping the inn but selling the town, and the lawyer in him knows those two concepts need to be explicitly defined.

“If someone wanted to buy it today, I wouldn’t do it unless we had reached an agreement that includes restrictive covenants,” he said.

As they look to the future, Story Inn staff members are optimistic. Jacob and Kate Ebel, who run the inn, are looking to expand its reach. Kate wants to bring in a younger demographic, possibly giving tours to children, while Jacob’s goal is for Story to stand out as a premier destination for food and drink lovers.

As the person in charge of digitally marketing the analog town, Britani Ham hopes Story might get a few cosmetic updates. That’s the whole point of the sale, she and Hofstetter said — to find someone with the funds necessary for upkeep.

Hofstetter’s decision to sell is driven by his focus on the future, but as he looks over the past 20 years, he admits it’s bittersweet to walk away from being an owner. But he’s not walking away from Story completely, nor is his life changing dramatically. He’s still going to run the inn, and he’s still going to teach law-related topics in Indiana University’s School of Public and Environmental Affairs.

The main difference, he said, is that a plan for the future of the centuries-old hamlet will be put into place.

“We now want to ensure the town’s continued survival with an orderly transition into safe hands,” he said.•

The Associated Press contributed to this report.