State officials have closed trails at some of Indiana’s most popular state parks and campgrounds in response to large crowds gathering outdoors disregarding social distancing during the coronavirus pandemic.

The Indiana Court of Appeals on Friday affirmed on interlocutory appeal a trial court’s decision that it has the legal authority to address the merits of an Indiana Trial Rule 60(B) claim in a dispute over a dock location between Brown County lakefront property owners.

Déjà vu retained its grip on the winner’s circle after three days of competition at the 2019 Indiana We the People State Finals, which brought nearly 600 middle and high school students to Indianapolis Dec. 8-10. 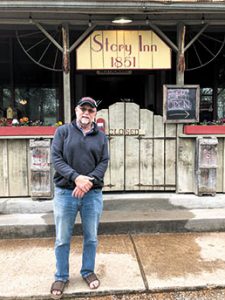 Richard “Rick” Hofstetter, the lawyer-turned-businessman who operated the popular Story Inn in southern Brown County, died Oct. 1. He was 63.

Two attempted murder convictions entered in a Brown County court will stand after the Indiana Court of Appeals agreed with a trial court that the offender did not provide a “fair and just reason” to withdraw his guilty pleas. 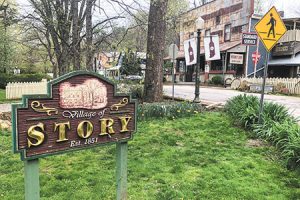 Attorney Rick Hofstetter has devoted the last 20 years of his life to the bucolic Brown County hamlet of Story, restoring and preserving the historic community after buying it at a sheriff's sale. Now he says it's time for the town to become someone else's Story.

Lawyer who owns town of Story lists it for $3.8 million

A rustic southern Indiana town that was established in 1851 and is listed on the National Register of Historic Places is up for sale. Its attorney owner has set an asking price of $3.8 million.

The Indiana Supreme Court on Thursday ordered a public reprimand of an Evansville attorney and accepted the resignation of a Brown County attorney who was facing multiple professional misconduct and trust account violations.

Southern Indiana voters rejected one trial court judge and narrowly re-elected another who was challenged by a former colleague who changed parties to run against her. Jefferson Circuit Court Judge Darrell Maurice Auxier, a Democrat, was the lone sitting Indiana trial court judge to lose his bid for re-election, while Clark Circuit Judge Vicki Carmichael retained her bench seat in one of Indiana’s closest countywide trial court races Tuesday.

A man serving an 80-year prison sentence for the 2015 rape and murder of an Indiana University student has pleaded guilty to the rape of an IU law student three years earlier.

An Indiana lawmaker plans to reintroduce legislation to protect the state’s forests after seeing the outcome of a timber cut that removed more than 1,700 trees.

Courts in two more counties will make the switch to electronic filing this week, moving Indiana closer to the judiciary’s goal of statewide e-filing implementation by the end of the year.

Indiana Attorney General Curtis Hill is encouraging consumers to contact his office if they have been penalized for posting truthful, negative reviews of businesses online, advice that comes on the heels of national backlash against a Brown County inn that charged a customer for posting a negative review.

A judge has found a man not guilty by reason of insanity in a hatchet attack against a high school exchange student from China.

The Indiana Court of Appeals declined to revise the 80-year sentence handed down by a Brown County judge for the murder of an Indiana University student two years ago.

A Brown County man whose license to service and install septic systems was revoked without notice or a hearing may proceed with his federal lawsuit against the county.

A jury found a man guilty of murder Wednesday in the beating death of an Indiana University student two weeks before she was due to graduate.

Jurors have started deliberations in the trial of a man accused of killing an Indiana University student last year.

A man accused of killing an Indiana University student is the victim of a botched police investigation, his attorney told jurors on Tuesday, but prosecutors noted that the victim's blood and hair were found in his vehicle.