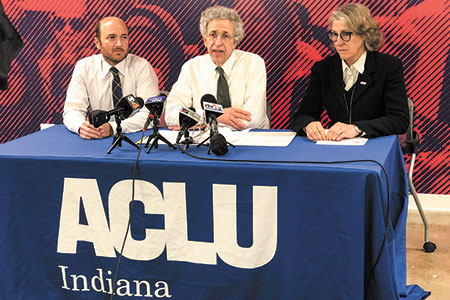 The ACLU of Indiana and ACLU National on April 25 filed the case of Caitlin Bernard, M.D.; Katherine McHugh, M.D. v. The Individual Members of the Indiana Medical Licensing Board; The Marion County Prosecutor, 1:19-cv-1660, in the U.S. District Court for the Southern District of Indiana. The case takes aim at House Enrolled Act 1211, which was signed into law by Republican Gov. Eric Holcomb on April 24.

Under HEA 1211, which is scheduled to take effect July 1, physicians would be prohibited from performing dilation and evaucation abortions unless they are medically necessary to prevent serious risk or death to the mother. The law terms the procedure as “dismemberment abortion,” “with the purpose of killing a living fetus in which the living fetus is extracted one (1) piece at a time from the uterus through clamps, grasping forceps, tongs, scissors, or another similar instrument that, through the convergence of two (2) rigid levers, slices, crushes, or grasps a portion of the fetus’s body to cut or rip it off.”

The term does not, however, include “an abortion that uses suction to dismember a fetus by sucking fetal parts into a collection container.”

The problem with that law, according to the ACLU, is that the prohibition on dismemberment abortions — which comes with the threat of a Level 5 felony charge — interferes with the most commonly used method for second trimester abortions: the dilation and evacuation procedure, which is performed pre-viability.

“In the D&E procedure, after the cervix is softened and dilated, the physician uses suction to remove amniotic fluid and the placenta and forceps or another surgical instrument to remove the fetus,” the complaint reads. “Usually, because the cervical opening is narrower than the fetus, some disarticulation or separation of fetal tissue will occur.”

The alternative procedure for a post-15-week abortion is an induction abortion whereby labor is induced and a woman delivers a nonviable fetus. In addition to taking longer than a D&E procedure, the complaint alleges induction abortions are more expensive and carry greater medical risks for the mother.

In order to comply with HEA 1211, the complaint says physicians could only perform D&E procedures if they first cause fetal demise. But there is little research into fetal demise methods, the plaintiffs argue, and causing fetal demise creates a risk of injury and pain to patients.

The plaintiffs — Drs. Caitlin Bernard and Katherine McHugh, both of whom practice medicine in Marion County — say their professional ethics prohibit them from causing fetal demise because “they have an ethical obligation not to subject their patients to potentially harmful procedures that provide no medical benefit.” Further, because there is only one other doctor besides the plaintiffs who regularly performs second-trimester pre-viability abortions, and because none of those doctors perform fetal demise methods, “plaintiffs believe that patients will be prevented from obtaining abortions as they will not be able to obtain physicians to perform fetal-demise procedures in place of the D&E procedures currently being performed.”

“Moreover, the Enrolled Act places them in an impossible situation, as they are unable to know before beginning the fetal-demise procedures whether fetal demise will occur,” ACLU attorneys Ken Falk, Gavin Rose and Andrew Beck wrote in the complaint. “If it does not, they may not be able to complete the abortion without violating the Enrolled Act.

“Because a physician cannot initiate a medical procedure without knowing that she has the capacity to see it through to completion, and because of the unreliability of fetal-demise procedures,” the complaint says, “the Act will deter physicians from performing D&E abortions.”

The complaint seeks injunctive and declaratory relief, as well as costs and attorney fees, for violations of the plaintiffs’ due process rights under the 14th Amendment. It also alleges violations of women’s rights to bodily integrity.

“I don’t think men would tolerate that sort of intrusion on their rights to bodily integrity,” Falk told reporters on April 25, “nor do I think that since we’re talking about abortion, somehow that gives people special rights to invade the privacy rights of women.”

The case has been assigned to Senior Judge Sarah Evans Barker, and Falk, the ACLU of Indiana’s legal director, said his team plans to file a request for an injunction soon.

In a statement to Indiana Lawyer, Indiana Attorney General Curtis Hill, whose office will defend the state against the ACLU’s lawsuit, vowed to “mount a vigorous defense.”

“The Indiana General Assembly passed a reasonable law designed to respect fetal life while also safeguarding women’s health,” Hill said in the statement. “Almost before the ink has dried on the governor’s signature, the ACLU is challenging this law’s constitutionality.”

Both the Marion County Prosecutor’s Office and Rep. Peggy Mayfield, the Martinsville Republican who authored HEA 1211, declined to comment on the pending litigation.

Speaking to reporters alongside Falk and Rose, ACLU of Indiana executive director Jane Henegar said she was disappointed lawmakers relied on what she called “misinformation” to advance thelegislation. She pointed to lawmaker comments asserting the bill would save fetal pain, an assertion Henegar said has been disproven by medical science.

“And even the way that this procedure is described in the legislation is a clear intention of inflaming people’s views of these procedures when, as Ken has stated, it’s a common and safe procedure,” Henegar said, referencing the definition of “dismemberment abortion” in HEA 1211.

The April 25 filing is just one of a growing list of ACLU lawsuits brought against Indiana abortion laws. One of the most frequently litigated bills is the 2016 version of House Enrolled Act 1337, signed into law by then-Gov. Mike Pence.

Multiple provisions of HEA 1337 have been challenged and struck down by federal courts. Among those provisions is one that would require aborted or miscarried fetal remains to be buried or cremated, and one banning abortions based on a fetus’ gender, race or disability.

The federal case challenging those provisions, Box, et al. v. Planned Parenthood of Indiana and Kentucky, Inc., et al., 18-483, has been distributed for conference among the justices of the U.S. Supreme Court roughly a dozen times, but so far a decision on whether to grant cert has not been announced. Some Supreme Court watchers believe the delay could mean a fiery dissent from the denial of cert might be in the works.

Falk called the pattern of the ACLU filing lawsuits against Indiana abortion-related legislation an “annual ritual.” He said laws similar to HEA 1211 have been struck down by courts in eight other states.

“I think the strategy throughout the United States is to pass as many laws as possible regardless of whether they are in fact constitutional and hope that they are taken up and the current legal terrain changes,” Falk said. “But of course, all of us operating out here in the trenches deal with the law as it is now, and as the law is now, these cases have uniformly been found to be unconstitutional, as well they should be. This is outrageous.”•