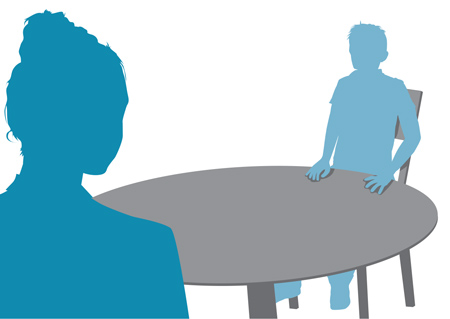 Nick Philbeck has witnessed repeatedly how the anger crime victims can feel will melt when they sit across the table and see the offender is a 15-year-old kid.

Many of the offenders are juveniles who have been referred to the program as a condition of their involvement with the justice system. Philbeck acknowledged the consequences can vary. Sometimes the juvenile might get an informal adjustment or probation for meeting the victim, but other times the offender might not receive any penalty for failing to participate.

Even so, the senior mediator champions the process. He has seen the “humanizing element” as victims and offenders meet face-to-face and begin talking, as well as listening, to each other.

A study published in May 2017 by the Department of Criminology, Law and Society at George Mason University supported Philbeck’s perception, finding juvenile offenders and their victims viewed restorative justice favorably. However, actual outcomes were found to be mixed.

For the offending juveniles, the study concluded restorative justice programs moderately reduced their delinquent behavior compared to young adults who had been processed through the traditional juvenile justice system. For victims, the evidence is strong that the programs are effective. In particular, they perceived being more willing to forgive the offender and likelier to feel the outcome was just.

Giving a voice to survivors

Irwin Larrier, executive director of the Center for Community Justice in Elkhart, gave a robust, “Absolutely!” when asked if restorative justice works.

Elkhart County, according to Larrier, was the first in the country to establish a victim-offender reconciliation program. For about 40 years, the program has brought victims, or survivors, of crime together with, as he called them, “those who caused the harm.”

The focus is on the survivors, giving them the opportunity to tell the offender how the harm impacted them, allowing them to ask why, and possibly regaining a sense of safety. Individuals who committed the crime are engaged, so they can take responsibility for their actions and perhaps change their perceptions of the people they have harmed.

Like Philbeck, Larrier said seeing the other person as a human being is critical. Humanizing can flow downstream and enhance the wellbeing of the overall community by encouraging people to build positive relationships even with those who are not part of their normal social circles.

David Liebel, director of religious services for the Indiana Department of Correction, takes a more tempered view of restorative justice programs. He sees the potential for mental health and spiritual benefits but noted if the program is not done properly, the victim can be retraumatized.

“We see the value in victim-offender mediation as a way to restore relationships,” Liebel said, “but we also see it has to be done well.”

Key to a successful program would be ensuring the resources are available and the mediators are well trained to not only work with the victims but also ascertain the motives of the offender. Sometimes, he said, offenders push for a reconciliation session solely as a way to put themselves in a better light so they might get early release or appear remorseful to the judge.

Offenders can benefit by acknowledging what they have done wrong and sincerely apologizing. Leibel said over time, many people come to realize they have harmed others and they want to make amends.

Still, the focus of any mediation session should be on the victim, Liebel said. They should have the ability to say how the crime changed their life and ask the offender questions. From this, they could gain some peace of mind.

But if the mediation is forced or the victim is not prepared, more harm can result. Old wounds can be reopened, and anger and grief can return.

As in a civil dispute, these mediators will take a seat at the same table as the victim and offender then guide the conversation between the two. A key difference with mediation in a criminal context is that fault has been found and blame has been assigned, Philbeck explained. One person has caused harm and the other person has experienced that harm.

Consequently, the goal can be more elusive than in a civil mediation, where the parties may be trying to divide assets or work out a parenting time schedule. Sometimes in a restorative justice session, the goal is to reach an agreement for restitution while other times, Philbeck said, the sessions come to a natural end when each side feels they have gotten what they need.

Once the victim and offender are face to face, Philbeck starts the session by allowing each to speak without being interrupted.

Victims can detail the harm they have experienced and the worries they carry since, he said. They can find out the offenders’ motives and get some relief by learning they were not purposefully targeted. Also, the victim might come to realize the bad kid they saw at the beginning of the session really has some good qualities, while the offenders might understand the harm their actions caused but take comfort in knowing the victims do not see them as unredeemable.

All the time, Philbeck is guiding the conversation, occasionally checking in to make sure the parties are engaged and asking what they think about what they are hearing. Mostly, he just wants the individuals to interact.

“I want an open dialogue,” Philbeck said. “Ideally, I want to get the parties talking with each other.”•