Writing on a matter of “great public importance,” the Indiana Supreme Court addressed the rights of the mentally ill.

The court’s unanimous opinion did not change anything about civil commitment laws or the rights of respondents in Indiana. Instead, it explicitly disapproved of Marion Superior Judge Steven Eichholtz’s practice of summarily approving commitment orders reviewed by the commissioner.

Even though the decision was merely procedural, mental health experts say the court’s opinion highlights the importance of safeguarding legal rights for mental health commitment respondents. Laws concerning those rights have been shifting in recent years, experts say, with more changes likely still to come.

When John Snook, executive director of the Virginia-based Treatment Advocacy Center, reviewed the Indiana Supreme Court’s opinion in the T.W. and A.W. cases, the procedure-specific issue reminded him of a prominent feature in American mental health treatment.

“One of the things we point out is that we’re basically running 50 experiments on how to provide mental health care,” Snook said. “Every state’s laws are different, every state uses a different process and every state has sort of decided on a different way of getting from Point A to Point B.”

Indeed, TAC’s “Grading the States” report gives seven states an A or A- for their inpatient and outpatient mental health treatment, while also giving eight states and Washington, D.C., an F. 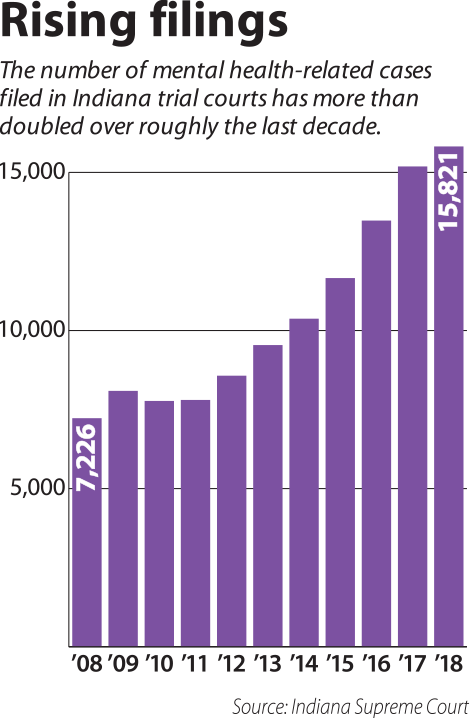 “As a result,” the report says, “whether or not an individual receives timely, appropriate treatment for an acute psychiatric crisis or chronic psychiatric disease is almost entirely dependent on what state he or she is in when the crisis arises.”

Indiana ranks relatively high in the grade report as one of five states earning a B+. The report is based on various factors concerning court access, community services and commitment lengths, among others.

Snook said there are common mental health reforms happening across multiple states — namely, updates to treatment laws drafted in the 1970s. During that decade, a series of court cases focused on a person’s “dangerousness.” The deciding factor for commitment, Snook said, was often whether a person was in “imminent danger.”

The problem with that, Snook said, is that science has shown that trying to predict “dangerousness” is largely a coin toss.

“Most people with mental illness are not violent and not dangerous, so having that standard for whether or not treatment is necessary is really not either scientifically valid or helpful for anyone involved,” he said.

Instead, many states have moved toward a standard of “gravely disabled,” said Jennifer Mathis, deputy legal director of the Bazelon Center for Mental Health Law in Washington, D.C. Indiana’s commitment laws include a gravely disabled standard, defining the term as “a condition in which an individual, as a result of mental illness, is in danger of coming to harm because the individual: (1) is unable to provide for that individual’s food, clothing, shelter, or other essential human needs; or (2) has a substantial impairment or an obvious deterioration of that individual’s judgment, reasoning, or behavior that results in the individual’s inability to function independently.”

The shift to a gravely disabled standard came about partially because of the United States Supreme Court’s decision O’Connor v. Donaldson, 422 U.S. 563 (1975), in which the court held that a person cannot be kept in a treatment facility just because they have a mental illness. Instead, Mathis said, the person must present a danger to themselves or others.

Over the years, that standard of “danger” — which is still present in many state statutes, including Indiana — progressed to allow for commitment when physical danger is absent but other danger, such as impaired judgment, is present. Marianne Halbert, criminal justice director for the Indiana affiliate of the National Alliance on Mental Illness, said the gravely disabled standard enables law enforcement to detain someone whose mental illness might put them in harm’s way, even if that person is not at immediate risk.

Though commitment laws are largely state specific, certain rights are nationally recognized for mental health respondents. Such rights include the right to an attorney and the right to present and cross-examine witnesses, Halbert said.

Those rights are born from the fact that liberty interests are at stake during commitment proceedings, Halbert said. In addition to possibly being involuntarily held at a treatment facility, mental health respondents could also be forced to take medications against their will, she said.

“That’s why those rights are so important,” Halbert said. “It’s freedom not only of movement.”

Under the Obama administration, the federal government became more involved in tracking commitment laws statewide, particularly after the Sandy Hook shooting, Snook said. One of President Barack Obama’s last moves in office was to create the first assistant secretary for mental health and substance use disorders, a position currently held by Dr. Elinore F. McCance-Katz.

In her role, McCance-Katz has released publications and guidance on the science behind mental illnesses and treatments, Snook said. She’s also reviewed state laws and provided input on which laws are working.

Before McCance-Katz’s appointment, the Obama Department of Justice in 2009 began intentionally enforcing the mandates of Olmstead v. L.C., 527 U.S. 581 (1999), which requires that mental health patients be placed in “integrated settings.” In practice, Mathis said the Olmstead decision means mental health patients should be given access to community-based care when a patient requests such care and it is medically appropriate.

While the common concern in the mental health setting is the need for more beds at treatment facilities, Mathis said she would like to see advocates focus their efforts on providing greater access to community-based care. If such care were available, she said, then patients who otherwise would need a hospital bed might pre-emptively receive the care they need to keep them out of in-patient treatment.

Snook also hopes to see future movement on how people with mental illnesses are treated after being arrested because of their illnesses. There are states where health departments have been threatened with contempt of court because mentally ill arrestees sit in jail while waiting for a hospital bed, he said.

In Indiana, Halbert said NAMI Indiana is not actively advocating for major changes to mental health laws at the moment, though in recent years the organization focused its efforts on obtaining a death penalty exemption for people with mental illnesses and developmental disabilities. So far, such legislation has not passed in Indiana.

Though there are no specific changes currently on the horizon in Indiana, the experts say mental health law remains fluid.

“We’ve seen almost every state make updates to the process to sort of ensure care is provided in a more effective and person-oriented manner,” Snook said.•