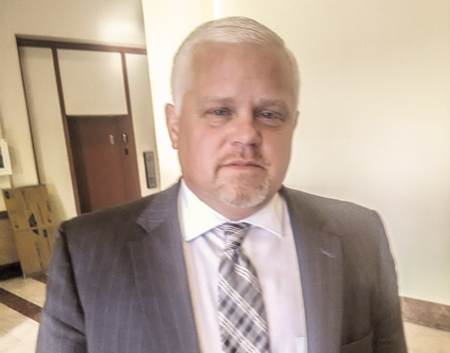 The prosecutor — who admitted to wrongdoing — is still in his elected office after he allegedly battered and confined his fiancée, to the dismay of some in the county south of Indianapolis.

The case began to unfold just three minutes before midnight on March 4, when the Johnson County Sheriff’s Department responded to a call of a woman who had fled a Trafalgar home and banged on a neighbor’s door asking for help. Deputies noted the woman’s right eye was swollen and bruised, according to an incident report provided by Indiana State Police, and she was transported to a local hospital for her injuries.

The woman informed law enforcement that she had been battered and confined by Cooper, who she said also sent messages through her Facebook account without permission, pretending to be her.

But upon learning that the allegations were lodged against an elected official, the sheriff’s department requested that ISP assume the investigation. Cooper ultimately pleaded guilty on April 15 to criminal confinement, identity deception and official misconduct, all as Level 6 felonies, as well as Class A misdemeanor domestic battery. 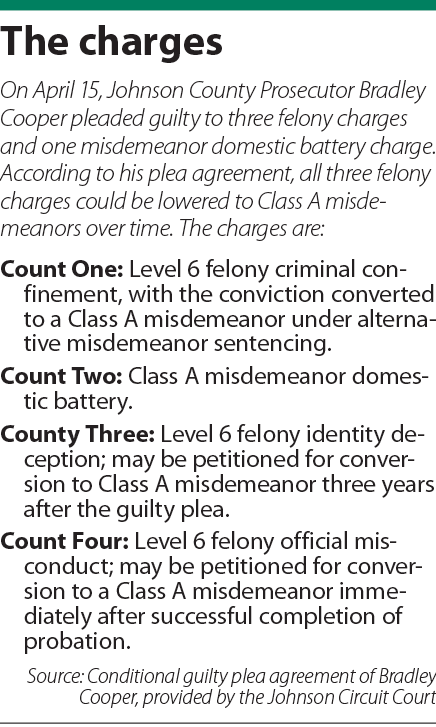 As part of his agreement, Cooper acknowledged that he would be removed from office as an elected official pursuant to Indiana Code 5-8-1-38(b) for pleading guilty to a felony. He received no jail time, however, and is instead set to serve 540 days of supervised probation if the judge accepts the plea agreement, which is currently under advisement, Brown said.

“If nothing else changes, the vacancy would occur at that time and we would have 30 days to hold the meeting,” Boyce said of the caucus. The final decision will be ultimately made by the chairman, vice president, secretary and treasurer, Boyce said.

Neither Cooper nor his attorney, Stephen Andrew Oliver of Boren, Oliver & Coffey LLP, responded to requests for comment.

In the interim between Cooper’s foreseeable leave of office and the caucus’ potential appointment of a successor, state law stipulates that chief deputy Joseph Villanueva would assume the prosecutor’s role.

But until the judge decides to accept or reject the plea agreement during a sentencing hearing scheduled for July 17, Cooper will remain in his elected office. As of now, he’s still the prosecutor, the Johnson County Prosecutor’s office confirmed to Indiana Lawyer.

That angers some community members, including Whiteland pastor Mark Powell, who says the situation “stinks to high heaven.” Cooper’s current presence in the prosecutor’s office is causing concern for some locals, Powell said.

“They’re frightened about it too. This guy’s still in office and he could still prosecute somebody,” Powell said. “You have an entire community of people that just want to keep their mouths shut and their heads low.” 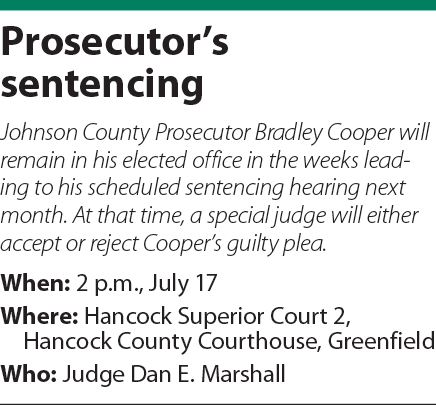 As a pastor, Powell expects others to have a concern for equal justice. While few people have spoken out about the case, Powell said he won’t keep silent.

“If you have the sheriff and all the judges that have recused themselves that are all Republican, and you have a criminal, currently and until July 17 at least, that is the prosecutor, who wants to say a peep about that?” he said.

Domestic violence survivor and Franklin resident Patti Doan agreed, noting that the community is afraid of the potential repercussions they could face for speaking out about Cooper’s case.

“The police can bully you in this town,” Doan said. “This county is very corrupt. It’s not a big secret.”

Doan said she thinks it’s unfair that Cooper wasn’t arrested the night of the events to which he pleaded guilty.

“It’s a slap in the face of every victim,” Doan said. “I think he should be punished more because he knew better. He was the one in judgment of all these offenders, and now he’s getting a slap on the wrist.”

“He definitely shouldn’t be in judgment of those … doing the same offenses, or even worse,” she added.

The Johnson County Prosecutor’s Office declined to say whether Cooper has continued to practice and perform the duties of his office while awaiting sentencing.

Kerry Hyatt Bennett, Legal Counsel for the Indiana Coalition Against Domestic Violence, said it seems clear that privilege played a role in how Cooper’s case was handled.

“When it comes to access to justice, there should not be special rules for special people — in any case,” Bennett said. “But in domestic violence cases, it is unconscionable when a convicted domestic abuser can continue to use what power he or she has to sidestep the transparency and accountability that the system mandates.”

Rules are in place for reason, she added. Bennett said she hopes that during Cooper’s sentencing hearing it will be clear that those rules apply to all.

Pursuant to the provisions in his plea agreement, Cooper could have all three of his Level 6 felony charges reduced to Class A misdemeanors. The Level 6 felony criminal confinement charge could be lowered under alternative misdemeanor sentencing pursuant to I.C. 35-42-3-3(a).

Likewise, Cooper could petition to have his identity deception charge converted to a Class A misdemeanor under I.C. 35-50-2-7(d) three years after his guilty plea, or have his official misconduct charge lowered immediately upon completion of probation pursuant to I.C. 35-50-2-7(c).

“Persons convicted of a felony are not eligible to run for state and local office,” said Dale Simmons, co-general counsel for the Indiana Election Division. “… If a felony is subsequently reduced to a misdemeanor under the criminal code, the person is still ineligible.”•