On July 15, the federal government began giving parents advancements on their 2021 Child Tax Credit. The checks, which will be issued each month from now until the end of the year and could total up to $300 for each child, are being hailed as helping to provide an economic boost that could lift millions out of poverty.

However, for some divorced parents, the advance is causing confusion and fueling conflicts about who is entitled to the money. Family law attorneys have been getting questions from their clients and have been talking among themselves about how to divvy up the funds that are arriving ahead of next year’s tax season.

Camden, a founding partner of Camden & Meridew P.C. in Fishers, repeatedly used the word “mess” to describe the situation and, when asked if the parties would be able to work out the details themselves, responded with peals of ironic delight.

“Haven’t you dealt with family law clients before?” she replied. “They want to fight about it.”

Looking ahead to the next six months as the advance payments are doled out, Camden and Indianapolis solo practitioner Travis Van Winkle said they are anticipating the difficulties will continue. They outlined numerous scenarios that could result in a parent who is not entitled to the payments getting the checks anyway — which, in turn, will likely lead to more arguments and the need for more mediation.

Little guidance is available from the IRS, and no caselaw is on point. Both attorneys mused about the Indiana Supreme Court issuing an order that would provide a formula for handling these disputes but also acknowledged the cases are so individualized, creating a decree that would apply to all or a majority of cases would likely be unachievable.

“I think the parties are making it a bigger deal than they really should be,” Van Winkle said. He added that some divorced adults divvy up the money while other “parents need to fight over it just because they want to fight about things.” 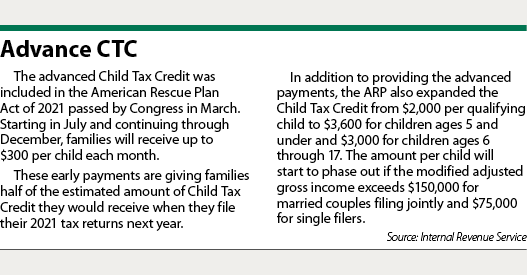 Who gets the money?

The Advance Child Tax Credit was part of the American Rescue Plan Act of 2021, which President Joe Biden signed in March. Not only did the new law push out early some of the money parents would have otherwise received in one lump sum after they file their tax returns next spring, it also increased the credit to $3,000 for each child in the household between 6 and 17 years of age and $3,600 for each child under 6.

Columbia University’s Center on Poverty and Social Policy has described the expansion of the Child Tax Credit as the most significant program “to alleviate poverty since the creation of Medicare and Medicaid in 1965.” By the center’s estimates, the direct cash payments from the credit could help slash child poverty in half this year.

But first, the money has to get to the right parent.

More head-scratching could come for parents who filed a joint return as a married couple in 2021 but have since divorced, or if the parent claiming the child got a significant pay raise this year that could possibly make him or her ineligible for the highest amounts.

Also, a potentially problematic situation is tied to child support. Parents who are paying child support in arrears will not be entitled to the advance payment if claimed on their tax returns. But arrearages are calculated at the end of the calendar year, so the Child Tax Credit checks could be flowing into the ineligible parent’s bank account for six months and possibly already spent before the mistake is discovered.

Since the advanced payments are scheduled to end this year, Camden and Van Winkle said they do not expect the consternation to have any lasting impact on family law. Also, neither anticipate any scuffles over the advance payments to even get to the Indiana Court of Appeals. Litigation costs money and, as the lawyers are explaining to their clients, going to court could eat up half of the disputed dollars in attorney fees and court costs.

Still, tax checks are igniting more fights between divorced and separated parents in a year when Camden and Van Winkle said the level of acrimony and “crazy” situations is unlike anything they have seen in their years of practicing family law.

Camden said she is not convinced the advanced payments will alleviate poverty at the levels predicted. She did some back-of-a-napkin calculations and speculated the deposits could be too small to be noticed by some recipients.

“I don’t think it’s going to bring people out of poverty,” she said, adding that the money is not an unexpected windfall but rather is a tax credit that is simply arriving six months early.

“I don’t think it’s a big enough amount that it’s going to pull people out of poverty,” Camden continued.

Even so, Van Winkle said he sees the potential for the funds to ease some of the burdens on families and perhaps divert a few couples from getting a divorce.

“I think it’s certainly possible, especially in divorces where money is driving the wedge between the parents,” he said, although he noted the couple could shift from arguing over lack of money to fighting about how to spend the advance payments they are receiving.

Still, he continued, the payments have the potential to benefit families, especially those with multiple children.

“I think it could certainly ease the tensions enough to bring families together,” he said.•