Home » Bell and Grass: 3 things to know about speaking with represented people 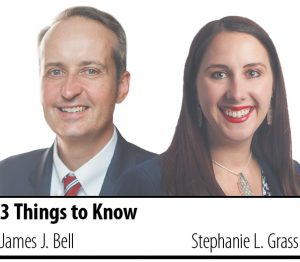 Can a criminal defense attorney depose the victim in a domestic violence incident without getting the consent of the victim’s divorce lawyer? Can a family law attorney depose the opposing party about a personal injury lawsuit without the personal injury lawyer’s consent? That depends on what those lawyers want to ask about and whether they have the witness’s counsel’s consent.

Rule 4.2 of the Indiana Rules of Professional Conduct provides that “a lawyer shall not communicate about the subject of the representation with a person the lawyer knows to be represented by another lawyer in the matter, unless the lawyer has the consent of the other lawyer or is authorized by law or a court order.” (Emphasis added.) In a recent disciplinary opinion, the Indiana Supreme Court gave guidance on what constitutes a “matter” and what conduct violates this rule. In re P.M., 166 N.E.3d 345 (Ind. 2021). Here are three things to know about speaking with a represented person.

The court found that this violated Rule 4.2 and noted that “all three underlying cases involved overlapping subject matter, and Second Wife was a party to the other two cases.” Id. The court rejected respondent’s argument that the “matter” referenced in Rule 4.2 should be read narrowly to mean only the specific lawsuit in which the deposition was taken. In doing so, the court stated:

Based on P.M., it is clear that, regardless of what cause number a deposition is being conducted under, if you know a witness is represented on the subject matter you wish to discuss, you should obtain the consent of the witness’s counsel prior to communicating with the witness. Going back to our examples above, if the criminal defense lawyer believes that the victim’s divorce impacts the victim’s credibility in the criminal case or if the family lawyer thinks a personal injury matter impacts the property settlement in a divorce, then the lawyer who wants to take the depositions needs to obtain consent from the family lawyer and the personal injury lawyer.

2. Your client can talk to a represented person — but be careful

Parties are, of course, permitted to speak directly to each other. What can a lawyer’s role be in this situation?

Comment 4 to Rule 4.2 provides in pertinent part, “[p]arties to a matter may communicate directly with each other, and a lawyer is not prohibited from advising a client concerning a communication that the client is legally entitled to make.” However, be careful. There are limits to what role you can take on when you are “advising” in this fashion. Comment 4 also states that a “lawyer may not make a communication prohibited by this Rule through the acts of another.” Where does the “adviser role” end and unethical communications “through the acts of another” begin?

One lawyer received a private reprimand for violating Rule 4.2 by giving his client (the witness’s employer) an affidavit that the attorney wanted a witness (the client’s employee) to sign in support of his client’s motion. Here’s the catch: The witness was represented by counsel on the subject matter of the affidavit. In re Anonymous, 819 N.E2d 376 (Ind. 2004). “[E]ven though his client may not have been acting as the respondent’s agent in obtaining the signature on the affidavit, the respondent ratified his client’s direct contact with the employee by failing to take steps to intervene when the client presented the affidavit for signature, by failing to take steps to contact employee’s counsel while he was waiting for him to sign the affidavit, by thereafter taking control of the affidavit once it was signed, and by filing the document with the federal court.” Id. at 379. Based on this, it is clear that while you can advise on communications between parties, you cannot have parties make your communications for you.

3. When in doubt, don’t just talk to the witness

If you are unsure as to what matter the lawyer represents the party on, it is best to pick up the phone and ask for counsel’s consent. If you get the consent you need, follow up in writing and go talk to the witness. But what if you can’t get a consent you feel entitled to? Comment 6 to Rule 4.2 provides, “A lawyer who is uncertain whether a communication with a represented person is permissible may seek a court order.” Based on this, if you cannot obtain consent, take the step of addressing the issue with the court to make certain that you have the court’s blessing when you go to speak to a witness.•