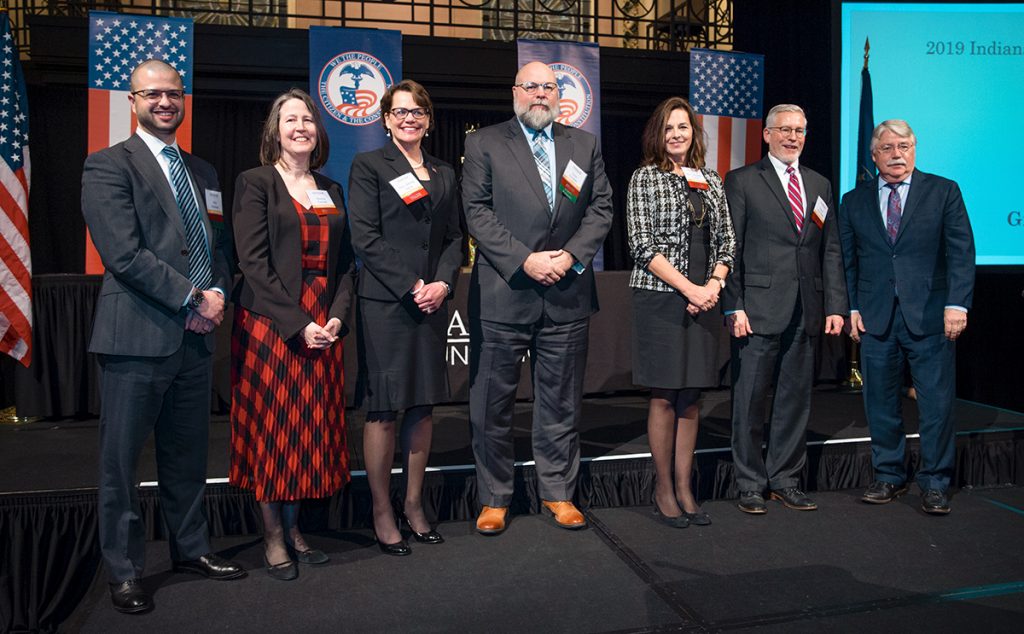 The formula was developed during the 40 years Robinson spent representing clients and serving as the managing attorney in the New Albany office of Indiana Legal Services. He graduated from Purdue University then worked in the nuclear industry before going to law school. After a handful of years working as in-house counsel followed by a stint as an attorney with the Army Corps of Engineers, he asked former ILS executive director Norman Metzger for a job.

In addition to his career with ILS, Robinson served on the first Indiana Pro Bono Commission, convened in August 1999, and worked for 20 years with two southern Indiana pro bono districts.

“I couldn’t find my calling in corporate law or with the Corps of Engineers. I really found my calling … serving low-income people,” Robinson said. “I have rejoiced in my legal services career.”

Scott Wylie, board member of the Indiana Bar Foundation and director of the Volunteer Lawyer Program of Southwestern Indiana, was the master of ceremonies.

Tinker was a reminder that through the courts, ordinary people have brought extraordinary changes. Robinson maintains people have the best chance in the courts when they have a lawyer by their side, a belief shared, he said, by his Pro Bono Commission colleague, now-retired Monroe Circuit Judge Viola Taliaferro.

Other attorneys recognized for their work helping low-income clients were Pro Bono Publico Award recipients Madonna McGrath, a volunteer with Indianapolis Legal Aid Society and Rebecca Wyatt, who has served at the Metro Legal Clinic in northwest Indiana.

Also, the trio of Michael Gastineau, associate at Faegre Baker Daniels in Indianapolis, Jessica Hockemeyer, associate at Faegre Baker Daniels in Fort Wayne, and Bloomington solo practitioner Michael Huerta was awarded a Pro Bono Publico Award for their work responding to inquiries submitted to the Indiana Free Legal Answers website. Together, they responded to 250 questions, comprising 37% of all the questions answered.

Robinson was elated by the opportunity to spend an evening with individuals from across the state who also devote a portion of their practice to helping low-income individuals.

“There’s a lot of good out there and folks like this just make you feel it’s good to be part of the legal profession in Indiana,” he said.

Also, two judges were in the 2019 class. Allen Superior Judge Wendy Davis, credited with bringing the HOPE Probation program to Allen County and Indiana Court of Appeals Judge Elizabeth Tavitas, who served as chair of Northwest Indiana Volunteer Lawyers, Inc. from 2007 through 2012, were named fellows for their work on access to justice issues.

Scott Barnhart of the Indiana Attorney General’s Office was the only non-teacher to receive a Law-Related Education Award, being recognized for his work in the mock trial program.

After the dinner, Houghton listed the benefits mock trial gives to students including analytical thinking and critical reading skills along with the ability to articulate an idea and defend a point of view. She has had some students go on to pursue a legal career, but others have used the skills to win scholarships, become leaders in college and make presentations for doctorial programs.

“I like the fact that it’s an academic competition,” said Houghton, the school librarian. “It appealed to me in the sense that I wish I had an opportunity like that when I was in school, because I am not an athlete, I’m not musically talented. So it’s a nice opportunity for students with different gifts to compete and excel and get the team experience even if they are not very coordinated.”•