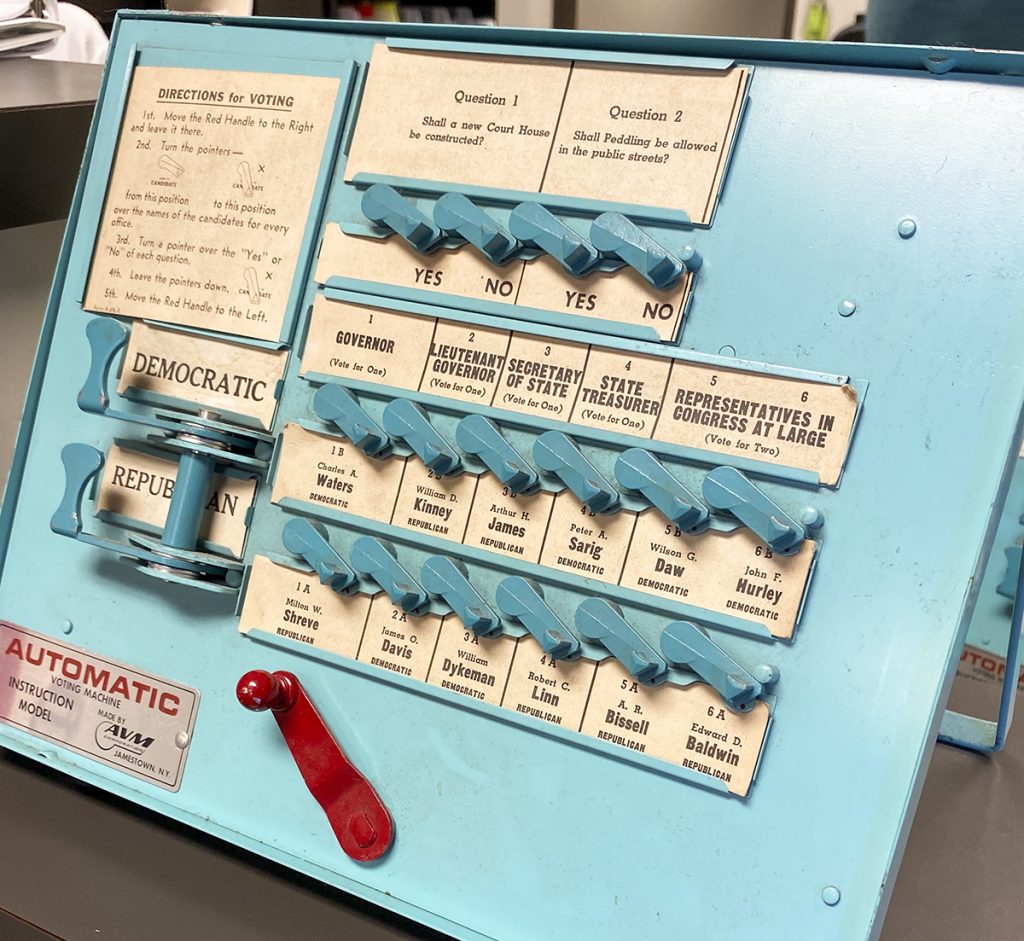 At a time when the nation is questioning the security of electronic voting machines, the Benjamin Harrison Presidential Site is looking back at the equipment and devices used in the past to allow citizens to cast their ballots and have their voices heard.

The exhibit, “Protect the Vote!” at the historic Benjamin Harrison home in Indianapolis explores the development of the attitudes and innovations that shaped how Americans voted in the past and how those votes were counted. Ballot boxes, sample ballots, voting booths and all the apparatus – like a canvas bag used to collect and identify whether the ballots were valid or spoiled – show visitors how the technology of the day was implemented into the election process.

Explaining the history behind the many artifacts on display, Charles Hyde, president and CEO of the Benjamin Harrison Presidential Site, said the exhibit tells the fascinating story of how Americans have worked to have a representative form of government.

“Leveraging technological innovation to help ensure fair and free elections has been fundamental to our system of self-government over the past two centuries,” Hyde said. “It goes hand-in-hand with expanding voting rights and inspiring public confidence in the mechanism by which they choose their public officials.”

A counterclockwise walk around the exhibit ends with an interactive display of two types of voting booths used in the 2000 presidential election. Alongside Indiana’s 500-pound metal hulk that required voters to actually step inside and yank a big red lever to close the curtain is the comparatively flimsy, desk-like booth that was used in Florida.

Visitors can try the system used in some Florida counties of inserting a ballot into a plastic sleeve, then using a small plastic and metal pin to punch a hole beside their choice. In struggling to align the ballot into the sleeve and push with enough force to poke clean through the heavy paper and not leave a hanging chad, Hoosiers will understand why the votes from the Sunshine State are still questioned.

The Florida booth is part of the Harrison home’s collection. Hyde said when the carrels came on the market, the decision was made that the presidential site, in keeping with its mission, should purchase one.

When the booth arrived, the Harrison presidential site team opened it and discovered a bunch of tiny paper circles that had fallen inside when the ballots were punched. Those chads were saved and placed in a Ziploc bag that is now attached to the Florida booth.

The massive gray Indiana voting booth is on loan to the exhibit from the Marion County Election Board. Visitors are welcome to push down the small levers next to their selections for state representative, governor and judges. Then, they can pull the red-handled lever and, as Hyde said, hear the satisfying kerchunk of their vote being counted.

On the wall next to the voting booth is a wide strip of canvas holding rows of meticulously marked keys that unlocked Indiana’s contraption. Banks of counters are contained in the rear of the machine so each time the big lever is pulled, the numbers change.

The exhibit also includes a wealth of photographs, cartoons and the extraneous paraphernalia that has long been used by political campaigns to sway voters. Rounding out the experience are recordings of jaunty tunes: “Fair and Free Elections,” from roughly 1800, and “The Same Merry-Go-Round,” which probably dates from 1948.

“Protect the Vote!” is part of the New Century Curator Initiative, a partnership between the presidential site and the IUPUI Museum Studies program. Jennifer Capps, vice president of curatorship and exhibitions at the Benjamin Harrison home, and Brianna Jackson, the 2019 curatorial fellow, researched, created and organized the exhibit.

The enormous effort to set up the polling sites, get the voters through in an efficient manner, and collect then tabulate the ballots should be a source of pride, Hyde said.

“The election process is in many ways a reflection of our community. If we’re unhappy with the elected officials, it’s incumbent on us as citizens to make changes. If we don’t make our voices heard, nobody else can do it for us.”•