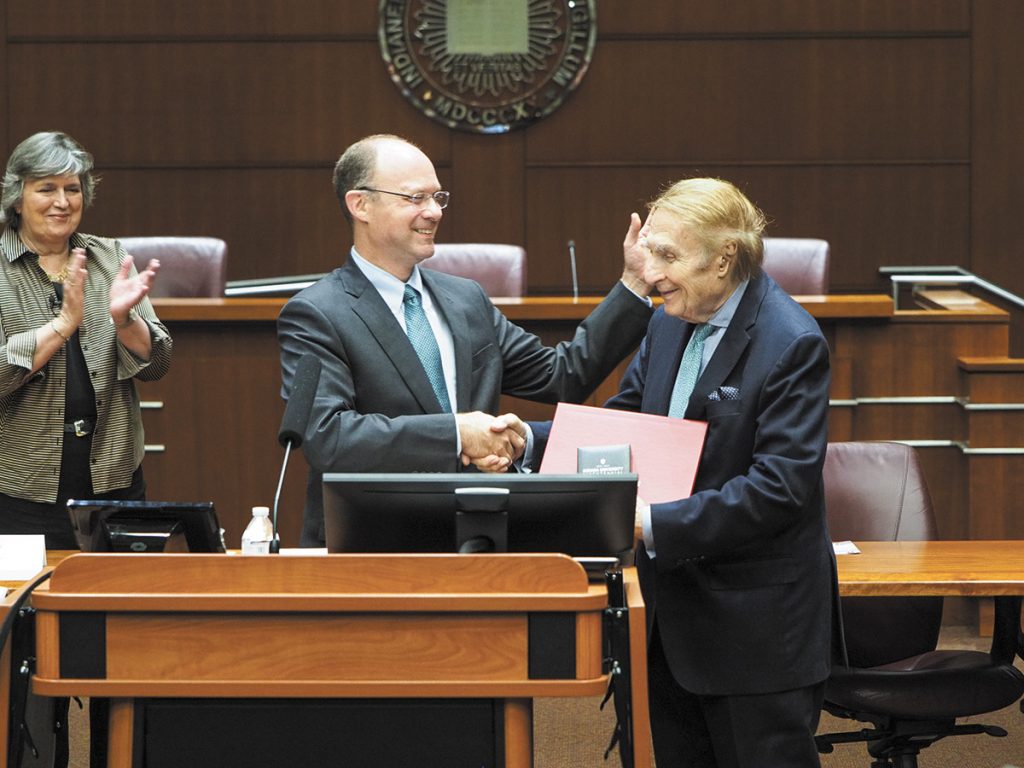 As the Indiana legal profession re-evaluates its bar exam in light of slumping pass rates, a leader in bar examinations and bar admissions offered some insight into testing and provided some advice, as well as some warnings, about making changes.

Erica Moeser was the featured speaker Oct. 29 for the 19th Annual James P. White Lecture on Legal Education at Indiana University Robert H. McKinney School of Law. For 23 years, she served as president and CEO of the National Conference of Board Examiners which, among other things, develops and produces the Multistate Bar Examination, the Multistate Essay Examination and the Multistate Performance Test. She has also been chair of the Council of the Section of Legal Education and Admissions to the Bar of the American Bar Association and was co-chair of the Section’s Bar Admissions Committee.

Her talk, focusing on the history of admitting attorneys to the practice of law and the rise of requiring the applicants to take a test, came as the Indiana’s bench and bar awaits the completion of a comprehensive review of the state’s bar exam. A little less than a year ago, the Indiana Supreme Court created the 14-member Study Commission on the Future of the Indiana Bar Examination. The commission has been tasked with reviewing the current test and recommending changes in format or content.

The Indiana Supreme Court has asked the commission to include in its evaluation a determination of whether the passing score should be cut, the subjects should be changed or the Uniform Bar Exam should be adopted. 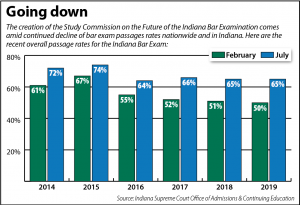 Spurring the review was the drop in Indiana’s bar passage rate. In recent years, the percentage of applicants for admission passing the July bar exam has fallen from near 80% to mid-60%. Also, a committee organized by the Indianapolis and Marion County bar associations identified potential problems with the current test and advocated for some changes.

Speaking after her lecture, Moeser said taking a periodic review of the bar exam is always important, but she cautioned against being quick to assume cutting the pass score will reverse the low passage rates.

Moeser pointed out that bar passage rates dropped across the country because the recession caused law schools to admit unqualified students. Since then, the schools have not only shrunk their class sizes, they have also adjusted their teaching methods to give frequent feedback and better address the different learning styles among the students.

Consequently, she said, the problem of graduates with weaker credentials applying for admission to the bar is going to correct itself.

She also cautioned against Indiana reverting to an all-essay exam. While she likes essay questions because, as she explained, they “allow candidates to express themselves in ways they cannot do on multiple choice,” they can add elements of subjectivity and unfairness to the process. The content and wording of the questions along with who grades the essays are critical and can tilt tests unfairly toward one population.

“I don’t think there is anyone who is an expert at testing that would ever recommend an all-essay test for that reason,” Moeser said.

Currently on the bar exam, Indiana includes its own essay questions about state law. It also uses the Multistate Bar Exam and the Multistate Performance Test. Moeser advocated for the MBE, saying the test provides a consistency in the questions and eliminates subjective grading.

“Perhaps equally important, but underappreciated, the MBE gives applicants the opportunity to show more of what they know in core areas by answering 200 questions than through the Russian roulette of facing eight or more essay questions on a broad range of topics,” she said.

Many states have been tossing their own bar exams and adopting the Uniform Bar Exam, leaving Indiana in a minority of just 15 states that have not embraced the national test. The committee convened by the bar associations recommended Indiana study that test but stopped short of advising its adoption.

Moeser said the Hoosier state could easily convert to the UBE. Because Indiana already incorporates the MBE and the MPT, it would only have to swap its essay questions with the Multistate Essay Examination.

“There’s no jurisdiction that has adopted the UBE that has backed off of the UBE,” Moeser said, noting making the change has not caused great upheaval. “Everyone who gets it, sort of shrugs.”

Indiana’s bar exam study commission will issue its report in December then the Indiana Supreme Court will decide what, if any, action to take. Originally, the commission was to complete its work by Dec. 1 but Indiana Court of Appeals Chief Judge Nancy Vaidik, co-chair of the commission, said the group is going to ask for an extension to Dec. 15 so they can meet one extra time to talk through the topics.

“We’re coming to some consensus,” Vaidik said. “Though there are some dissenters, we are coming to a consensus.”

She declined to say where the commission has been finding agreement, but she emphasized the re-evaluation has been “very productive.” Experts from other states have provided testimony and about 150 from the Indiana legal community, including lawyers, judges and law students, have submitted written suggestions.

Also, the commission has a mix of members. People have brought geographical and racial diversity to the group as well as a broad array of experience.

“We’ve had very thoughtful people on this commission,” Vaidik said. “There was really a good mix of people from all areas.”

Interestingly, Moeser herself never took a bar exam. She received her law degree from the University of Wisconsin, which allows all graduates of Wisconsin law schools to be admitted to the practice of law in that state without having to take the bar exam. Moeser said when she graduated in 1974, five states had the so-called diploma privilege, but now only Wisconsin continues the practice.

Indiana Supreme Court Justice Mark Massa asked Moeser how involved the Wisconsin Supreme Court was in overseeing the curriculum and graduation requirements at the law schools. Moeser noted the curriculum is very elective with students being able to choose from a variety of classes and the requirements are interpreted so broadly that “just about anybody” can qualify for the diploma privilege.

Although the supreme court maintains law schools are offering heavy state-law centered curriculum that justifies the diploma privilege, Moeser said she thinks that view is sometimes a fiction. Marquette University Law School has a more state-centered course offering, but the University of Wisconsin Law School sees itself as more a national institution. As a result, she said, there are graduates coming out of the state’s law schools who could not pass the bar exam but still get admitted under the diploma privilege.

Massa followed up, asking if any evidence was available that Wisconsin consumers are less protected because of the diploma privilege. Moeser said she did not know.

“Our pages are full of lawyers who are disciplined,” she replied. “How that compares to other jurisdictions, I don’t know.”•