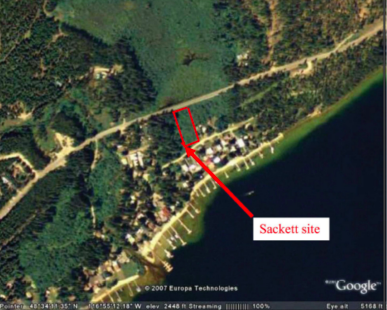 Satellite image of the Sackett site. (Photo from appendix to petition for writ of certiorari)

The U.S. Supreme Court is reconsidering the proper scope of the Clean Water Act in a case that is likely to have sweeping impacts on federal environmental regulation and land development across the country.

In Sackett v. EPA (2022), the court is considering whether the U.S. Army Corps of Engineers and the Environmental Protection Agency were correct in their determination that the petitioners’ empty lot near Priest Lake in Idaho contained “waters of the United States” such that placing fill on the property required a Clean Water Act permit.

The case offers an opportunity for the Supreme Court to revisit its fractured 4-1-4 ruling in Rapanos v. United States from 2006. Due to the lack of a clear majority holding in Rapanos, there are two alternative tests that can arguably be used to determine whether certain wetlands are “waters of the United States” under the act. The Rapanos plurality opinion (authored by Justice Antonin Scalia) provided a restrictive jurisdictional test, holding that wetlands are not subject to federal regulation unless they have a “continuous surface connection” with a “relatively permanent” body of water that flows into a traditional navigable water. Justice Anthony Kennedy’s concurrence in Rapanos articulated the more expansive “significant nexus” test. Under this test, a wetland is subject to Clean Water Act jurisdiction if it, alone or in combination with similarly situated lands in the region, significantly affects the chemical, physical and biological integrity of a traditional navigable water such that a “significant nexus” exists between them.

While the difference in the respective impacts of the two tests is dramatic, the justices at oral argument did not seem very interested in the specifics of either. Instead, there were many comments and questions regarding a “third path” that would balance the governmental and private property interests while still providing more certainty for future parties faced with jurisdictional questions.

The case represents the second time the Sacketts have been to the high court regarding their 0.63 acre Priest Lake property in their ongoing battle with federal regulators. The couple originally prepared to construct a house on the lot in 2007 but were issued an administrative compliance order by the EPA indicating the property contains wetlands and the Sacketts violated the Clean Water Act by placing fill on the lot without a permit under Section 404 of the act. The Sacketts sought to challenge the determination and the matter reached the Supreme Court on procedural grounds. In 2012, the court agreed with the Sacketts that a compliance order was a reviewable final agency action, and the matter returned to the district court for the Sacketts’ substantive challenge.

In the substantive challenge, the lower courts sided with the agencies, finding that the record supported their determination that the wetlands on the Sacketts’ property are waters of the United States because the property 1) is “adjacent to” Priest Lake and its tributary; and 2) in combination with other similarly situated wetlands, has a significant nexus with traditionally navigable waters.

Notably, the “adjacency” of the property was identified as an independent jurisdictional basis by the EPA and by the district court and the 9th Circuit Court of Appeals. The justices at oral argument also seemed much more interested in discussing the meaning of “adjacent” than they were in the specific tests set forth in Rapanos, leading to speculation that the court will articulate a new rule centered on adjacency.

In their briefing and at oral argument, the Sacketts emphasized that the lot is 300 feet from an actual “traditionally navigable water” (Priest Lake) with residential development in between and is not, in fact, even “adjacent” to the tributary of Priest Lake because it is separated from the property by a road. The current agency definition of “adjacent wetlands” — which was summarized by EPA’s counsel as “reasonable proximity” — includes those wetlands “bordering, contiguous, or neighboring” a water previously identified as a “water of the United States,” including waters separated by “constructed dikes or barriers, natural river berms, beach dunes, and the like.” 33 C.F.R. § 328.3(c)(1); 40 C.F.R. §§ 230.3 & 232.2. EPA acknowledged there was not necessarily any distance-based limitation on what may be considered “adjacent” which seemed to trouble some of the justices.

In terms of the likely ruling from the court, there are a few possibilities.

First, the court could take the opportunity to reject the “significant nexus” test, offering a relatively narrow clarification on the scope of the act as it has done periodically over the years, including in Riverside Bayview Homes (adjacent wetlands are waters of the United States) and SWANCC (invalidating the agencies’ migratory bird rule as a basis for CWA jurisdiction). Based on the questions and comments from the justices, the expansiveness and unpredictability of the “significant nexus” test is a major concern and will likely be scuttled by the court. But because the agencies argued jurisdiction was supported based solely on “adjacency,” a mere rejection of the significant nexus test would not resolve the dispute.

Second, the court could affirm the Rapanos plurality’s “continuous surface connection” test as the proper test for determining whether wetlands are jurisdictional. This was the original ask from the Sacketts in their petition for certiorari, but then during briefing, they expanded their proposed resolution to adoption of a two-part test incorporating commerce clause concerns (described below). But many of the questions from the justices seemed to indicate that the “continuous” connection requirement went too far and would leave out many wetlands traditionally considered to be “bound up” with traditionally navigable waters.

Third, the court could create an entirely new rule for determining wetlands jurisdiction, independent of those articulated in Rapanos or in recent agency rulemakings. The Sacketts initially framed the issue on appeal as whether the test from the Rapanos plurality opinion should be adopted as the controlling jurisdictional test. After granting certiorari, the Supreme Court on its own decided to reframe the questions as, “What is the proper test for determining whether wetlands are ‘waters of the United States’ under the Clean Water Act?” The difference is important, as it potentially would allow the court to go far beyond the question of which of the competing Rapanos tests is proper.

Given the focus in the justices questioning, a new rule from the court would likely be centered on a new definition of “adjacent wetlands,” which may or may not incorporate elements of the existing agency definition or the Rapanos tests.

Although there was not much attention given to the question at oral argument, a new rule could also include some jurisdictional limitation based on the commerce clause. Earlier CWA jurisprudence had a heavier focus on Congress’ constitutional authority for regulating intrastate waters. See, e.g., SWANCC. But recent opinions have been more focused on statutory authority and congressional intent. The Sacketts, perhaps sensing that the commerce clause limitations may be of interest to the current court, added a second part to their proposed jurisdictional test during the briefing. The second part asks if the water at issue is among “those waterbodies subject to Congress’s authority over the channels of interstate commerce.”

The anticipated spring 2023 issuance of the court’s opinion in this case is likely to complicate efforts by the EPA and the Corps to craft an effective and workable definition of “waters of the United States” by rule. The agencies under the Obama (Clean Water Rule) and Trump (Navigable Water Protection Rule) administrations each engaged in extensive rulemaking efforts to define the scope of CWA jurisdiction, but those rules were both undone by legal challenges or repeal by subsequent administrations. The Biden administration has a new definitional rulemaking in process. This proposed rule will almost certainly need to be revised — or perhaps even overhauled — depending on the scope of the court’s holding in Sackett.•

Dan Cory is a partner at Plews Shadley Racher & Braun LLP. Opinions expressed are those of the author.