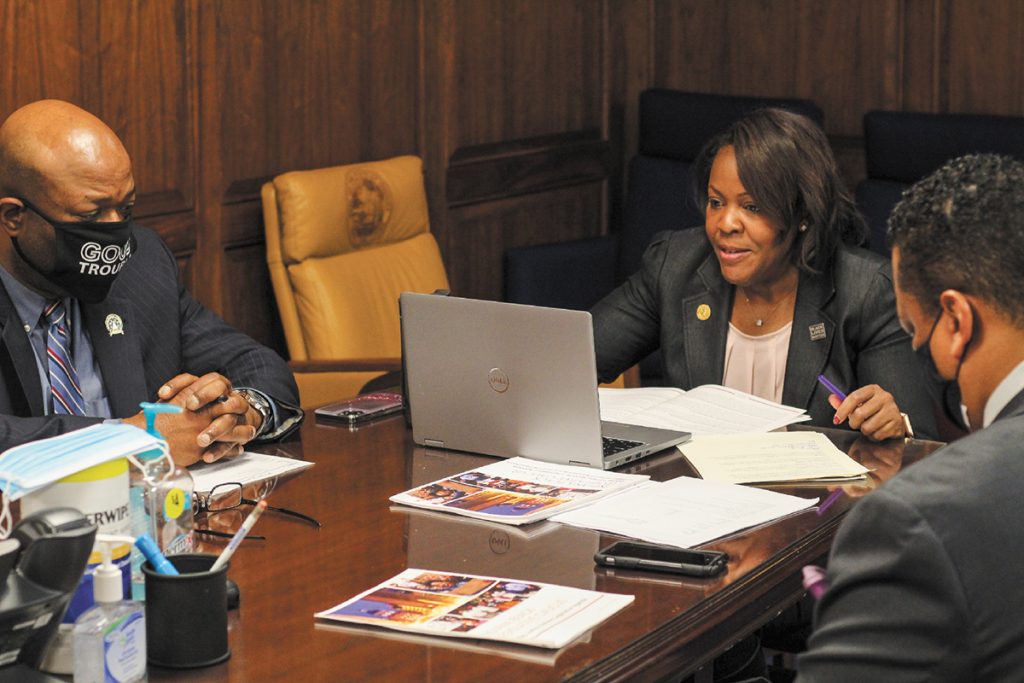 Normally the Indiana Black Legislative Caucus has to work session after session just to get one of its bills heard in the Statehouse, and sometimes the victories they celebrate come when their language is adopted into another bill that, in the end, does not even list members as a co-author or sponsor.

The caucus is again offering a comprehensive and aggressive agenda for the 2021 session of the Indiana General Assembly. The bills promote police reform, institute changes to juvenile justice, and address inequities in the health care system, among other things. Many have been introduced in previous sessions, but this year the caucus leaders are optimistic their legislation might have more momentum because of the spotlight on race and social injustice during 2020.

“If we didn’t have the protests during the summer, if we didn’t have the people being able to see African Americans, the Jewish Community being discriminated against front and center, I think we wouldn’t have more of a willingness to actually see change happen and more of a willingness to get things done,” said Rep. Robin Shackleford, chairwoman of the IBLC.

An indication of the potential change in attitude is House Bill 1006, a police reform bill that covers a range of issues, from requiring officers receive de-escalation training to defining “chokehold” as a deadly force to penalizing officers who intentionally turn off their body cameras. The bill includes several matters championed by the IBLC.

Rep. Greg Steuerwald, R-Avon, is the lead author and Shackleford is the lone Democrat listed as a co-author. The measure has broad support outside the Statehouse and has been moving through the lower chamber, passing both the House Courts and Criminal Code committee and the House Ways and Means committee with unanimous support.

Taylor said now that he has a seat at the leadership table, he has been able to get the Senate Republican leaders to agree to move some of the Democratic bills forward. Also, IBLC has met with Karrah Herring, the state’s first chief of equity, inclusion and opportunity officer, to discuss getting the governor’s office to advocate for some of the measures championed by the caucus.

Some of the bills scheduled to be considered by the Senate “are right in line with the Indiana Black Legislative Caucus agenda,” Taylor said. “…We will see in the next couple of weeks several Senate Democratic bills that will be heard in committee. I think that’s a good change for the citizens of the state of Indiana.”

The 14 members of the Black Legislative Caucus have introduced 36 bills this session that fall under the broad categories of “Save Lives,” “Hold Accountable,” “Empower Communities,” “Change Culture” and “Improve Transparency.” Shackleford said the agenda is the result of hours spent talking to a variety of groups such a law enforcement, prosecutors, public defenders, community organizations and faith leaders.

“There was a whole list of groups we sat down with because we wanted to make sure we were getting everybody’s perspective,” the Indianapolis Democrat said.

However, IBLC bills have struggled in past years to gain much traction in the Statehouse. Shackleford attributed the snub to the Black Caucus members all being part of the Democratic super minority and all being from urban areas. Their counterparts across the aisle who hail from rural communities, she said, do not believe their constituents are having the same concerns as the residents of larger metropolitan areas.

The IBLC has long pushed and fought to get their bills a hearing. For the 2021 session, the caucus is conducting weekly virtual advocacy training sessions so more community members and constituents will know how to voice their support of or opposition to particular measures to the legislators. 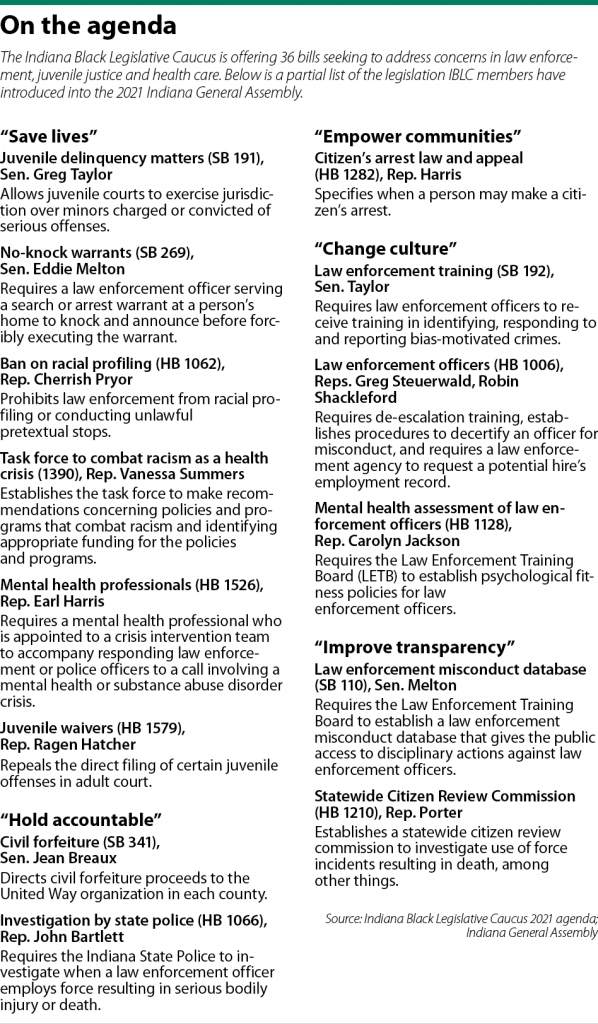 Shackleford said the turnout so far has been good, with 250 community members, businesspeople and nonprofit leaders attending the online series. In-person advocacy has been greatly curtailed because of the safeguards put in place in the Statehouse to protect the representatives and senators from COVID-19 pandemic.

Nevertheless, the IBLC has been encouraging the advocates to email and call the legislators. Also, the caucus members have been regularly videoconferencing and providing updates to different groups.

Shackleford has seen the power of the public change a committee chair’s mind.

In 2018, Rep. Greg Porter, D-Indianapolis and a member of IBLC, introduced a bill regarding bedbugs, but tucked in the language were some inadvertent provisions that animal lovers felt would be harmful to feral cats. According to Shackleford, the flood of emails convinced the House Public Health Committee to give HB 1327 a hearing just so the public would have the opportunity to air their concerns.

The extension of the traffic amnesty program that the IBLC leader has been promoting cleared the House Courts and Criminal Code Committee but, as has happened in the past, her name was not on the measure.

Shackleford introduced HB 1445, which would continue the program that reduces some fines and fees so certain individuals can get their driving privileges reinstated, but when she saw the bill, by itself, might not get a hearing, she approached Rep. Wendy McNamara, R-Evansville, and Gov. Eric Holcomb’s office and got their blessing to offer an amendment to HB 1199.

Within minutes of presenting her amendment Jan. 27, the committee passed it by consent. The traffic amnesty program could help an estimated 300,000 Hoosiers, but Shackleford’s contribution to HB 1199 is not publicly noted anywhere on the legislation.

“It’s a little frustrating,” Shackleford said. “But, to me, if I can at least get a policy passed and the community will benefit from that policy, that is my main goal. My name doesn’t have to be on it.”•