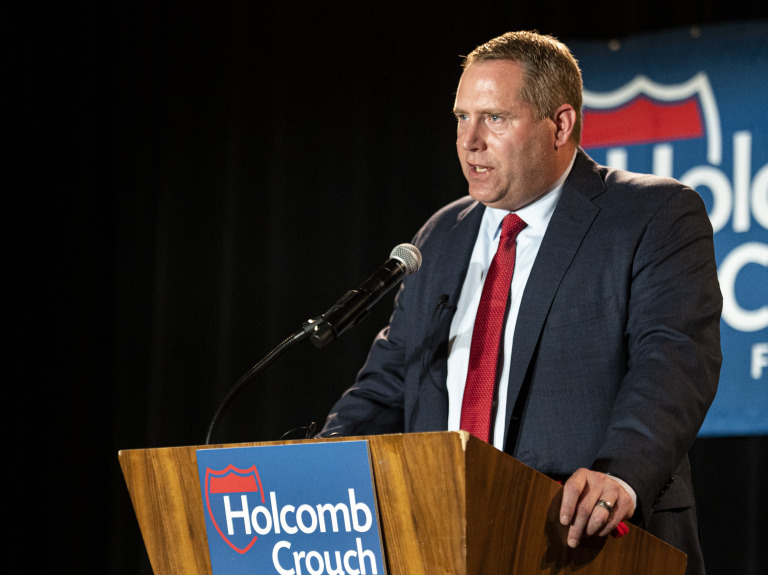 Indiana GOP chairman Kyle Hupfer addresses a crowd at a victory party for the Republicans in the Grand Ballroom of the JW Marriott hotel in downtown Indianapolis on Election Night, Tuesday, Nov. 3, 2020.

Indiana Republican Party Chairman Kyle Hupfer is looking to move up — by running for the number two spot at the Republican National Committee.

“I just think that we are at a unique crossroads for the party. 2024 is going to be a critical election,” he told the Indiana Capital Chronicle in an exclusive interview. “I served … as an officer for the RNC. I am familiar with how it works and a broad swath of the party. I think I can help out.”

Specifically, he said Republicans need to “look at things differently to grow the party nationally.”

That has happened in pockets already, such as Gov. Ron DeSantis drawing Hispanic voters. But it’s time to do more.

“Our voters are getting older and we’ve got to find ways to connect with diverse and younger Americans and message to them why the Republican Party is good for the country,” Hupfer said.

The RNC will choose its chair and co-chair at its winter meeting in late January.

Hupfer would need to get a majority of 168 votes, said Nathan Brand, spokesman for the RNC. Indiana has three of those votes — Hupfer’s as the state party chair and the state’s two committee members.

Brand said for one to be considered they have to be nominated by individuals from three states.

Hupfer was named General Counsel for the RNC in February 2021.

Current RNC Chairwoman Ronna McDaniel is running for reelection against Harmeet Dhillon, a California attorney who is also an RNC committee member. McDaniel has circulated a letter with around 100 supporters — a virtual lock on the election.

Former President Donald Trump said he likes both of the candidates, and declined to endorse.

Hupfer has been Indiana Republican Party Chairman since 2017. Under his leadership, the GOP controls every statewide office; has supermajorities in the House and Senate; has nine of 11 federal seats and more than 80% of all county offices. It is possible a new chairman would be needed, but Hupfer said he has not considered that yet.

“It’s not a requirement to get a new state party chair. I haven’t thought that far down the road,” he said. “We will give it some thought and deal with it depending how it goes.”

Hupfer said Indiana’s profile could rise if he wins — allowing him to showcase Indiana’s electoral and fundraising successes to  other states.

He said the RNC co-chair doesn’t have specific duties and that would likely to ironed out after elections, should he win.

“It depends on the chair and their strengths and weaknesses,” Hupfer said.

“He has spent a lot of time fundraising and working on the grassroots and I think that’s probably where my focus would be. But the chair is running the show,” Hupfer said.