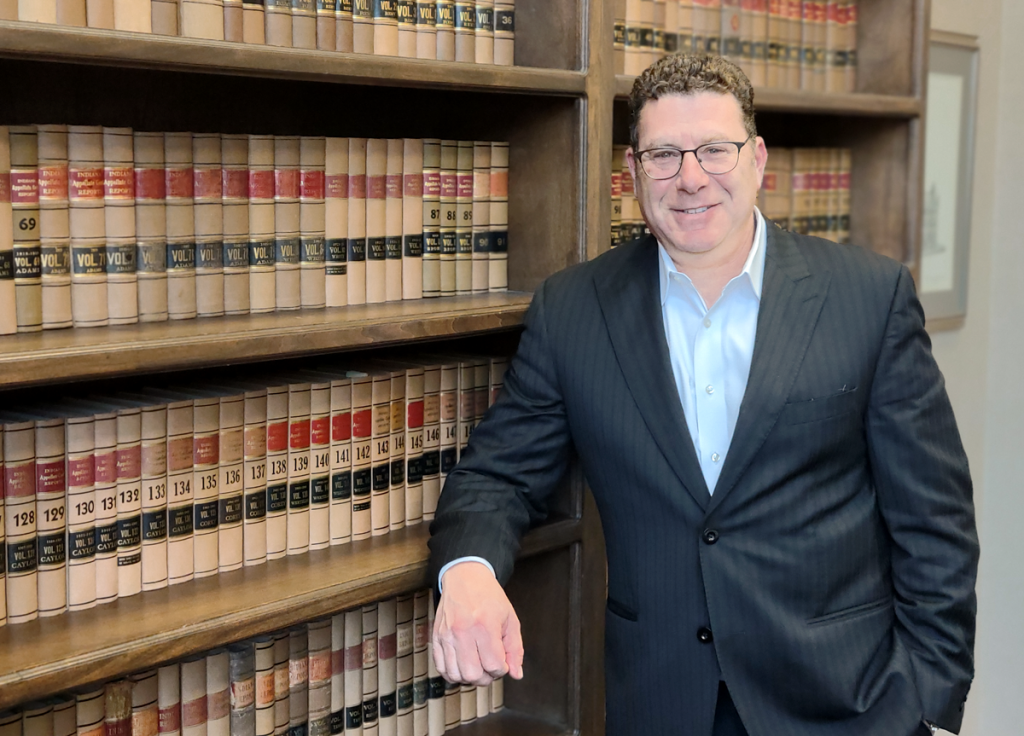 Indianapolis bankruptcy lawyer Mark Zuckerberg stays at the office each day until every phone call has been returned. But when he gets free time, he plays the drums and is a beekeeper. (IL Photo/Marilyn Odendahl)

Mark Zuckerberg may owe his career to starting at a law firm that put his office at the end of the hall.

Fresh from earning his J.D. at Capital University Law School, Zuckerberg settled into practicing bankruptcy law with Steve Ancel in Indianapolis. The firm was doing a lot of corporate bankruptcies, which often were accompanied by personal bankruptcies. Those latter cases kept moving down the hall, getting waved away by the other attorneys, until they reached Zuckerberg’s desk.

“I love bankruptcy,” Zuckerberg said. “Most people come in and they’re crying and upset. And it’s one of the few areas of the law where I can turn to them and say, ‘For this amount of money, this is what I’m going to give you.’ … When they leave, when you see people leave my office, you can see them physically (sigh with relief). They hug me. Who hugs a lawyer?”

Zuckerberg has been embraced not just by his clients but also by his colleagues.

The Circle City native has made presentations on bankruptcy matters to local bar associations and national organizations such as the National Conference of Bankruptcy Judges. He has extended his teaching into the classroom at Indiana University Robert H. McKinney School of Law and the Indiana Statehouse, where he helped rewrite Indiana’s exemption statute.

Zuckerberg describes himself as a “bankruptcy nerd” and keeps abreast of the law and courts by routinely reading and cataloguing news and journal articles along with advance sheets. He shares his knowledge not only with clients but also the wider public, having once debated Iowa Republican Sen. Charles Grassley on National Public Radio. Also, he almost appeared on The Oprah Winfrey Show before getting bumped at the last minute by a Harvard law professor named Elizabeth Warren.

However, his most recent accolade makes him the proudest. Zuckerberg has been invited to join the American College of Bankruptcy and will be inducted in April as a member of the 33rd Class of Fellows. The organization selects individuals in the field of bankruptcy and insolvency who have a proven record of the highest standards of expertise, leadership, integrity, scholarship and service.

Zuckerberg will be just the eighth Hoosier to be inducted into the college and the first consumer bankruptcy attorney from Indiana to receive an invitation.

“It’s an extreme honor to be thought of this way by my peers, to even be nominated, let alone let in,” he said.

As a Chapter 7 bankruptcy trustee for the Southern District of Indiana, Deborah Caruso has seen Zuckerberg handling cases in federal court. She said he works hard and arrives prepared, knows the case and current caselaw, provides excellent representation to his clients, and is always professional and polite. Through his work with clients and his service to the legal profession, she said, Zuckerberg has distinguished himself as “one of the best consumer bankruptcy lawyers in the country.”

Caruso, also a bankruptcy attorney at Rubin & Levin in Indianapolis and a 2019 inductee into the college, maintained bankruptcy attorneys helping individual consumers do valuable work, even though they do not always get the attention that is shined on their colleagues who handle commercial bankruptcies.

“(Zuckerberg) shepherds people through the process when they are hit with financial hardship,” Caruso said. “Getting those people a fresh start is equally as important as reorganizing a Fortune 500 company in a Chapter 11 proceeding.”

These days, Zuckerberg, along with most members of the bankruptcy bar, has more time to read and clean his desk as bankruptcy filings have dropped to lows not seen since 1985.

Moreover, where Zuckerberg has averaged roughly 1,500 cases year, he had just 15 cases in October, which is the worst month his practice has endured since the 29 cases he handled when he first opened his own office in September 1991.

Yet Zuckerberg said he is sleeping fine because he has learned bankruptcy is cyclical and eventually the number of filings will start trending upward. He said he believes the end of government responses to the COVID-19 pandemic, such as stimulus checks and moratoriums on foreclosures and student loan payments, will bring a wave of people needing bankruptcy protection.

“I don’t want to wish ill will on anybody but it’s going to happen. It has to happen,” Zuckerberg said of the anticipated upswing in bankruptcies. “Our whole society is based upon consuming. When people are burdened by debt, they can’t consume, and bankruptcy is there to clean them out so they can get back and start consuming again. I think a lot of people are going to be burdened with debt they can’t handle because of the pandemic, and they haven’t been working and the free money has stopped.”

Zuckerberg works from a street-level office a few blocks from the Birch Bayh Federal Building and U.S. Courthouse in Indianapolis. His day ends only after he has returned every call. He learned how important it is to respond to pleas for help from his own experience of being a new parent to a sick infant and spending time picking up the receiver to make sure the phone still worked while waiting for the doctor to call back.

“The later you call people, the more people appreciate it,” Zuckerberg said. “If you call somebody back at 6 or 7 o’clock, they’re like, ‘Oh my God, this guy has stayed late just to answer my phone call.’”

As a young man, Zuckerberg was interested in medicine, wanting to become an orthodontist until, he said, his college chemistry course told him to become a lawyer. But he has been most influenced by the lessons he learned working in his family’s clothing store.

His great-grandfather started with a pushcart on Monument Circle, and when he earned enough money, he opened a haberdashery. Growing up, Zuckerberg stocked shelves, cleaned and developed the habits of successful small business owners. He still makes sure he dresses well, keeps good records and carefully tends to his clients.

“I treat everybody as if they’re going to write a Google review,” Zuckerberg said. “And I don’t want anyone to ever have a chance of writing something bad about our interaction.”•