Home » IndyBar President’s Column: The One Where Ross, Rachel, Seinfeld, and Keith Hernandez Move The IndyBar 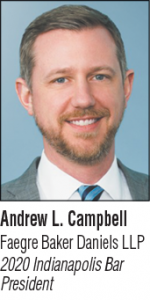 Nineties sitcoms — especially “Friends” and “Seinfeld” — are back in a big way (if they ever really went anywhere to begin with). Ironically, my favorite episodes of each involve moving. In the “Friends” episode where Rachel helps Ross shop for a new couch, Ross declines the delivery charges. Instead, he asks Rachel and Chandler to help him move the new sofa up the stairs, as Ross screams, “pivot!”

In my favorite “Seinfeld” episode, Jerry befriends former New York Mets first baseman Keith Hernandez and neurotically tries to make a good impression only to become jealous when Keith starts spending more time with Elaine. But when Keith asks Jerry to help him move, Jerry realizes, “I don’t feel right about it. I mean, I hardly know the guy. That’s a big step in a relationship!”

The last friend that I asked to help me move was Jayson McGrath — former prosecutor and current deputy attorney general. We met in Professor Lloyd Wilson’s contracts class on our first day at the Indiana University Robert H. McKinney School of Law. By the time I asked him to help me move — just after graduation — we’d been in the trenches for three years of law school. Still, like Jerry and Keith, it was a big step. As I recall, I never had to yell, “pivot!” Today, no matter how long it’s been since our last lunch or after work drink — and I’ll admit, it’s been a few years — that move solidified our friendship in the way that only carrying someone else’s furniture can.

Unbeknownst to many, a few loyal members and the IndyBar staff have been busy moving all of us. The IndyBar’s lease on the 15th floor of the BMO building ended on Jan. 31. Starting last year, former IndyBar President Jeff Abrams and current Indianapolis Bar Foundation (IBF) President Lee Christie led a capital campaign to fund new office space. Many of you contributed to raising more than $500,000 — an incredible sum that reflects the strong commitment that many of you have to the IndyBar.

Raising the money wasn’t enough, though. We still needed a home. Thanks to former IBF President and current IndyBar treasurer Dave Duncan, we negotiated a new lease on the first two floors of 140 N. Illinois Street — just south of the corner of Illinois and Ohio streets. Dave helped guide a complete remodel of the space, which will be more accessible and member-centric. The “new space” will open on March 2, and we are planning a grand opening celebration in early April.

Most importantly, however, Julie Armstrong and the IndyBar staff have dedicated the last many weeks to the physical move — the literal and figurative furniture that holds the IndyBar together. I always took for granted the physical infrastructure of the IndyBar. But when you must catalog it, sell off or give away what’s no longer needed and box up the rest, you begin to appreciate the dimension of our association. Fortunately, we sold off the law library in the early 1990s.

Harder still is the stuff that can’t be boxed up: the hidden networks of telecommunications, audio visual infrastructure and computer systems and the infinitesimal details of transitioning 11 staff members to temporary or home-office space, only to move them all again to the permanent location. And they’re doing all of this while seamlessly staffing the work of the sections, divisions, committees and special projects of the IndyBar.

Later in the “Seinfeld” episode with Keith Hernandez, Jerry and George parody the “magic bullet theory” featured in the film “JFK.” The parody is brilliant, and when the episode resolves the “magic” is revealed in hilarious fashion. To many of us, moving the IndyBar will be like magic. We will see and be amazed by the beautiful new space. In that moment, we will forget that magic isn’t real. The revelation, however, is that the magicians are real. They are Julie and the IndyBar staff who are moving all of us. They are solidifying our collective professional friendships in the way that only carrying someone’s professional furniture can. While I doubt that Julie will yell “pivot!” during this move — she and the IndyBar staff are way too organized and smartly hired movers — I do expect that they will appreciate our patience.

See updates on the move at indybar.org/newhome. Staff will be working remotely throughout February but will be accessible via email and phone. View the staff directory at indybar.org/staff.•