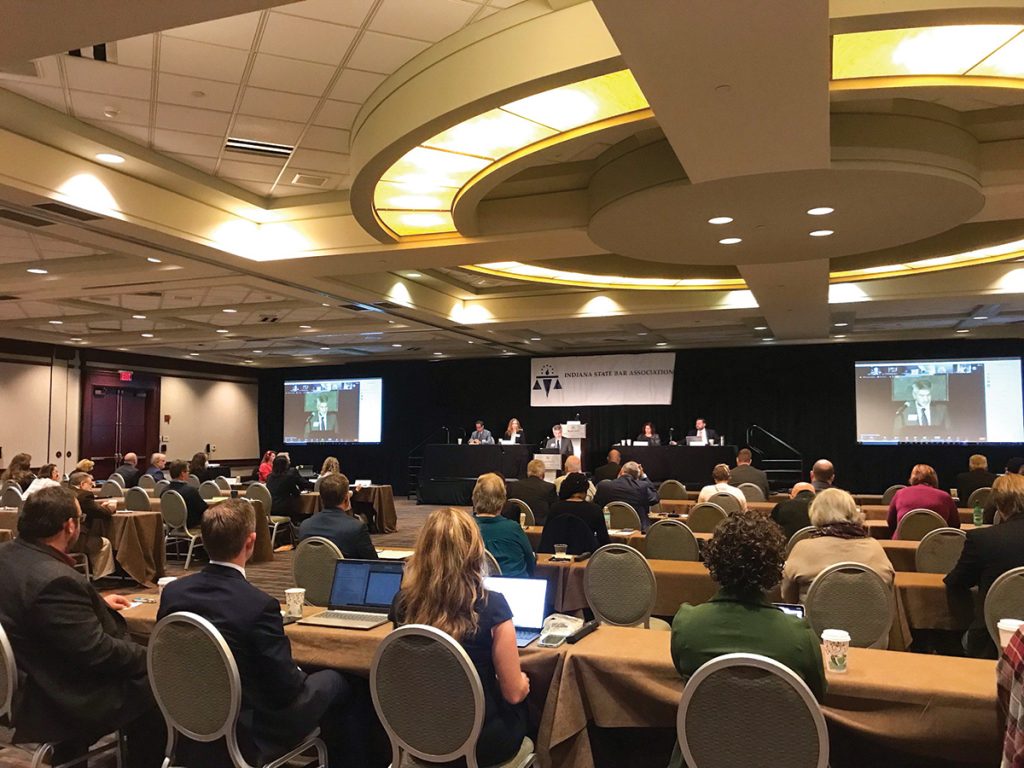 The ISBA House of Delegates meets in Indianapolis on Oct. 15. (Photos courtesy of ISBA)

The theme of the 2021 Indiana State Bar Association House of Delegates Meeting, and the bar’s annual summit, could be summed up with one word: streamlined.

On Oct. 14 and 15, legal professionals from each corner of the Hoosier State converged on the Indianapolis Marriott Downtown Hotel for the bar’s annual gathering.

This year’s event was a modified version of the ISBA Annual Meeting, altered in an effort to better “align with the goals expressed by members through our recent strategic plan process.” This year’s summit featured more thought leadership and didn’t include CLE sessions, and offered participation both in person and virtually.

Following Thursday night’s reception, various meetings were held for members to reflect on the past year as well as look toward the future.

During his presentation, Tolbert expressed his appreciation for how the bar has worked together during the pandemic, saying he feels the ISBA is “stronger than ever.”

“(COVID-19) has required we rethink the way we deliver our services to our members,” Tolbert said. “It has required us to rethink how we engage our members, and the membership committee has been instrumental that every aspect of our association and every member feels personally connected with the services we provide them.”

Tolbert shared that the ISBA has more than $3 million in cash reserves and a “healthy” budget that “will last for years to come.”

During his presentation for the Indiana Bar Foundation, Barnhart shared that the organization has been reevaluating what its mission is “to be the premier, statewide organization and trusted partner in advancing civic literacy and civic legal assistance in Indiana.”

Barnhart recalled how the foundation was “instrumental” in helping pass House Enrolled Act 1384 in 2021, which will require a civics curriculum in middle schools across the state. He also highlighted the youth programs throughout the state and encouraged those in attendance to get involved.

Barnhart said the foundation will disperse $3.5 million in grants and funds supporting civil legal assistance and pro bono service throughout the state this fiscal year.

The discussion during the delegates meeting focused on the Indiana Innovation Initiative, which was created in September 2019 “to analyze research on justice reform, assess the impact of reform efforts in other states, identify innovative strategies to manage different case types, and make recommendations to the Indiana Supreme Court for best practices surrounding Indiana’s justice system structures and procedures.”

As part of the effort, the Supreme Court created two task forces, one focusing on family law and the other on civil litigation, to make recommendations for improved case management.

Court of Appeals Judge Elizabeth Tavitas led discussions for the family law task force while Steven Badger, partner and general counsel at Barnes & Thornburg LLP, headed the talk on civil litigation with the help of Robert Rath, chief innovation officer for the Indiana Office of Judicial Administration. Rath is head of the Technology Task Force, which has worked with both the family and civil litigation committees.

Tavitas reviewed the task force’s recommendations for family law, which were filed in March, while Badger gave some insight as to what the civil litigation group is considering before its report is due at the end of the year.

The task forces have taken information from the National Center for State Courts, Institute for the Advancement of the American Legal System, National Council of Juvenile and Family Court Judges, Conference of Chief Justices and Conference of State Court Administrators, among other organizations, in crafting their recommendations.

Each presentation offered suggestions as to how resources can be better utilized to make the judicial process more efficient and concluded with questions from the in-person and online crowd.

Freedom Smith, a partner at Ice Miller LLP and at-large ISBA Board of Governor’s member from Indianapolis, said she has been a member of the bar for 14 to 15 years, and the delegates meeting provides good background on what the key issues are statewide.

“How we practice, in many ways, is changing,” Smith said, adding the event helps lawyers and judges network with each other.

At the conclusion of the delegates meeting, Angka Hinshaw of the Marion County Public Defender Agency was selected as chair-elect of the House of Delegates, and Monroe Circuit Court Judge Holly Harvey was passed the gavel by Jasaitis for the upcoming year.

Justin Harrison of Monroe County said it was his first time attending the House of Delegates meeting, and he has been an ISBA member for 10 to 12 years.

“I’m excited about the initiatives they announced for the various task forces,” Harrison said. “It sounds like they’re working on making the court system more efficient, which is a worthwhile endeavor. I’ll be reading the reports in more detail now that I’ve heard more from their proposals.”

“I consider it to be a great honor to be entrusted with leading our state bar association for the coming year,” Miller said. “Not only do I believe in the importance of the ISBA’s work, but the many friendships I’ve made through the ISBA over the years are truly special to me, and I’m eager to get to know and befriend many new acquaintainces this coming year.”

ISBA board members for 2021-22 were also announced during that time: