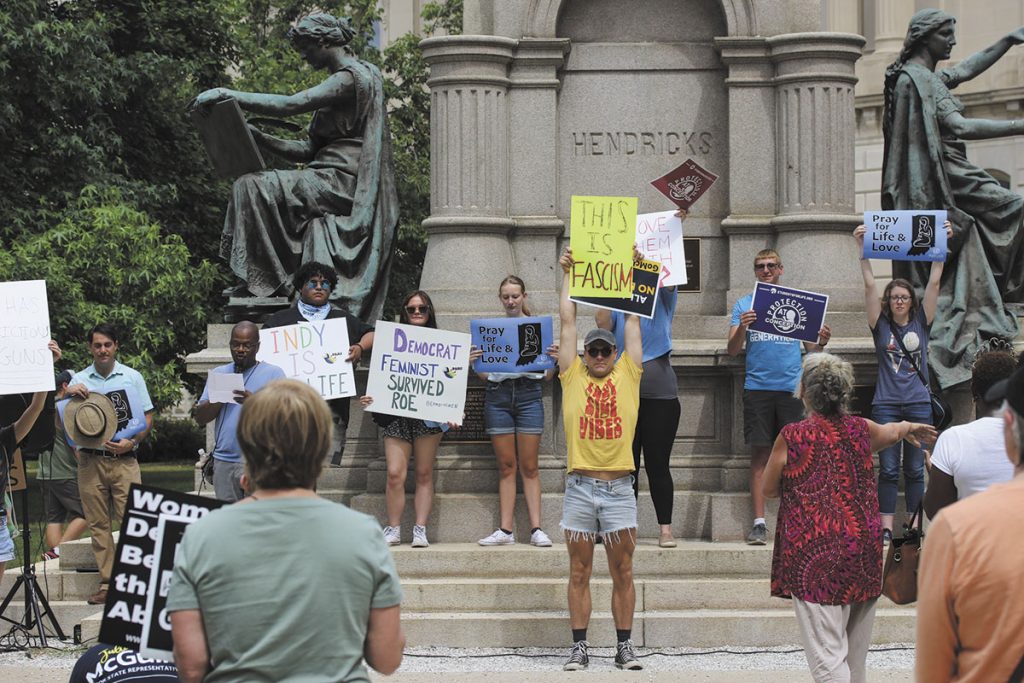 The weeks between now and the start of the Indiana Legislature’s special session might be the calm before the storm.

With the U.S. Supreme Court sending abortion decisions back to the states, Indiana Republican leadership expanded the agenda for the special session from tax relief to also include the crafting of a new abortion law. The Republicans have been mum on their specific plans, but many anticipate the supermajority will put more restrictions on the procedure, if not ban it outright, while Democrats are hoping for bipartisan consensus to address related issues like improving maternal and infant health care.

Ed Feigenbaum, publisher of the Indiana Legislative Insight for Hannah News Service, said he believes legislators will hammer out their own law rather than copy one of the abortion statutes that other states, like those in Texas and Oklahoma, have passed in recent months. Yet in taking a do-it-yourself approach, Hoosier lawmakers will face the difficult challenge of having to make “dozens and dozens of decisions” on multiple issues.

Feigenbaum noted lawmakers will have to decide things like whether to reduce the number of weeks when a woman can terminate her pregnancy or to outlaw abortion altogether; what regulations to put on abortion-inducing medications mailed from out-of-state providers; whether women should be prosecuted for driving across state lines to have an abortion; and whether employers should be sanctioned for helping their workers get abortions in other states.

Conversely, he continued, if legislators decide life begins at conception, they may have to tackle questions like whether tax deductions will be allowed for someone in utero.

Indiana House Speaker Todd Huston, R-Fishers, and Senate President Pro Tem Rodric Bray, R-Martinsville, have announced the special session will start July 25 and likely last for multiple weeks. The leaders are expecting legislators to “further protect life, and support new and expectant mothers” by vetting bills through the full legislative process, which will include committee hearings and public testimony.

Pro-choice and pro-life supporters rallied on the Statehouse lawn the day after the Supreme Court issued its ruling in Dobbs v. Jackson Women’s Health Organization, in which the majority held the “Constitution does not confer a right to abortion.”

Sen. Liz Brown, R-Fort Wayne, has been an ardent opponent of abortion in the Legislature and was recently named by Politico as among 50 state lawmakers across the country who will shape the future of abortion. She acknowledged the division the issue of abortion incites and maintained the Legislature’s priority is making Indiana a better place.

“This is about making sure that the baby and the mom have the services they need and the opportunities they need,” Brown said. “This is not about pointing fingers or getting angry and trying to vilify the other side.” 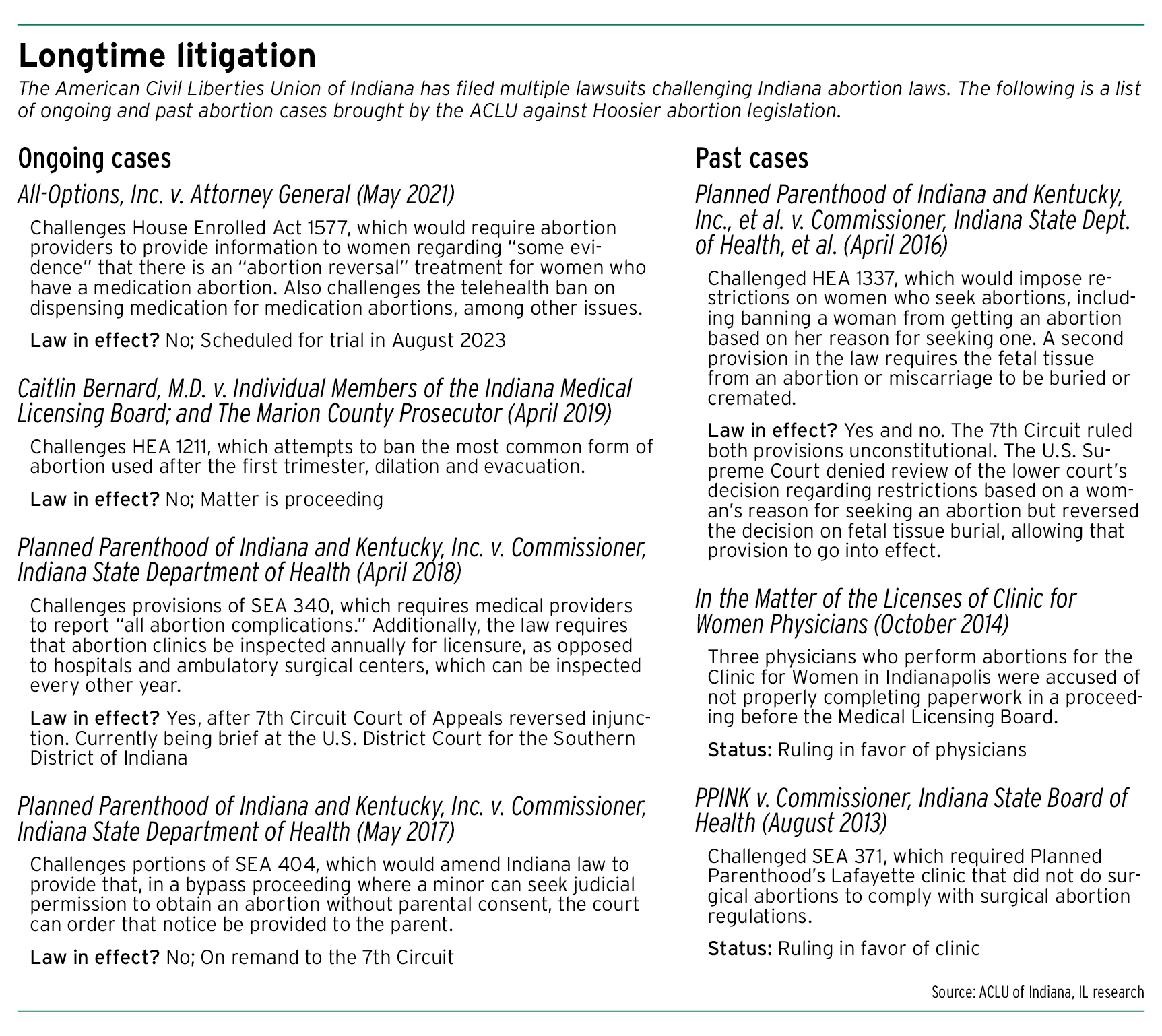 First-term Rep. Maureen Bauer readily recites the statistics and blocked bills regarding women and mothers, but she said she is nevertheless hopeful lawmakers on both sides of the aisle will find common ground during the special session.

“Maybe this will be our opportunity to collaborate and actually see policies passed that will help make Indiana a more supportive state to mothers and their children,” the South Bend Democrat said.

Bauer outlined her frustrations. While Indiana has the third-highest maternal mortality rate in the nation and the eighth-highest infant mortality rate, bills that would have provided paid family leave and enabled women to take time off work after a stillbirth or miscarriage have failed to gain traction.

However, conversations about those issues are being tabled for now as Bauer noted the Democrats are concerned about provisions in the new legislation. Namely, the minority is pushing to keep the exemptions for rape, incest and the life of the mother.

The representative said she believes one way to moderate the Republicans’ views is to hear stories from doctors and nurses about how the restrictions will impact women’s health care. More education is needed to counter the misinformation and perception that women have “abortion for leisure,” Bauer said.

EXTRA
Read more about SCOTUS’s reputation after the Dobbs decision.

Brown said legislation is being drafted, and even though she did not specifically say whether women who were victims of rape or incest would be able to get an abortion she said the bill would affirm Indiana’s pro-life stance.

The senator explained the Senate Republican Caucus believes life should be protected from conception until natural death. The definition of conception is “when the embryo is embedded in the womb,” so any time this has not happened, women will have options under the Republican legislation.

Women with ectopic pregnancies will be able to get the procedures they need because, Brown pointed out, “an ectopic pregnancy, by medical definition, is not a baby in the uterus.” Also, the bill will not prevent the use of the morning-after pill as long as the woman is not yet pregnant.

“Unlike my opponents on this issue, personally and the state of Indiana has always decided that the most important thing is the life of the mother and the life of the baby,” Brown said. “There are always two lives we’re talking about here and we are doing all we can to make the mother’s life and the baby’s life safe and healthy.”

Advocacy groups like Women4Change are already trying to get their voices heard.

Rima Shahid, CEO of Women4Change, said her organization is focused on preventing “the most egregious and the devastating bill,” like legislation modeled after the Texas or Oklahoma laws, from passing.

Like Bauer, Shahid said her group is working to keep the exemptions that are currently in Indiana law and get legislation that addresses some concerns mothers have such as the lack of maternal health care in the state’s rural communities, getting paid family leave and providing help with access and cost of child care.

“Women make up a majority of the population,” Shahid said. “We are determined to get our point across, we are determined to have these conversations with them and make them aware of the concerns of Hoosiers and how we can make life a little bit easier for Hoosier women.”

The Indiana Family Institute did not respond to a request for comment as to whether it is lobbying lawmakers. The Indiana Chamber of Commerce said it generally does not weigh in on social issues because of the differing viewpoints of its membership.

“The Indiana Chamber does not have a formal position on abortion and will not take one unless proposed legislation infringes on employers’ rights to conduct business and establish benefit programs as they deem appropriate as was attempted in the 2022 session regarding COVID-19 vaccination or testing requirements,” Kevin Brinegar, Indiana Chamber president and CEO, said in an email.

Polling by the Bowen Center for Public Affairs at Ball State University shows Hoosiers are mostly evenly split over the issue, with 48% favoring abortion and 45% against abortion. This divide could fuel a contentious special session, but Chad Kinsella, director of the Bowen Center, said he is doubtful the anger will create another storm in November.

“There’re probably small groups on either end (of the abortion debate) that this is absolutely critical,” Kinsella said. “But probably in terms of middle-class people, this may become less of an issue in particular when you think about all the other things going on right now … the price of gas and everything like that, that’ll be something a little bit more in your face as opposed to maybe abortion.” •