With the signing of House Enrolled Act 1214 into law, Hoosiers who have been evicted then struggled to overcome the stigma now have a way to scrub the “Scarlet E” from their records.

The bill, which sailed through the Indiana General Assembly with only a single vote in opposition, makes a key change to Indiana law by allowing tenants to seal their eviction records in certain circumstances. For eviction petitions that get dismissed or end with a judgment entered in favor of the tenant, the court can prohibit the record from being publicly disclosed.

“This is the first time that we’ve really addressed this issue of eviction stigma and how it can hurt people years on down the road,” said Sen. Tim Lananae, D-Anderson, during third reading in the Senate. “So it’s a really positive step forward.”

The provision has been referred to as an eviction expungement, but Brandon Beeler, Housing Law Center director at Indiana Legal Services, said the better term is eviction sealing. Regardless of the terminology, Beeler said he sees the ability to remove an eviction filing from public view as a benefit to tenants.

Beeler has seen the harm that can result from a past eviction, or even just the filing of a petition that did not lead to an eviction. Hoosiers with an eviction on their record can have a difficult time finding another place to rent and can face trouble landing a job.

The ILS attorney has worked with clients who lost their residences because they had a run of bad luck caused by an illness or unexpected expense that put them in a financial hole. It may have been just a one-time situation and they have since found their footing, but that eviction continues to haunt them.

Also, Beeler has helped clients who got their evictions dismissed because the landlord did not meet the burden of proof. Yet the “E” is on their record, and they are suffering the consequences as if they had been evicted.

“I think that’s where we’re going to see a big impact,” Beeler said. “Hopefully tenants who either won their case or just maybe had a one-time bad luck … will hopefully avoid the snowball into poverty.”

The new law comes just as Indiana is coping with an eviction crisis exacerbated by the COVID-19 pandemic. According to the Indiana Office of Judicial Administration, 50,725 eviction case were filed in the state in 2021.

While the bill was winding through the Legislature, Manning said the sealing language was retroactive, which would allow tenants with past evictions to possibly get relief. 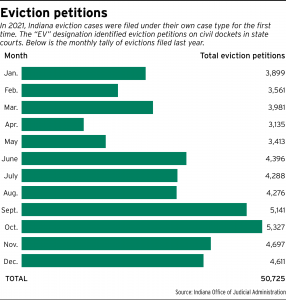 Beeler and his team are already prepared to advocate, including for people with the scarlet letter from years past.

“Hopefully the idea is that tenants who met one of those categories in an earlier eviction case could still qualify for that protection of the sealing,” he said.

When the bill arrived before the Senate Judiciary Committee, Sen. Eric Koch, R-Bedford, worked with the bill’s author to make some key amendments to the legislation.

Completely removed from the bill was the section that had prohibited “eviction action information providers” from compiling and publishing eviction records that had been restricted from public access or contained inaccurate information. The provision had some muscle, with the inclusion of language that anyone ignoring the prohibition would be in violation of the state’s Deceptive Consumer Sales Act.

However, Manning explained to the Senate Judiciary Committee that the section had been stripped because it conflicted with the federal Fair Credit Reporting Act. The representative told committee members that states are preempted from creating laws that impose additional regulations on information contained in consumer reports.

Another change modified the requirements surrounding eviction diversion programs. Those are mediation-like sessions during which a property owner and tenant are encouraged to talk and find an alternative to eviction.

The Indiana Supreme Court started the Landlord and Tenant Settlement Conference program in August 2020 in advance of the anticipated onslaught of eviction filings. In October 2021, the court issued an order requiring state courts adjudicating a residential eviction for nonpayment of rent to advise the parties of the program and the availability of emergency rental assistance.

Language mandating that participation in any eviction diversion program be voluntary was kept in HEA 1214. However, the bill was altered to remove the requirement that the diversion programs be linked to emergency rental assistance funding.

Beeler said the diversion programs not only help alleviate the burden on state courts caused by the high number of eviction filings, but also provide an opportunity for a tenant to avoid going through an eviction. Even if an agreement cannot be reached, the program can still give the renter a little time to find another place to live before getting kicked out.

It’s likely the new law will get used, because the number of tenants needing help with evictions is not decreasing.

“Eviction courts, especially here in Central Indiana and throughout the state, our attorneys are reporting and judges and advocates have said, the courts have never been this busy,” Beeler said.•