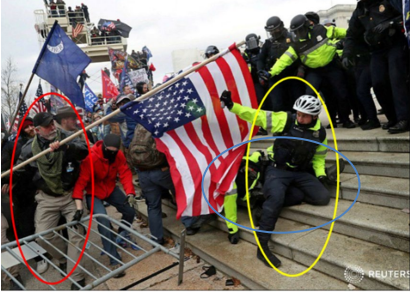 Dale Huttle, of Crown Point, is allegedly shown hitting law enforcement with a flagpole during the Jan. 6, 2021, riot at the U.S. Capitol. (Photo taken from Statement of Facts)

A northern Indiana man and his nephew are the most recent Hoosiers to be criminally charged in connection with the Jan. 6, 2021, riot at the U.S. Capitol.

Dale Huttle, 61, of Crown Point, is facing seven total felony and misdemeanor charges while his nephew, 40-year-old Matthew Huttle, of Hebron, is facing four misdemeanor charges, the Department of Justice announced Monday. The Huttles were charged in a criminal complaint filed in the U.S. District Court for the District of Columbia.

Dale Huttle was arrested Nov. 9 in Crown Point and has been released pending further court proceedings in Washington, D.C., according to the U.S. Attorney’s Office for the District of Columbia. Matthew Huttle was arrested Monday in Boise, Idaho, and will make his initial appearance in Idaho federal court later this week.

Court documents allege Dale “engaged in at least two violent confrontations with law enforcement offices on the Lower West Terrace” of the Capitol Building. Matthew is alleged to have entered the Capitol briefly during the riot, exited the building, then reentered a short time later.

According to a statement of facts  supporting the criminal complaint, Dale’s first alleged encounter with law enforcement began at about 2:05 p.m. on Jan. 6, when a group of rioters — who were seeking to stop the certification of now-President Joe Biden’s electoral victory over former President Donald Trump — were attempting to break down a barrier of bike racks on the Lower West Terrace.

The statement of facts notes that the charge of entering and remaining in a restricted building can be based upon being in a building that “persons protected by the Secret Service” — including the vice president — are visiting. It also notes that then-Vice President Mike Pence was in the Capitol throughout the riot, including during the evacuation period.

As for Matthew, court documents point to videos found on his Google account that show him and his uncle spending time on The Ellipse in Washington, D.C., before walking toward the Capitol. A man alleged to be Matthew is heard on the video saying, “We are all going to the state (sic) capitol,” and, “Going to see if we can get in.”

A second man alleged to be Dale is also heard on the video saying, “Think we ought to bum rush the Capitol building”; “Arrest them all”; “We have enough people to do that”; “Let’s go, let’s go, storm the front”; “Let’s squeeze our way up there”; “Breach it!”; and, “Are you ready to go to jail? Let’s go.”

Matthew reached the Capitol at about 2:56 p.m. and is heard on the video saying, “We’re going in,” according to the statement of facts. He then allegedly entered the building via the doors to the Senate wing at about 2:58 p.m. before leaving roughly two minutes later.

Then, prosecutors allege, Matthew reentered the building via the same door at about 3:06 p.m. and entered multiple offices, hallways and the Crypt. At one point, he turned the camera toward his face and said, “This is me.”

Court documents tie the Huttles to the riot via bodycam footage, Matthew’s video and cellphone data.

The case was not yet listed in online PACER records at IL deadline, so no contact or attorney information for either Dale or Matthew was immediately available.

Nearly 900 individuals have been charged in connection with the Jan. 6 riot, according to the DOJ, including multiple Hoosiers. That includes Quentin Cantrell, an Indianapolis attorney who is facing four misdemeanor charges for allegedly entering the Capitol and climbing down an exterior wall.

Additionally, Dona Sue Bissey, of Bloomfield, was sentenced late last year to 14 days of incarceration and 60 hours of community service for a conviction of parading, demonstrating or picketing in a Capitol building, according to The Associated Press.  Her friend Anna Morgan-Lloyd, also of Bloomfield, received three months of probation for the same offense, according to WUSA-9 in Washington, D.C.

In March, Jeffrey Munger, of Goshen, was charged with disorderly and disruptive conduct in a restricted building or grounds and parading, demonstrating or picketing in a Capitol building, according to AP.That same month, Nancy Barron, of Patriot in Switzerland County, surrendered to face the same charges.

Then in June, 39-year-old Michael Greene, also known as Michael Simmons, was charged with conspiracy and other related counts connected to the Jan. 6 riot. Simmons is an Indianapolis member of the Oath Keepers militia group, AP reported.

In October, Mark Mazza, of Shelbyville, was sentenced to five years in prison plus three of supervised release after pleading guilty to assaulting a police officer using a deadly weapon and carrying a firearm without a license. He had been charged with 13 offenses total, according to the AP.

The most recent Indiana case involving the Huttles was investigated by the FBI’s Indianapolis and Washington, D.C., field offices, with assistance from the U.S. Capitol Police, the Washington, D.C., Metro Police and the Boise Police Department. The case is being prosecuted by the U.S. Attorney’s Office for the District of Columbia and the Counterterrorism Section of the DOJ’s National Security Division, with assistance from the U.S. Attorney’s Office for the Northern District of Indiana.