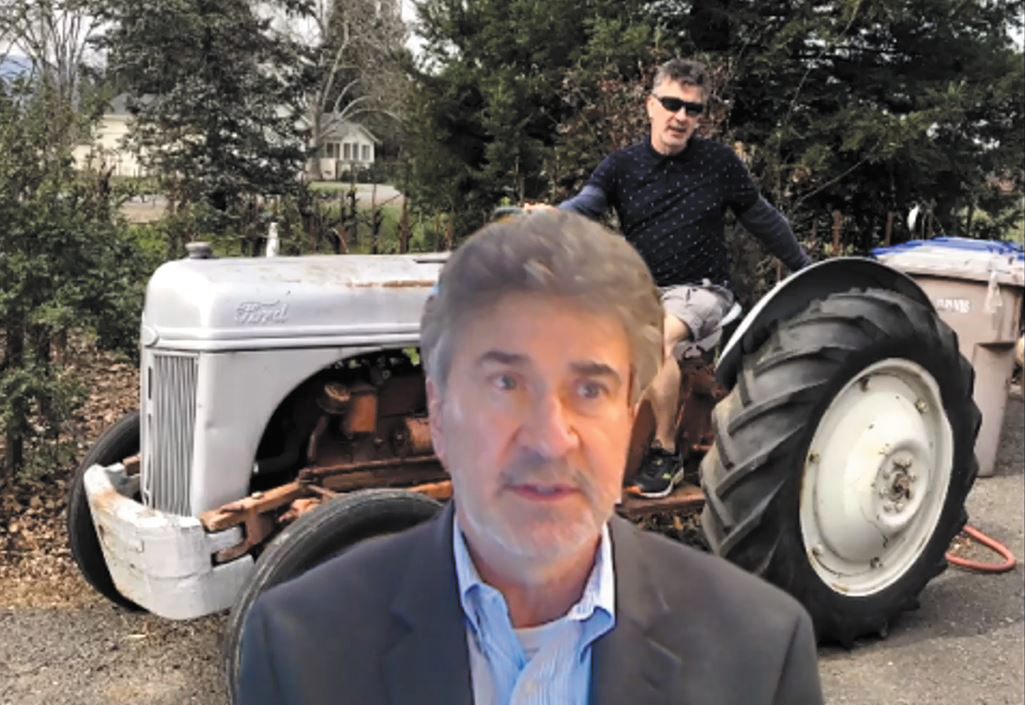 Indiana Justice Steven David is credited with having the initial idea for the 2020 Vision webinar series, designed to reassure and assist new admittees to the Indiana Bar. (Photo courtesy of Indiana State Bar Association)

Although he did not recognize the number, Nick Bauer answered his phone anyway and found himself talking with chief justice of Indiana.

The 2020 Indiana University Maurer School of Law graduate helped write a letter to the Supreme Court, relaying the fears he and his classmates had about the potential for the Indiana Bar Exam to be postponed because of the COVID-19 crisis. More than 70 members of the Class of 2020 from Indiana law schools signed the letter, with some including personal stories of how a delay would impact them.

The writers acknowledged gathering all the applicants in one place to take the exam in July would pose grave health risks. However, not offering the exam also threatened serious harm.

Primarily, the graduates would be squeezed financially and emotionally because they would not be able to get J.D.-required jobs and would struggle to support themselves and their families, as well as to pay their student loans. Also, a delay would likely force them to juggle studying for the bar while working full time, which could lower their chances of successfully passing the exam.

“We came to law school to be lawyers, to serve others in a time of crisis in their lives,” the letter said. “We have learned to be tough, confident and zealous advocates but we have also learned when to ask for help. Today, we need your help.”

The call from Chief Justice Loretta Rush was to let Bauer know the court had listened.

In an order issued May 7, shortly after Rush’s phone call, the court provided assurance to the graduates that the bar exam would be given in July, as usual. But the test would be changed, trimmed from two days to one and given remotely.

Bauer was relieved and impressed by the court’s action.

“Having the bar exam will not solve every issue” the graduates are facing, he said. “But I think having the July exam will alleviate some of the concern and uncertainty in the world right now.”

The July bar exam is one example of the Supreme Court’s nimbleness as it moves in a new direction to help recent law school graduates and new lawyers overcome the stress and hardship created by the pandemic. Within the span of roughly two months, the justices moved the May admission ceremony online so those who passed the February bar could begin their legal careers as soon as possible. The court also established the graduate legal intern program to give 2020 graduates the option of getting a limited license.

Additionally, the court has been working with the Indiana State Bar Association and the Judges and Lawyers Assistance Program to develop a special webinar series geared toward helping Indiana’s newest crop of attorneys launch their careers. Entitled “2020 Vision Going Forward: How to See Yourself Through This,” the initiative is focused on providing advice and encouragement during these difficult times.

He pointed out that the 2020 J.D. graduates have been battered unlike any other class. The public health emergency forced them to complete their final courses online, and now they are stepping into a job market that is in turmoil. On top of this, they are saddened by not being able to celebrate their achievements as schools have canceled graduation ceremonies.

“They’ve been just superb in showing their concern for new lawyers in a difficult environment,” Klein said of the justices. “I’m impressed and grateful.”

The Supreme Court’s decision about the July bar exam has placed Indiana in a lead position.

The Hoosier state was the first to make the decision to go forward with the test in July. Michigan has since announced that it will also administer an adjusted version of its exam in July.

Aaron Taylor, executive director of the AccessLex Center for Legal Education Excellence, said this approach is best because it neither puts the test-takers at risk of catching the illness by having an in-person exam in July nor forces the graduates to remain in an extended period of limbo caused by delaying the exam.

Moreover, Taylor is confident the reformatted exam will still adequately screen for minimum competency among the applicants.

“I don’t think Indiana is going to have unethical, unfit lawyers entering the profession because of this new format and online administration of the bar exam,” Taylor said.

Under the new format, the July bar will consist of two parts. The first section will be the Indiana Essay Exam, which will be unchanged from what is typically given. The second section will consist of short answers to questions drawn from topics tested on the Multistate Bar Exam.

A spokeswoman for the Supreme Court said the justices’ approach to finding solutions for graduates and new lawyers mirrors how they have been addressing the needs of the state trial courts and legal profession brought on by the pandemic. Their top priorities have been protecting the health and safety of the courts’ employees, as well as the broader legal community, and continuing the essential operations of the judicial branch.

However, before making any decision related to coronavirus-induced problems, the justices are talking to state judges, bar association members, law school deans and others. It has been described as a “360-degree approach where all aspects are being considered.”

Austen Parrish, dean of Indiana University Maurer School of Law, has been a part of those conversations. His worry over postponing the July exam centered on the possibility of a second COVID-19 wave preventing a September or October exam, and the potential that 2020 graduates would tire of waiting to take the bar and opt to pursue other careers.

Graduates have certainty they will be able to continue preparing for and taking the bar as they had planned to do. In addition, the public will be protected from unqualified attorneys and the legal profession will get a fresh batch of lawyers.

“Indiana responded really well,” Parrish said. “If the whole point is to test minimum competency, then why can’t we do that in a one-off test?”

The other initiatives offered by the Supreme Court are providing additional support the graduates and new lawyers need to maneuver the upheaval created by the coronavirus.

For those just out of law school who cannot take the bar until February 2021, the graduate legal intern program will give them the opportunity to practice on a limited basis under the supervision of a licensed attorney. Parrish called the program a “safety net” for those graduates who cannot take the July exam possibly because of child care issues, an illness or an inability to get a stable internet connection.

The 2020 Vision program is enlisting the expertise from the Indiana legal community to give the graduates and new admittees some reassurance and assistance.

A mix of live conversations and prerecorded presentations, the four, hour-long webinars will focus on professional and personal well-being. Local bar associations around the state will be able to augment the program by providing additional materials or activities.

The program will offer the tools the new admittees will need, particularly as they start practicing in a pandemic. For example, Klein will be moderating a discussion among lawyers who will explain how they eventually thrived even though they began their careers at the height of the Great Recession.

ISBA President Leslie Henderzahs foresees opportunities for some cross-fertilization. Not only will the new lawyers be able to learn from the insight and experiences of the seasoned attorneys, but they will also be able to promote and create an “innovative mindset” within the profession.

Indiana Justice Steven David, who has given out his cellphone number at admission ceremonies and encouraged the new class of attorneys to call him whenever they need help, is credited with having the initial idea for 2020 Vision. He deflected the praise, saying the program is the work of many people who care about the new attorneys and want them to succeed.

“Our purpose is to help the new admittees and have them feel good about their decision to go to law school and be Indiana lawyers,” David said.

The pooling of ideas and resources that led to the 2020 Vision initiative is illustrative, the justice said, of how the court has been working to meet the changing needs of the graduates and new lawyers.

“Everything we’ve done as a court has been, from my perspective, well thought-out and a collaborative discussion, getting key input from critical stakeholders,” David said. “There has been a lot of hard work by a lot of people … in difficult times.”•