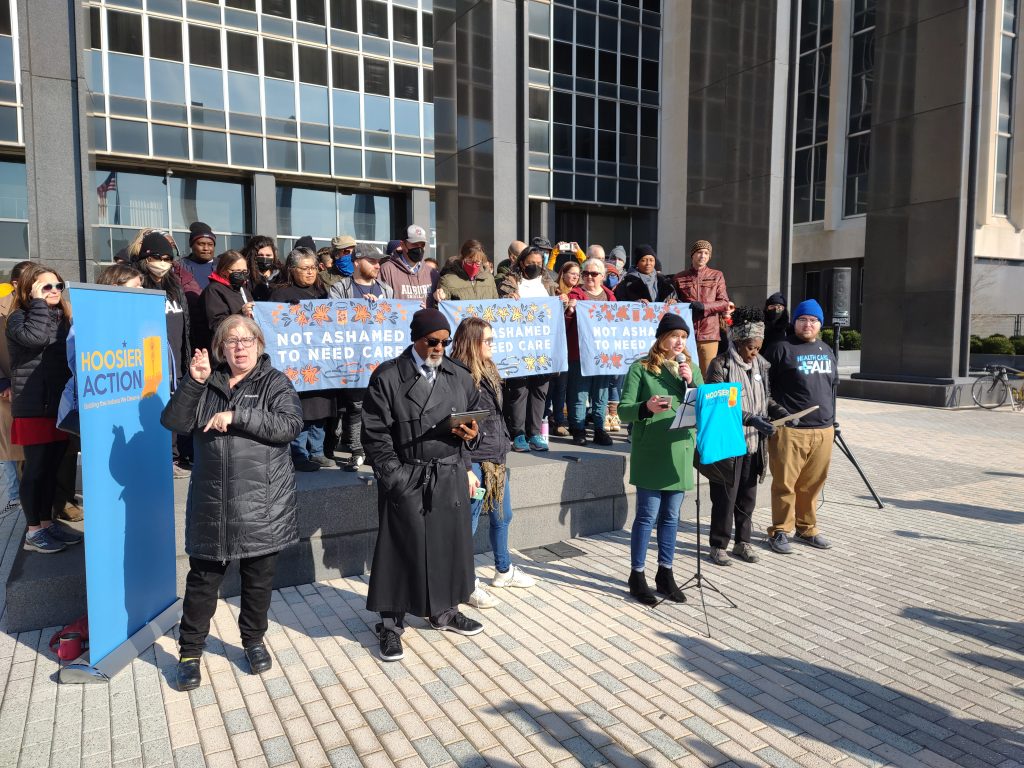 Although the oral arguments have passed, grassroots organizers in Indianapolis are sustaining the pressure on the Health & Hospital Corporation of Marion County to withdraw its case pending before the U.S. Supreme Court that advocates fear could harm the most vulnerable members of society.

Hoosier Action organized a rally Monday morning with disability, faith and nonprofit leaders along with recipients of public benefit programs to again call upon HHC to pull its petition in HHC, et al. v. Talevski, 21-806. A series of speakers took turns at the podium, warning of the outcome if HHC wins its case, while a sizable group stood behind holding signs that read, “Not Ashamed to Need Care.”

“We say to (Indianapolis Mayor Joe Hogsett) that as an attorney, you know that Health and Hospital Corporation is providing the Supreme Court with a platform to issue a ruling that would make it very difficult to hold the government accountable for violating the rights of people who depend on federally-funded safety net programs,” Rev. David Greene, of Concerned Clergy of Indianapolis, said. “… To Mayor Joe Hogsett, the board and the leadership of Health and Hospital, we say, ‘It’s not too late to do the right thing. Listen to the concerns of your community and advocates around the country and withdraw your petition.’”

The case has nonprofits and aid organizations across the nation fearful that the U.S. Supreme Court will find private citizens cannot file lawsuits under 42 U.S.C. § 1983 to enforce the requirements of federal benefits programs like Medicaid, Medicare and the Supplemental Nutrition Assistance Program. Removing the ability to seek a judicial remedy, the groups say, would put the elderly, the disabled and the infirmed at risk of not receiving proper care or support.

Lucas Waterfill receives Medicare, Medicaid and Social Security benefits and depends on the 12 hours of care he gets every day. He told the crowd his benefits are a matter of life and death while accusing HHC of using the lawsuit to bolster its profits.

As the speakers stepped to the microphone in the cold morning air and spoke in opposition to HHC, the crowd responded with, “That’s right.” The people also applauded and cheered.

At the end of the press conference, they got into a call-and-response. Tracey Hutchings-Goetz, communications and policy director of Hoosier Action, asked “When our health care is under attack, what do we do?” And the crowd yelled, “We fight back.”

Originally, a complaint was filed in the Indiana Northern District Court on behalf of Gorgi Talevski, a resident of Valparaiso Care & Rehabilitation. The lawsuit alleges the nursing home did not provide proper medical care in violation of the Federal Nursing Home Reform Act.

In going before the Supreme Court, the case has been expanded to question whether any private right of action can be filed under Section 1983 to enforce spending clause statutes. The justices heard oral arguments in the case Nov. 8 and did not seem persuaded by HHC’s stance.

HHC has been under pressure from a variety of groups to drop its petition to the Supreme Court.

Grassroots organizations have sent more than 100,000 emails to the individual members of the HHC board of trustees requesting that they stop HHC in its fight against the Talevski family, according to Hutchings-Goetz. Also, the group delivered a petition from more than 20,000 individuals and 200 organizations.

The City-County Council’s Committee of the Whole passed a special resolution Nov. 7 stating its opposition to the petition and calling upon HHC to withdraw. In a statement to the Indianapolis Star, Hogsett asked HHC to toss the first question of its case, which could limit all Section 1983 claims, and just focus on the question that concerns Talevski’s treatment.

Monday, the organizations urged the mayor to “use all of his influence and power” to push HHC to drop the entire petition. Also, they announced plans to attend the HHC board of trustees’ meeting Tuesday and again ask the board members, face to face, to drop the lawsuit.

“I cannot comprehend why the HHC board would act in such a way that would harm our nation and our people and the residents of Marion County,” Annette Johnson, Pike Township trustee, said. “Please, Mayor Hogsett, do something.”