When planning for the 2020 holiday campaign started last February, Indianapolis Legal Aid Society had big ideas to host a kickoff party and enlist volunteers to talk to donors face-to-face with the goal of bringing in record contributions.

Then the COVID-19 crisis changed everything.

Campaign committee members soon began meeting by videoconference. The launch party shifted to a virtual format, and volunteers had to rely on emails, phone calls and Zoom calls to ask their colleagues in the legal community to give. Moreover, the campaign was coming at the end of a year where donors had already been solicited many times by multiple organizations to meet the growing demand for help.

“With the pandemic, I thought, ‘Oh my goodness, are we going to be able to raise any money?’” he said.

Despite the obstacles, the holiday fundraiser not only collected donations but surpassed the original goal of $225,000. Indianapolis Legal Aid Society has looked to the annual campaign in recent years to provide much-needed dollars as the United Way of Central Indiana has pulled back its support. But the event seemed to have hit a ceiling, collecting a little more than $150,000 annually.

The 2020 campaign’s total of $227,987 as of IL deadline, is creating some mid-winter relief and elation at the legal aid society.

“It’s really a breath of fresh air for everyone on the board and the staff because it’s just money that we can use to help whomever walks in the door,” said John Floreancig, ILAS general counsel and CEO.

The 2020 campaign mimicked the 2019 fundraising by enlisting the help of volunteers. Partners and associates in law firms around Indianapolis were dubbed captains and recruited to walk the corridors of their law offices, telling their colleagues about the work ILAS does and asking for donations.

Last year the contributions from the annual event ticked up to $177,551, indicating the personal approach worked.

“I think that sense of walking around and putting an envelope on somebody’s desk or even if they go online to donate, it gets them more involved and there’s more interpersonal interaction,” Christie said.

The team of volunteers pivoted to virtual visits with fellow lawyers. Christie credited the success of the campaign to the captains in the law firms who not only solicited contributions but followed up with colleagues who maybe had forgotten to give.

“If they just sent an email and said, ‘Donate if you want to,’ it wouldn’t have gotten the same response,” Christie continued. “I attribute a lot of the success to all the volunteers who put their effort into it and the committee that spent many hours calling people, personally, for donations.” 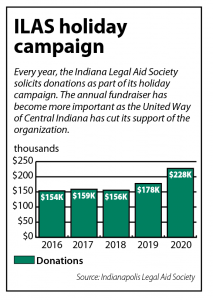 Campaign committee member John McLaughlin had his own story to share with potential donors. The partner at Parr Richey Frandsen Patterson Kruse was recruited by ILAS a couple of years ago to represent a client in a collection case in Boone County. He was able to negotiate an agreement that the man probably would not have been able to do on his own.

The experience “reinforced what many people forget is that the legal aid society is lawyers … that really help people,” McLaughlin said. He noted the clients turning to ILAS cannot afford attorneys but have legal issues that left unresolved will compound the problems for themselves and their families. “If they can help those people, I think it helps the courts, it helps society and it’s a very good thing.”

In recent years, the society has sought and secured more grants to shore up funding but Floreancig worries without a pool of unrestricted money, his office will be limited in who it can help. He does not want to turn away clients who have one kind of legal need because the grant makers have not targeted their support to that issue.

That makes the gifts from the holiday campaign even more valuable. With the donations, ILAS will be able to continue providing assistance to low-income clients on a variety of matters and, Floreancig said, fill an open lawyer position on the staff.

“It’s true old-school legal aid help money,” Floreancig said, explaining the holiday funds can be used to “help whoever walks in the door with a legal problem.”

The success of the campaign is still dwarfed by the need. More people are struggling and seeking legal help because of the pandemic-induced economic downturn. Also ILAS, itself, had a shortfall of roughly $200,000 going into the holiday fundraiser because the coronavirus forced it to cancel two other fundraising events — its annual roast and the continuing legal education seminar.

Christie is happy with the 2020 results but wants to do better in the 2021 holiday campaign. Both he and McLaughlin believe the event has the potential to bring in more donors and more contributions.

“The 100-plus volunteers we had, all the donors, these are lawyers in our community that understand the importance of the legal aid society that reached into their pockets and gave,” McLaughlin said. “Hats off to them. We’re very, very grateful and appreciative of them. But at that same point, I’m aggressive like Lee … we want to grow the campaign.”•