Home » Republicans win big in Indiana from Statehouse to courthouses

Editor’s note: This story corrects the contestants in the LaPorte County judicial race.

Although the results of the United States presidential race were delayed well beyond Election Night, Hoosiers learned the winners of several state and local races soon after the polls closed as Republicans secured their grip on state and federal offices.

Notably, Republican Gov. Eric Holcomb easily won reelection within an hour of polls closing across the Hoosier State. Not long after, Indiana was called in favor of President Donald Trump, awarding its 11 electoral votes to the Republican president.

Other races, however, took longer to declare a winner.

The most hotly contested U.S. House race in the state — the battle between Republican Victoria Spartz and Democrat Christina Hale for Indiana’s 5th Congressional District — was not over until late Wednesday, when Spartz was declared the winner.

Spartz, currently a state senator, claimed victory on Election Night, but Hale, a former state representative, declined to concede then. At the time, more than 100,000 votes from Marion and Hamilton counties had not been counted.

Spartz will succeed retiring Congresswoman Susan Brooks, keeping the District 5 seat for the Republican Party. Though the race between Hale and Spartz had been closely watched as an opportunity for Democrats to add to their House majority, Spartz’s victory maintains the GOP’s 7-2 advantage in Indiana’s congressional delegation.

In the Indiana Statehouse, the Republican Party retained its supermajority in both chambers. The Indiana Senate saw one upset, with Democratic newcomer Fady Qaddoura unseating Republican incumbent John Ruckelshaus in a district representing northern Marion County and southern Hamilton County.

Adams was one of three Hoosier judges suspended for their roles in a May 2019 early-morning brawl that resulted in Adams and Clark Circuit Judge Bradley Jacobs being shot. Crawford Circuit Judge Sabrina Bell was also involved in the incident, as was alleged shooter Brandon Kaiser and his nephew, Alfredo Vasquez.

Adams served a 60-day suspension and also pleaded guilty to misdemeanor battery related to the downtown Indianapolis shooting. Jacobs and Bell were each suspended for 30 days.

Jacobs was unopposed and re-elected while Bell was not on the ballot.

In other competitive Indiana trial court races, a few sitting judges were turned out and several new jurists were elected to fill court vacancies. Elsewhere around the state, according to unofficial vote totals: 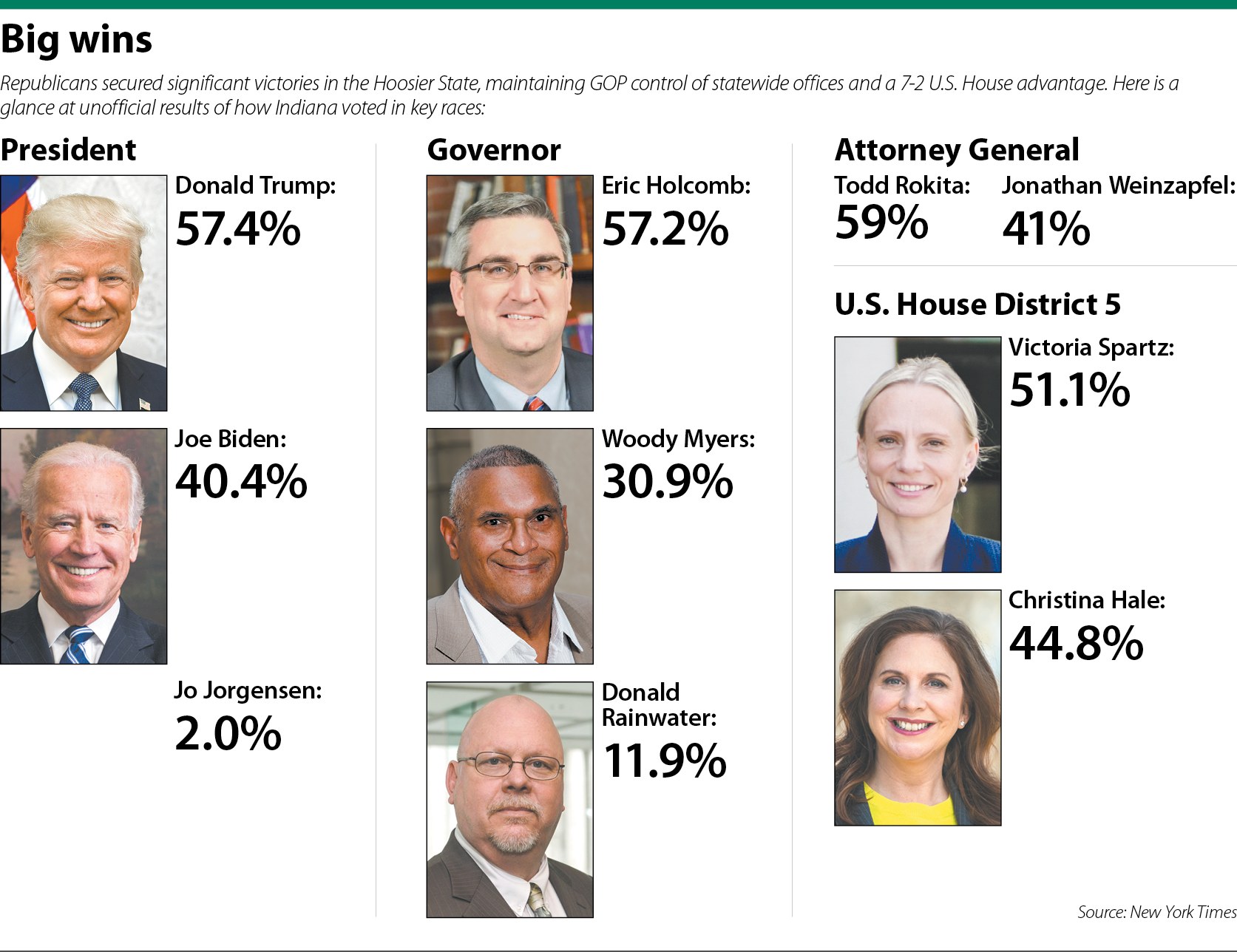 In Tippecanoe County, a different Republican named Dan Moore was elected as the first judge of Superior Court 7, which opens in January. Moore defeated Democratic challenger Jacque Chosnek, the Journal & Courier of Lafayette reported. In the race to succeed retiring Judge Laura Zeman, Republican Matt Sandy beat Democrat Matthew Boulac. And despite telling voters that because of health issues he would not serve if reelected in Superior Court 1, Republican Randy Williams defeated Democratic challenger Bryan Coulter.