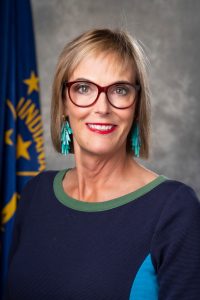 Indiana Lt. Gov. Suzanne Crouch started her long-anticipated bid for governor today with a campaign website that declares her candidacy.

The Indiana Department of Health announced Friday that booster doses of Pfizer’s COVID-19 vaccine are available to eligible Hoosiers following federal authorization of the additional dose.

The state said 2.47 million Hoosiers have been fully vaccinated against COVID-19. More than 2.62 million had received the first dose of a two-dose vaccination.

Indiana University announced Friday that all students, faculty and staff will be required to be fully vaccinated against COVID-19 before the fall semester.

Republicans win big in Indiana from Statehouse to courthouses

Although the results of the United States presidential race were delayed well beyond Election Night, Hoosiers learned the winners of several state and local races soon after the polls closed as Republicans secured their grip on state and federal offices.

The Indiana State Department of Health on Wednesday said the number of positive cases of COVID-19 in the state has risen to 35,712, following an increase of 475 cases.

The Indiana State Department of Health on Tuesday said the number of positive cases of COVID-19 in the state has risen to 35,237, following an increase of 407 cases.

The Indiana State Department of Health on Monday said the number of positive cases for COVID-19 in the state has risen to 11,686, following the emergence of 476 more cases.

Embattled Indiana Attorney General Curtis Hill announced on Thursday that he will seek re-election, setting up a potential Republican Party convention fight for the nomination in the spring.

Indianapolis Mayor Joe Hogsett on Friday announced the appointment of Donald “Donnie” Morgan as the city’s corporation counsel, as the city’s former legal department leader departed to lead the city’s Capital Improvement Board.

The Indiana Lawyer took home three awards Friday in the 2017 Best in Indiana contest hosted by the Indiana Professional Chapter of the Society of Professional Journalists.

An Indianapolis-area attorney who pleaded guilty to fraud and identity theft was sentenced Friday to more than six years in federal prison.

Bookkeeper pleads guilty to defrauding employer of over $315,000

An Indianapolis woman has agreed to plead guilty to fraud in what prosecutors say was a scheme that over two years nearly bankrupted her employer. The plea was announced Friday by U.S. Attorney Josh Minkler of the Southern District of Indiana, who said Erica Howard, 30, siphoned funds from a family-owned construction company in Franklin.

An Indianapolis lawyer who was suspended for two years without automatic reinstatement after his federal wire fraud conviction in a public corruption investigation involving former Marion County Prosecutor Carl Brizzi will once again be allowed to practice law in Indiana.