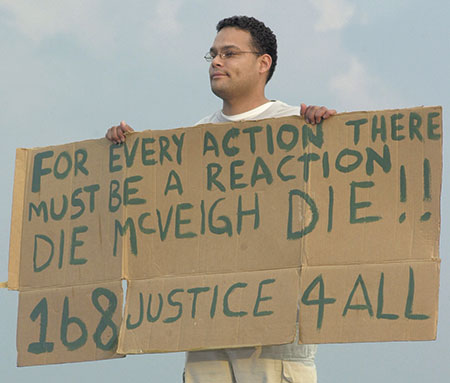 A death penalty supporter is among demonstrators at the Terre Haute federal prison before the 2001 execution of Oklahoma City bomber Timothy McVeigh. (Photo courtesy of Tribune Star/Joseph Garza)

With federal death row in its jurisdiction, the Southern Indiana District Court is preparing but does not know what to expect as the U.S. Department of Justice moves forward with the resumption of executions after nearly two decades.

“It’s all wait and see,” said Doria Lynch, public information officer for the U.S. District Court for the Southern District of Indiana. “It’s all up to the prisoners and their attorneys as to what course they’re going to take, if any.”

The watchful waiting began July 25, when U.S. Attorney General William Barr announced executions would again be carried out, starting in December. Barr directed the Federal Bureau of Prisons to clear the way for lethal injections by adopting a proposed addendum to the Federal Execution Protocol that would allow the three-drug method to be replaced with the single drug of pentobarbital.

In addition, the executions of five inmates, all housed at the federal prison in Terre Haute, were scheduled. The first three are slated to happen between Dec. 9 and 13.

“The Justice Department upholds the rule of law — and we owe it to the victims and their families to carry forward the sentence imposed by our justice system,” Barr said in a statement.

But some are skeptical the men will be put to death as quickly as planned.

In 2005, a group of federal inmates filed a lawsuit arguing the three-drug execution procedure violated their Fifth and Eighth Amendment rights. The case, Roane, et al. v. Gonzales, et al., 1:05-cv-02337, has languished in the U.S. District Court for the District of Columbia following a series of botched executions and shortage of the necessary drugs.

Monica Foster, chief federal defender of the Indiana Federal Community Defenders, expects the single-drug method will be challenged in court. Foster also anticipates a complaint will be brought against the federal government for greenlighting the new procedure of using only pentobarbital without giving the public the opportunity to comment, a move she called “pretty lawless.”

Despite the uncertainty, the Southern Indiana District Court is undertaking some preparation. Court staff are starting conversations and planning to meet with the U.S. Marshals and other entities to ensure they are “all on the same page” for whatever happens or does not happen, Lynch said.

Tim Morrison, former first assistant U.S. Attorney with the U.S. Attorney’s Office for the Southern District of Indiana, remembered McVeigh’s June 2001 execution. Morrison’s office was primarily tasked with monitoring security at the federal penitentiary as demonstrators converged in Terre Haute in the days leading up to the execution.

McVeigh’s notoriety “ginned up” the supporters and opponents of the death penalty, said Morrison, now an adjunct professor at Indiana University Maurer School of Law. The demonstrators were allowed on the prison’s campus, but the pro-death-penalty group and the anti-death-penalty group were cordoned off into separate spaces.

About two or three demonstrators were arrested, Morrison remembered. One man was arrested after he drove drunk onto the prison grounds and demanded to speak with McVeigh. The man was detained in federal custody for a few days on a misdemeanor charge.

Prison officials “just didn’t want people getting in the way of the execution,” Morrison said.

Describing the day Barr made the announcement as “very disappointing,” Foster is hopeful the push for executions will bring public scrutiny to death penalty cases. She asserted federal prosecutors on death penalty cases abuse the process and ignore the rules, comparing the level of federal prosecutorial misconduct to “drunken sailors on shore leave.”

A death penalty case she defended ended with a plea agreement in May after the Southern Indiana District Court ordered an unprecedented three-day evidentiary hearing. Her client, Andrew Rogers, was charged with capital murder after being accused of killing his cellmate at the Terre Haute prison. However, Rogers claimed he “begged” prison officials for psychological treatment prior to the incident but was given puzzles rather than medication.

The case, United States of America v. Andrew N. Rogers, 2:16-cr-00018, became ensnared in a sexual harassment scandal at the Justice Department’s Capital Case Section. In addition, Rogers’ prosecutors were found to have been withholding information that indicated the Bureau of Prisons was negligent in treating the defendant’s mental health conditions.

Now-retired Judge William Lawrence wrote in a June 2018 order that the government did not respond or provide any explanation as to why it did not pass along the evidence to the Rogers. “Accordingly, the Court is left with many unanswered questions, and the Government’s assurances that it understands, has complied with, and will comply with its Brady obligations ring hollow,” Lawrence wrote.

“I think there’s overwhelming bad behavior, and (the resumption of executions) is not going to increase the professionalism,” Foster said.

Foster was unsure whether the scheduled executions will add to her office’s workload. The inmates now facing death should all have representation, she said, but her office could be called upon to assist with any legal matters.

Asked about the potential impact on the federal prosecutors in Indiana, the U.S. Attorney’s Office in the Southern Indiana District referred the inquiry to the U.S. Department of Justice. The DOJ responded that it had no updates to the July 25 announcement.

The Federal Bureau of Prisons said it will continue with planning and taking administrative steps “to ensure executions are ready to commence on (the) designated dates.” 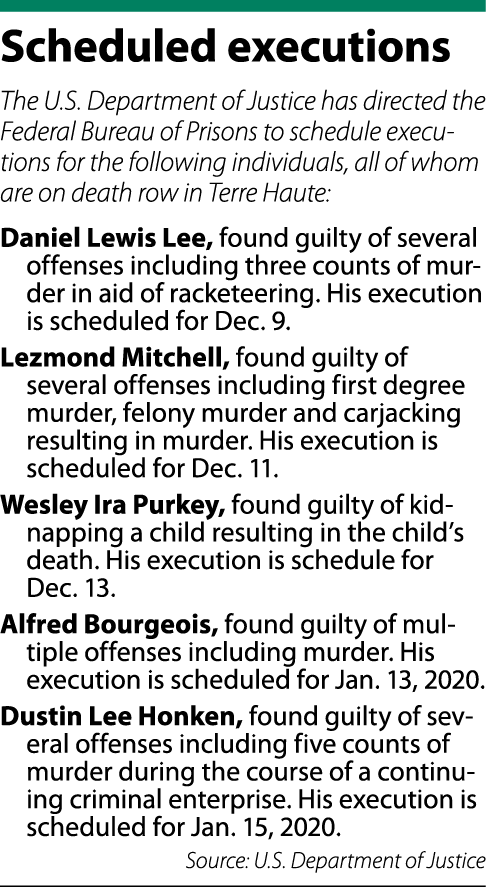 The Southern Indiana District Court already has one of the heaviest caseloads in the country, in part because of the civil rights claims filed by the inmates of the Terre Haute facility, as well as the state prisons in the jurisdiction.

An example of a prisoner claim was filed July 26 by Wesley Purkey, one of the five inmates the Department of Justice has scheduled for execution. Purkey’s typewritten pro se complaint asserts his Eighth Amendments rights are being violated because he has not been given proper dental care for his broken and ill-fitting partial plates, or for a broken tooth.

Whether the Southern Indiana District Court will see its docket grow because of the impending executions is uncertain. The Indianapolis-based federal court likely would not see any litigation directly related to the convictions of Purkey and the other inmates now facing execution dates, as those filings would be made in the jurisdictions where the men were originally tried and found guilty.

But the court would review any petitions the five inmates file under 28 U.S.C. 2241. Commonly referred to as habeas corpus claims, these petitions present a very difficult path to relief.

Indeed, the 7th Circuit granted a Terre Haute death row inmate’s 2241 petition in 2015 only after the court agreed to rehear the case en banc and only by a close 6-5 vote. The majority reversed the lower court, finding the plaintiff, Bruce Webster, should be allowed to present evidence supporting his argument that he has an intellectual disability.

Once Webster v. Daniels, 784 F.3d 1123 (7th Circuit 2015), returned to the Southern Indiana District Court, Webster was found to be intellectually deficient and, therefore, ineligible for the death penalty. The case was then remanded to the Northern Texas District Court for resentencing.

Webster remains at Terre Haute, where the Federal Bureau of Prisons’ inmate locator still has him listed as receiving a death sentence.•