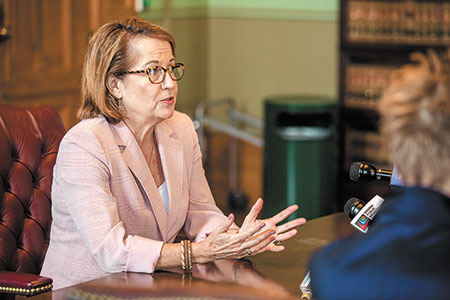 Ask the justices how they would describe the last five years at the Indiana Supreme Court, and they’ll tell you they’ve seen some changes. There’s been an internal reorganization, a major technology initiative and a national drug crisis to contend with, but they think their institution has successfully charted its path.

That’s what justices Steven David, Mark Massa, Geoffrey Slaughter and Christopher Goff told the Judicial Nominating Commission last month, when the four justices offered comments on whether Chief Justice Loretta Rush should be reappointed to another five-year term. Rush became chief in 2014, and Indiana law requires the JNC to appoint or reappoint the judiciary’s leader every five years.

Rush, Indiana’s first female chief, received unanimous support from the JNC. Before the vote, Rush also spoke to the commission about her first five-year term and her vision for her next term.

While her colleagues spoke highly of her leadership skills, Rush told the JNC and Indiana Lawyer that she sees ways in which she’d like the court to grow. She never set a specific policy agenda for her first five years, and as she looks to the next five, she likewise sees opportunities to build on the court’s current services.

Asked by the seven-member Judicial Nominating Commission whether they had any interest in being considered for chief, each of the four justices had the same answer: no.

“This is one of the many areas where our opinions are unanimous,” David, the longest-serving justice, told the JNC of his colleagues’ support for Rush’s reappointment.

Then, asked why they supported the chief’s reappointment, the jurists pointed to personal and professional attributes they said makes Rush an effective leader.

Rush told Indiana Lawyer it can be difficult to juggle her schedule, which is filled with court conferences, meetings, reviews of the cases that come before the court and time spent writing opinions, among other obligations.

Professionally, Goff said the chief is humble and does not rest on her laurels, but bold when it comes to advocating for Hoosiers. Dickson, who served alongside Rush on the court and preceded her as chief, also said she’s developed a “dynamic program” of initiatives designed to improve the Hoosier justice system. Such initiatives, the justices said, include the Coalition for Court Access, the electronic filing rollout and the judiciary’s response to the opioid crisis.

But in speaking to both the JNC and Indiana Lawyer, Rush attributes any success in those initiatives to the “collective us.” She told IL that the court is not five people just in making judicial decisions, but also in making administrative decisions that impact the entire judicial branch.

“My style of leadership is inclusive,” she told IL. “I’m getting their input on all major decisions and delegating different initiatives.”

Slaughter and Goff discussed the importance of the Supreme Court’s administrative role in their comments to the Judicial Nominating Commission. As a former trial court judge, Goff highlighted the importance of the court’s support on issues such as the development of problem-solving courts. Under Rush’s leadership, Slaughter said the court has come to a place where it can more fully embrace its policymaking role.

When she began her first term as chief, Rush said she didn’t have a plan for policies she wanted to implement. Instead, the issues that have commanded the court’s attention have naturally developed.

Among those issues is technology, specifically the completion of e-filing and the Odyssey case management system. Rush knows many were skeptical of the new technology at first — even Slaughter initially preferred paper documents over digital, she said.

But with all 92 counties now e-filing, Rush said the judiciary has been able to save significant money while making it easier for litigants, attorneys and judges to access documents without having to drive to court. And now, she added with a laugh, Slaughter loves to use his iPad.

The opioid crisis has also been a major part of Rush’s first five years, with trial court dockets flooded with drug cases and related issues, such as child welfare matters. The judiciary is limited in how it can respond to the drug scourge, Rush said, but she’s tried to pull levers available to her.

“I think the criminal justice system and the courts have a huge role to play in training about the disease component and looking at what treatment works,” Rush said, referring to the addiction side of the drug crisis. “You may think, ‘I don’t like medication-assisted treatment,’ but what does the science say?”

And then, of course, there’s the judicial aspect of being chief. The court meets in conference every Thursday, when Rush tries to find the “center of gravity” in the five justices’ views of the cases before them.

Some of Rush’s favorite issues involve the Indiana Constitution, allowing the court to interpret Hoosier law without federal influence. When she’s faced with a tough case, Rush said she’ll sometimes retreat to the canal to clear her mind and think through complex legal questions.

Though her colleagues gave her high praise, Rush was prepared to answer when the JNC asked her how the judicial branch can improve.

The first thing she pointed to was the judiciary’s response to the opioid crisis. Claiming the courts were caught flat-footed when the drug scourge began, the chief said she wants to use that experience to learn how to develop responses to future issues more quickly.

Rush also sees opportunities for additional technological growth. For example, she wants to explore the possibility of bringing online dispute resolution to Indiana.

Asked what they see on the horizon for the Supreme Court, David and Slaughter said they expect more work on access to justice issues. Access to justice is about more than helping pro se litigants, David said — it’s also about developing a fair and efficient system, a sentiment Rush echoed.

But as with her first term, Rush doesn’t have a policy plan for the next five years. Instead, she expects the court to naturally build on the initiatives it has in place, much like she’s done since 2014.

“I think we’re going to see a lot more in the next five years of what we’ve seen in the last five years,” she said.•