Home » Saying goodbye: Baker to retire after more than 40 years as a judge 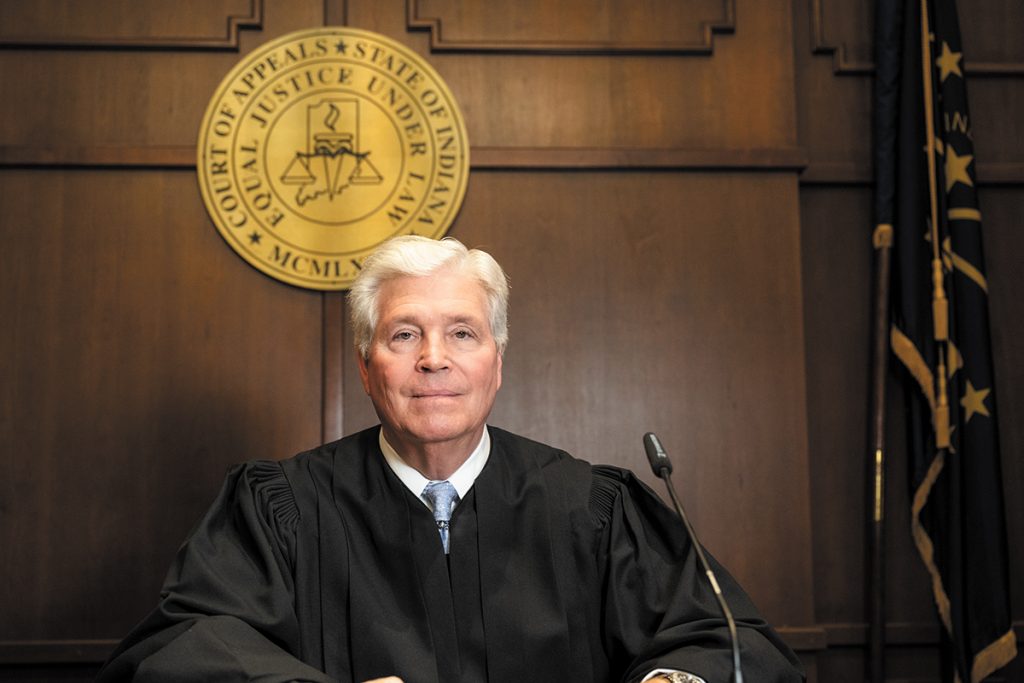 Indiana Court of Appeals Judge John G. Baker is retiring as the state’s longest-serving judge, capping a judicial career that began with his appointment to a new court in Monroe County. (Photo courtesy of Zionsville Monthly)

It wasn’t quite the retirement he expected.

With COVID-19 forcing most of the population to work from home, Court of Appeals Judge John Baker quietly visited the Indiana Statehouse in early June to pack up his chambers. He’s been working from his Zionsville home, and even though he won’t officially retire until July 31, he decided to close out his Indianapolis office early, without the usual pomp and circumstance of a sendoff.

It was a bittersweet day, Baker admitted, as he packed away 30-plus years of memories. The longest-serving judge in Indiana, including 10 years on the Monroe County bench, he plans to spend his days in Bloomington enjoying time with his wife while also working as a senior judge.

Baker has been “practicing” retirement in recent months, spending certain days working at home in the morning before heading to a restaurant and a movie in the afternoon.

“I wanted to work from home,” Baker said with a laugh, “but I didn’t mean for everyone else in the world to have to do it.”

The bulk of his career has been spent in a black robe, starting as a pro tem in the Bloomington City Court before becoming the first judge of the then-newly created Monroe County Court. Eventually he would help lead the effort to create a unified court system in Monroe County, which he says is now the paradigm for other courts to emulate.

The retiring judge is proud of the work he’s accomplished on the bench, both at the trial and appellate levels. One of his proudest achievements, he said, was his partnership with former Chief Justice Randall Shepard to create the Indiana Graduate Program for Judges.

Having been in the judiciary for four decades, Baker also had ample opportunity to work with the other two branches of Hoosier government. Both the Indiana House and Senate held ceremonies in his honor during the 2020 legislative session.

His impact on the bar is also not soon to be forgotten, as multiple candidates vying to be his successor have spoken highly of his body of work and engagement with lawyers.

As the Judicial Nominating Commission prepares to name his successor, Baker hopes whoever replaces him will bring to the bench a sense of industry, intellectual integrity, common sense and the ability to listen.

“And based on the people I’ve seen on that list,” he said of his potential successors, “they’re not going to miss me long.”

Baker recently spoke with IL over the phone for a look back at his long judicial career.

Q: Given how involved you were with the Monroe County courts, why did you decide to pursue the Court of Appeals?

A: During that time I was serving as president of the Indiana Judges Association, and that was before we had a really active lobbying process, which meant that I had to spend a great deal of time with the General Assembly. So what happened was, as I was patrolling the halls of the Statehouse, one of the judges on the Court of Appeals suggested that with Robert Neal’s retirement approaching in the next year, maybe I should give it some thought. I’d been labeled a Democrat for 13 years at that point, and nobody in the Democratic Party had been appointed. But then a man named Evan Bayh won the governor’s race in 1988, and those same fellas were a little bit more aggressive, so I gave it some thought. I was flattered and I thought it was interesting work, but I wasn’t sure if I was cut out for it. But I put my name in, and guess what? I got it.

You’re the most prolific judge in the history of Indiana’s appellate courts. How did you manage the workload?

Much of that was brought about because I’ve been there a long time – I was an appellate judge for 31 years. I’ve had wonderful law clerks since Day 1, and they have been some of the smartest lawyers I’ve ever worked with. I know some people can muse about cases, but I’m not that gifted. I’ve always had to do the best I could with what I thought was the right thing to do. After reading and hearing arguments and doing my own independent study, I would just do it and move on. I recall that in one year I would do more cases in a month than my colleagues on the Supreme Court did in a year. But they had to spend all their time managing the court system and attorney and judicial discipline rules. We didn’t have to do that.

I sought appointment to the Supreme Court twice and was a finalist in 1991. I sought it, but I didn’t get it — my point is that Providence was looking out for me, because I ended up where I needed to be. I enjoyed the volume of the work and its diversity. My colleagues on the Supreme Court spend a lot of time deciding what not to decide, but one thing the Court of Appeals does is, we don’t get to pick our inventory. Our process is, you don’t pick the cases you want to write on — you get randomly assigned to be the majority writer unless two other people don’t agree with you. I liked it and I still like it.

Given the pandemic, will you return to your chambers or finish your term at home?

I’m going to finish it out at home, in order to make it work because of the pandemic. I would’ve stayed until the last day — we had planned a nice retirement ceremony on July 30, but of course that’s all been continued indefinitely. When I retire, then somebody will move into my office. Mine is the nicest one to move her into, and the rookie — my replacement — will go into another office. All of that requires room changes, so I thought I’d help my colleagues by getting out of the way.

What’s been the hardest part of your job, and the best part?

The hardest part when I was a trial judge was sentencing, because often, because of the way the law was written, when you had to send someone to prison, it was just an acknowledgement of a failure on the part of society and other institutions that this person has to be warehoused. I struggled mightily in family law cases about custody. Finally, one of my colleagues said, “Baker, just settle down. If they’re silly enough to let you do it, just do the best you can. But if they’re good parents, it won’t matter.”

There is some isolation as an appellate judge, more than as a trial judge. When I was in junior high, I read a short story, “The Man Without A Country.” When I got to the Court of Appeals, I was a man without a county. I was living in Bloomington and working in Indianapolis … . That took some adjustment, but I adjusted.

What I like about the appellate process is working with other people, hearing their views on an issue, trying to be a good listener and, when appropriate, trying to convince them to see a different point of view. I’ve also enjoyed working with the brilliant, wonderful law clerks I’ve had over the years. And I enjoyed being a representative for the court and working with the legislative branch and the executive branch.

You’ve developed a reputation for engaging with the bar. Why has that been important to you?

Lawyers are problem-solvers, and I was just in a position to solve some problems that would not otherwise be solved. I always felt like lawyers were my teammates, and I enjoyed lawyers. I always felt that I could relate and help them understand the court system better and try to enlist their help in making changes. I don’t know that it goes beyond that — I just always thought that it was part of my job to enrich the bar and help the bench.•
Editor’s note: This article has been revised to correct Judge Baker’s place of residence and tenure on the Indiana Court of Appeals.