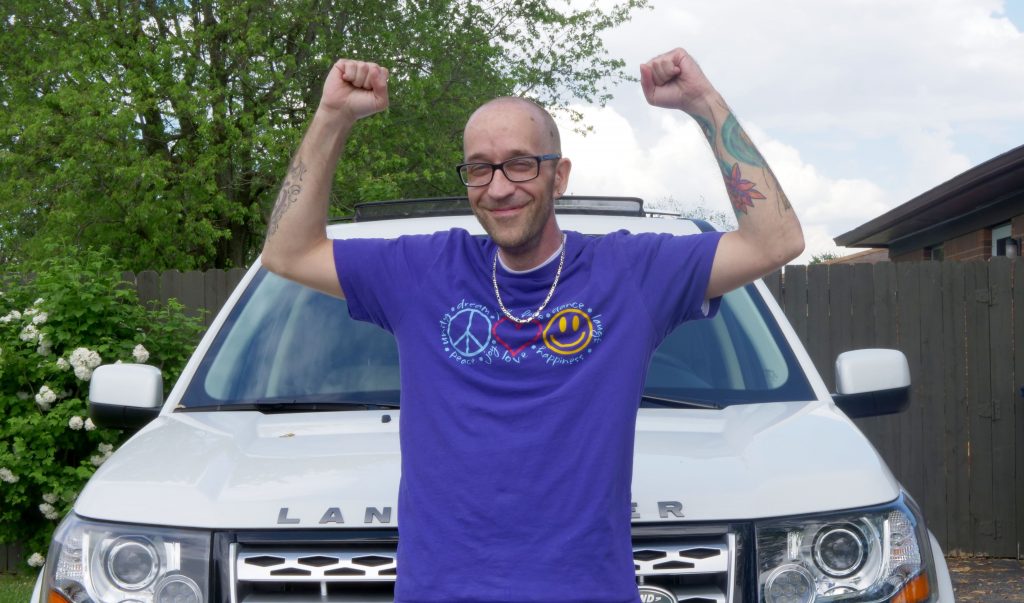 Tyson Timbs of Marion celebrates the return of his Land Rover, the seizure of which was the subject of a landmark civil forfeiture lawsuit decided by the United States Supreme Court. (Photo courtesy of Institute for Justice/Richard Tyson)

The Marion man at the center of an Indiana civil forfeiture case that went all the way to the U.S. Supreme Court reached a milestone in his case this week when his vehicle was returned to him. However, the court battle is not over.

Tyson Timbs returned home Tuesday to find his Land Rover sitting in his driveway. The SUV was returned to him after a Grant County trial court month determined the forfeiture of the vehicle was excessive under the Eight Amendment and ordered its immediate return.

“It was a weird feeling today,” Timbs said in a statement released through the Virginia-based Institute for Justice, which represents him. “I didn’t believe that the vehicle could be mine again until I got home and saw it in my driveway.”

The Rover was returned to Timbs almost seven years to the day after it was seized as part of a criminal action against him, who eventually pleaded guilty to dealing and theft charges.

Grant Superior Judge Jeffrey Todd first ruled in 2015 that forfeiture of the vehicle would be disproportionate to Timbs’ crimes, and the Indiana Court of Appeals agreed.

On remand, the Indiana justices developed a proportionality test, which Todd was instructed on remand to use in a new analysis of the forfeiture. Using that test, Todd ruled last month that forfeiture of the Land Rover would be excessive.

“At the time of his arrest Timbs was an unemployed addict with virtually no criminal record who sold a few grams of heroin to law enforcement,” Todd wrote in April.

“Although he was broke, he was ordered to pay fees and costs in excess of $1,200. Thereafter, the State sought forfeiture of his only asset; an asset he purchased using life insurance proceeds rather than drug money, and a tool essential to maintaining employment, obtaining treatment, and reducing the likelihood that he would ever again commit another criminal offense.”

Though the vehicle has been returned, the case is not over yet. Indiana Attorney General Curtis Hill announced after the trial court ruling that he would appeal “to defend the constitutionality of Indiana’s civil forfeiture laws.”

“We believe the trial court to be misguided in its contention that Timbs’ offenses were ‘victimless,’” Hill said in a statement, referencing another portion of Todd’s ruling. “To the contrary, we believe that dealing heroin is a very serious offense, and we believe that the devastation caused by the drug crisis across Indiana bears witness to this sad reality.”

The Institute for Justice, however, says Timbs’ case is an example of the flaws in the civil forfeiture system.

“As the court correctly recognized, the State’s ongoing campaign to take Tyson’s car is just the sort of abusive forfeiture that the Excessive Fines Clause is designed to curtail,” Sam Gedge, an IJ attorney representing Timbs, said in a statement. “The State of Indiana has now spent nearly seven years trying to confiscate a vehicle from a law-income recovering addict — and the Indiana Attorney General is still at it. No one should have to spend seven years fighting the government just to get back their car.”